The Socialist Rifle Association’s mission is to arm and train the working class for self-defense.

So we’re building a moat?

Is this the NRA playing a double game?

Are the means of production labeled on that map?

Gotta work on that market segmentation

It’s Time for Anarchists to Pick Up A Gun

“Guns and self-defense are firmly in the hands of one class and one ideology. It’s time to change that.”

I’m wary of the group, I don’t know if they are real or not, but Karl Marx did say that the workers should be armed.

To be able forcefully and threateningly to oppose this party, whose betrayal of the workers will begin with the very first hour of victory, the workers must be armed and organized. The whole proletariat must be armed at once with muskets, rifles, cannon and ammunition, and the revival of the old-style citizens’ militia, directed against the workers, must be opposed. Where the formation of this militia cannot be prevented, the workers must try to organize themselves independently as a proletarian guard, with elected leaders and with their own elected general staff; they must try to place themselves not under the orders of the state authority but of the revolutionary local councils set up by the workers. Where the workers are employed by the state, they must arm and organize themselves into special corps with elected leaders, or as a part of the proletarian guard. Under no pretext should arms and ammunition be surrendered; any attempt to disarm the workers must be frustrated, by force if necessary. The destruction of the bourgeois democrats’ influence over the workers, and the enforcement of conditions which will compromise the rule of bourgeois democracy, which is for the moment inevitable, and make it as difficult as possible – these are the main points which the proletariat and therefore the League must keep in mind during and after the approaching uprising.

I’m wary of the group

Most people I talk to in the left are wary of pretty much ANY group - and the more likely the group is to make a practical difference, the more wary they are. I don’t trust anyone either, but I think that it is destructive to the cause for that to prohibit any organizing whatsoever. Leftist’s readiness to dismiss anything and everything as false-flag, provocateurism, and/or factionalism has yielded a vast non-movement of isolated, alienated people.

It’s more “I need evidence that this group hasn’t been set up as a honeypot by the right” than an unconditional “I don’t trust you at all”. On closer inspection, the group seems to be about two years old so it is probably real.

The group isn’t for me though, I’m in the wrong country and am a person who should not be handed a gun under any circumstance (at least until my mental health improves). Too much of a risk of me deciding to kill myself.

I do know how to fire a gun and hit a (paper) target though.

I think I agree with your premise, but not your conclusion.

I can get behind the idea of armed socialists. We always talk about “when the revolution comes” and how we can fight oppression, but you know what? The revolution already came and it was the other side - the one with all the guns, that pulled it off. They did it under the pretense of rule of law in 2000 when Bush was elected, and they did it under the pretense of democracy when Trump was elected, both without the popular vote. They did it when the rigged all the districts to end up with a Republican majority in Congress that will last for the foreseeable future. As long as the majority of the military is right-wing, and when most of the right-wing in this country is armed, progressives, liberals, socialists… whatever denomination of the left you belong to, you will be able to do nothing to resist the deconstruction of our democracy.

If we don’t create our own democracy and our own military, there is no-one to blame but ourselves. People need to be more pro-active.

This still kind of feels like the kind of fight we’re unlikely to win with guns. If the military aligns with the right wing then they will always win in any conflict that comes down to a show of deadly force.

My conservative history teacher in high school liked to say that the purging of the Jewish ghettos during WWII would have gone very differently if the Jews had guns. Possibly so, but I suspect that the Nazis would have just firebombed the ghettos rather than give up and let everyone live in peace. 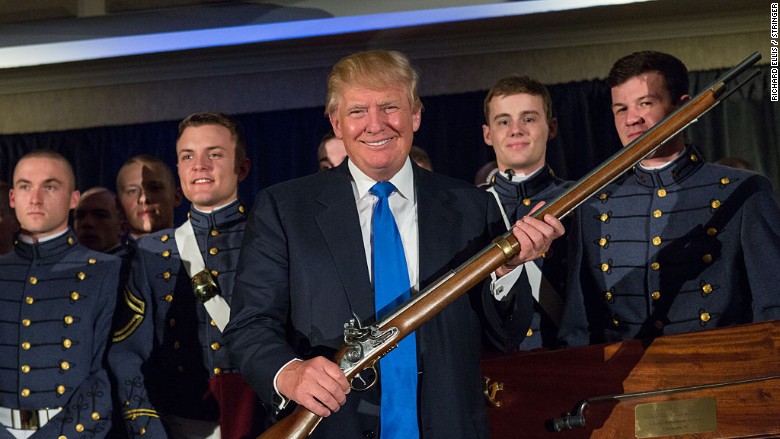 Gun sales are stuck in a Trump slump

This still kind of feels like the kind of fight we’re unlikely to win with guns.

YET people say that this is because somebody else has the force to back up their ideology.

If the military aligns with the right wing then they will always win in any conflict that comes down to a show of deadly force.

Because every military always wins? Not even. If they win because they are the military, then become the military. Or don’t - but impotently complaining that others are oppressing you if are not willing to fight back does not accomplish anything, either. It’s easy to complain about the right’s weapons, media, propaganda, institutions, etc - but where are yours? Or has the left been prevailing for the past few decades based upon righteous sentiment?

Because every military always wins? Not even.

The US military has tanks and drones and nuclear weapons and all manner of other weapons we couldn’t possibly obtain if we tried. A united American military will always win in any fight that comes down to who has the most weapons. The best hope in such a conflict would be to persuade some of the men and women who control those weapons to come over to the other side.

It’s easy to complain about the right’s weapons, media, propaganda, institutions, etc - but where are yours?

Bringing more guns into the community hasn’t exactly been a winning strategy so far. Police can literally get away with murder (especially the murder of a black person) just by saying they THOUGHT someone had a gun.

Possibly not. At least we know that the lumpen proles aren’t being targeted; what would be the point.