I first saw this on the future cop drama Almost Human.

Alternative headline: “Special eyeglasses make you even easier to track.”

I like the idea of tools to enable anonymity, but these glasses, unless widely adopted, just make you really easy to track. Just follow the IR emitters, or the reflective frames. Great for loosing yourself in a crowd if you are part of a movie plot and have recruited dozens of collaborators to all don the glasses, but less so in the real world. 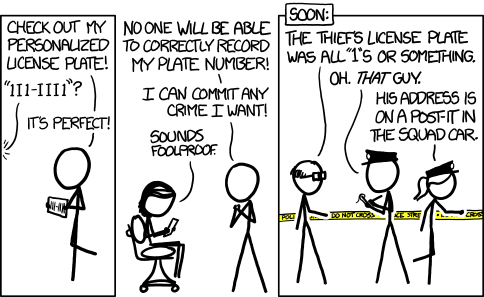 It’s a neeat concept, one that one day will be implemented effectively, but the sad truth is it doesn’t work:

How Not to Block Cameras

There has been an influx of projects on the internet claiming to protect an individual from surveillance cameras. Some use lasers. Others use balloons and static...

I’m getting a “502 Bad Gateway” message on the embedded link.

In the meantime, I’m going to share the article anyway

I remember an old documentary about the brain, which mentioned an experiment with using bright lights for camoflauge.

It reminds me of the use of bright lights for safety, so that people have to shield their eyes from turning cars and trucks, stopped schoolbuses, ambulances, police cars, etc.

“Special eyeglasses make you even easier to track.”

I have a pair of these somewhere:

Man I haven’t seen anybody make fun of Elton John’s glasses since I was a kid! Nostalgia…

'Twas not my intention.

How many face recognition systems use a flash? I would wager roughly none. How many cameras have at least a partial IR filter? Most of them would be my guess, at least during the day. Except the old Sony Nightshot security cameras.

You would do better with the glasses that have a fake nose and bushy eyebrows.