They know they’re just pissing the computers off, right? Because of these glasses, instead of just killing some humans, to ensure that they kill the right ones they will have to Kill All Humans.

Kudos, researchers, on taking the rest of us with you. Jerks. Some of us were looking forward to malevolent computer overlords.

Other notable figures whose faces were stolen include Carson Daly, Colin Powell, and John Malkovich.

This is amazing! Now I really CAN be John Malkovich!

You could generalize from these examples, people don’t like being judged by machines. There’s a threshold you don’t want to cross, between letting someone access a lock unsupervised, and “dammit, there really needs to be a human being in the loop here”.

I opened the comments looking for exactly this. Well done.

I’ve been expecting something like this for years. Next stop - surveillance state!

Should be quite a spectacle!

Seems like these features could be incorporated into a tortoiseshell design without being terribly obvious.

That was two stops back. We’re heading to the end of the line - nationalistic racist police state.

this is all I need to fool those systems! 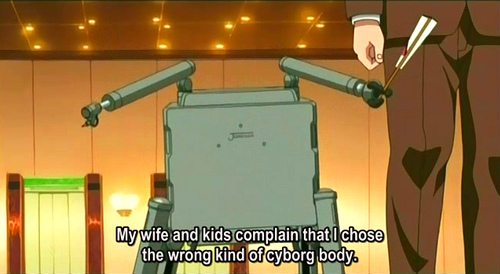 No likes for you!

Who's your celebrity doppelganger?

I tried this site:
http://www.faceplusplus.com/demo-search/
I got

#7, Nicky Wu, the Chinese dude is probably the closest…
Perhaps if they were morphed into one person - Pitt with Hoffman’s nose, Bale’s face shape, and Wu’s softer1 features? (I should have used the pic that got me mostly David Beckham matches – I assume that they have entered a limited database of white-dude celebrities)

1I always insist that I am ruggedly handsome, but the wife doesn’t buy it.

I got nothing but Chinese guys — including two Chow Yung Fats — except for Jake Gyllenhaal.

I’ve heard the case made -pretty convincingly - that what the Germans were about in WW2 was sort of a clunky rough draft for what the US has been experimenting with for some time.Names don’t mean much in this context, anyone can focus group a bunch of branding choices- what really matters here is where power is centralized.

If there was any doubt where the power is centralized after '08, then someone just isn’t paying attention.

What happened to centralise power in '08?

If you didn’t notice anything fishy going on back then with the banking industry, then I’m not going to be the one to wake you.