Squadrons is the Star Wars game I have always wanted

It’s long since time for another Star Wars flight sim. I sunk an unconscionable number of hours into the original X-Wing as a kid, so I hope this measures up. Visually, at least, it’s what I always wanted the X-Wing franchise to look like.

I kinda hope the multiplayer squadron stuff doesn’t impose itself too heavily on whatever single-player campaign they say there’s going to be, 'cause I’d much prefer flying with AI companions to having to coordinate friends or play with randos online.

I’ll preorder once I see (and like) gameplay. That trailer is very pretty, and I’m on board if it does what it promises, but I don’t know enough yet.

Will it be at least as good as my beloved Tie Fighter? That may be asking too much, but fingers crossed!

Sadly it’s an EA game, and they’re a publisher i do not support nor trust. That said i am glad to see the game and hope everyone that does decide to get it enjoys it.

Ohhhhh…shit… I assume this will be on the PS4?

I used to be one of the top 100 pilots in X-Wing vs Tie Fighter ladder ranking.

Looks like a total lack of creativity from the Lucas camp continues. 2020 (2021?) seems like a pretty long time to see a game for a 1977 movie, especially after all those other starwars games.

The characters look like taken from a children’s movie.
Still, the gap since X-Wing:Alliance has been way too long.

EA having sole rights to make Star Wars games combined with their terrible track record on lootbox fuckery in stuff like Battlefront is definitely why Squadrons is in my “cautiously optimistic” column and not my “instant pre-order” column. It all depends on how the single-player content ends up looking.

But what kind of game will it be? 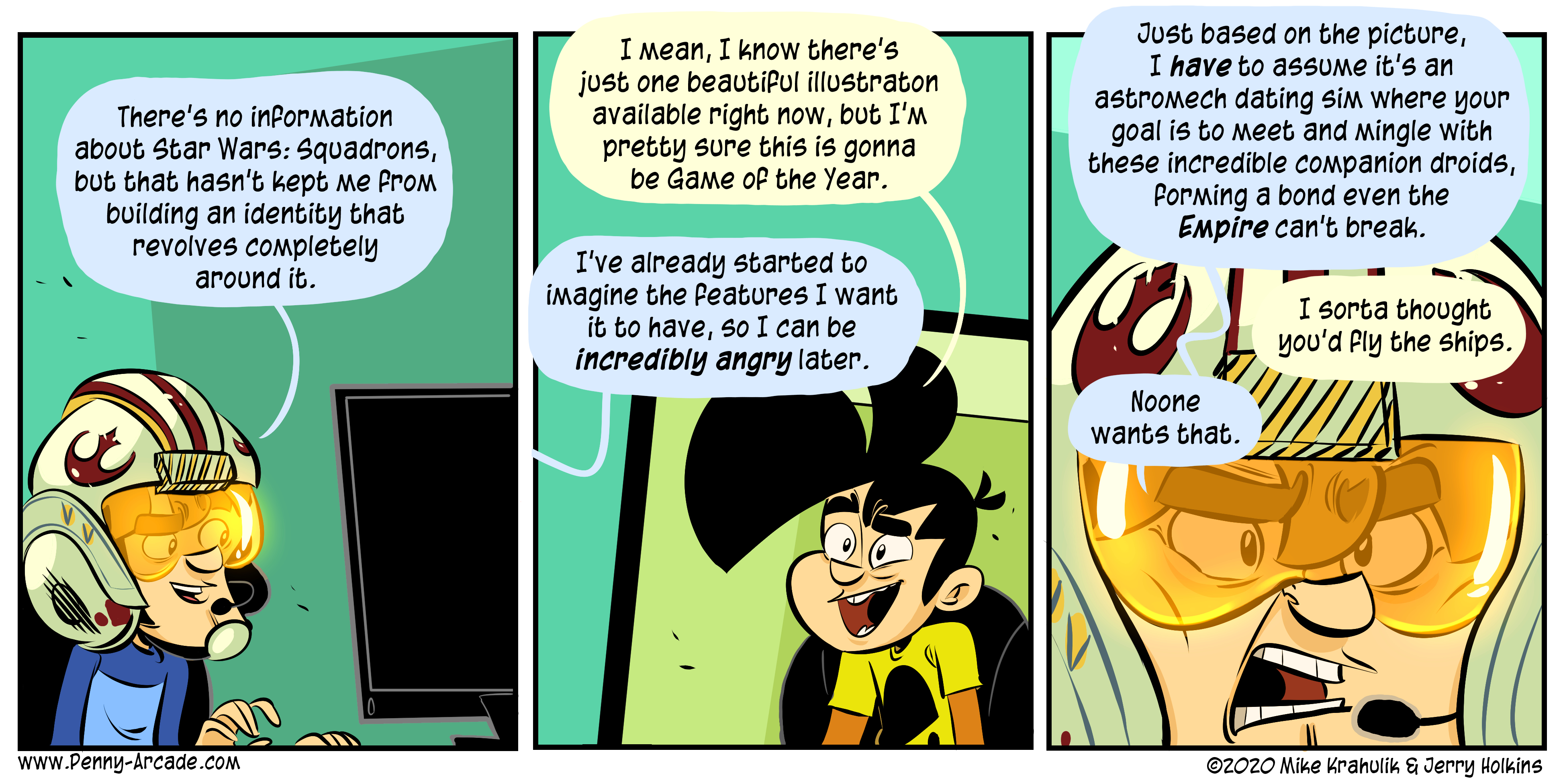 The last one was decent, which means that by law the next 2-3 must be dumpster fires in some way. They seem to have already pre-promised that all ship upgrades will be attained through gameplay, so at least the Battlefront debacle still haunts some executive’s fevered nightmares.

I’m tentatively excited. I’ve thought about going back to some of the classic Star Wars pilot sims, but get put off by the complexity of having to adapt the ‘90s PC joystick + keyboard controls to a modern console-style controller. An update to modern graphics, gameplay, and controls conventions sounds pleasant enough, though definitely still offers plenty of room to disappoint.

My preorder money is on LEGO Skywalker Saga. Those games are delightful. (And not out of EA.)

The $40 price point seems low, so that sadly makes me think it’ll have microtransactions or be incomplete on launch. Some “reviews” mention 5 x 5 squadron combat, which sounds like it’s imposing an artificial game feature on the story world. Preorder has items marked as rare and epic quality.

Upside is VR being available on launch, but that could make for some significant motion sickness depending on how it’s done.

My ideal would be to see the Assassin’s Creed team getting a license to make a Star Wars Mandalorian game, but EA’s deathgrip on SW licensing seems impenetrable.

They seem to have already pre-promised that all ship upgrades will be attained through gameplay, so at least the Battlefront debacle still haunts some executive’s fevered nightmares.

I doubt they much noticed the debacle outside of tamping down the PR. As they seem to make enough money doing this sort of thing by wedging it into everything.

Though I’m sure increased regulatory scrutiny has them being cautious.

But Disney is apparently pissed about the lack of games, the way Battlefront tarnished the brand, and the lack of return from the EA deal. Battlefront may have made something off all the BS, but not nearly as much for Disney as more games would have.

EA can get some meh out of Battlefront, so long as it brings in some money. Because they make tons off the overall portfolio of lootboxy yearly releases. But in 7 years they’ve given Disney one such game that didn’t live up to the prints money pitch.

Then you got the one two punch of that, followed by Fallen Order being very successful. A smaller, minimally “monetized”, single player, narrative heavy game of exactly the sort EA claims no one wants anymore.

It’s a pretty big indictment of the entire point of giving an exclusive license to a publisher like EA.

I mean… astromech dating sim? Shut and take my money…

At the ren fair I saw an R2-D2 corset. I told a friend he should get that for his wife. Then improved the setting.

You shut your mouth. Fans have wanted a good Star Wars space sim for decades. Good space sims have been scarce lately. It’s why people continue to throw money into the pit that is Star Citizen.

I hear you, and feel you. We are right to temper expectations.

To me even if the game ends up being good i have little reason to trust EA. It’s not like i’m rooting for the game or EA to fail, i want the game to be good and i hope that EA becomes less of a scumbag publisher/developer. However I’ve been burned by them in the past so on principle i do not buy or play their titles.

“Astromech dating sim” I am certain there’s a market for that.

I kind of deflated when I saw contrails off the wingtips of a TIE Bomber.

This is why “Star Wars” and “space flight simulator” are anathema to me. I have a growing repulsion of all of the ways the Rule of Cool has made a mockery of physics.

I definitely get where you’re coming from. I have a similar attitude toward UbiSoft, honestly. I’ll admit though, it’s been a lot easier for me to take a principled stand against a publisher because they don’t make games for my system anyway (I only recently got a gaming rig after over a decade of being off the Windows platform entirely, and we got a Switch last year, which barely counts…). If I get it (and that’s still something of a big if right now), it’ll certainly be in spite of it being published by EA.

Ubisoft used to be a developer i really admired but i’ve been less interested in them over the years. I haven’t bought any of their games for quite some time, not out of principle but just because i haven’t seen anything i had to play.