That’s awesome. The only danger at this point is that someone would put their sauce in a lookalike bottle, and then convince distributors that it’s good business to offer fake Sriracha. How do you suppose the internet would react to the news WalMart was offering knockoff Sriracha?

Even in the third world, where knockoff goods are much more common, I would bet internet users are doing some policing of their own - although a shady street vendor might have less at stake than WalMart.

I’m not sure this would work in every scenario. I have a tiny company that sells a very high quality type of cordage branded with our company name. Recently another company came along and claimed to sell the same product, even though theirs was inferior and unsafe for the intended application. The result was customer reviews saying our cord was inferior and not what we claimed it to be. It proved pretty toxic for us, and it’s the internet, so you can’t get that pee back out of the swimming pool.

I think Tran’s example is rock solid if you already have a ubiquitous, recognizable brand. For a little tiny company like mine, it’s not so clear cut.

As the owner of a very tiny company that owns no trademarks or other such imaginary property rights, I concur that having a lock on the market is a prerequisite for not having any trademarks. Fortunately, I also have a lock on my tiny market.

How you get there is usually luck plus hard work. In my case, a lot of luck.

How do you suppose the internet would react to the news WalMart was offering knockoff Sriracha?

Trader Joe’s already does it.

The techdirt piece makes it sound like this is a great business idea, in the sense it maximizes profits. Unfortunately, this story doesn’t really hold up to scrutiny, as we know that David Tran doesn’t seem to care too much about maximizing profitability. 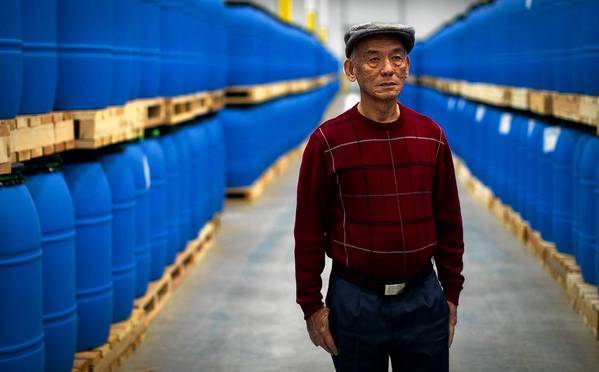 The gig: David Tran, 68, founded hot sauce company Huy Fong Foods Inc. in Chinatown in 1980 and a few years later introduced Sriracha sauce to the U.S. His Sriracha, a version of a hot sauce...

In more than two decades of operation, Tran has kept the wholesale price of his sauce constant, but he would not disclose it.
[. . .]
“My American dream was never to become a billionaire,” Tran said. “We started this because we like fresh, spicy chili sauce.”
[. . .]
He has repeatedly rejected pleas to sell stock in the company and turned down financiers who offer him money to increase production significantly.

The popularity of Huy Fong Foods’ Sriracha sauce has spurred many copycats and competitors. Because the sauce is named for the Thai city, the company cannot trademark the name.

He has a business model that works great for him, his family, and consumers. But it’s clearly not the way a purely profit-oriented business would be run, and the suggestion that he’s clued into some magic way to maximize profits that the big brands have overlooked is pretty silly.

“Because the sauce is named for the Thai city, the company cannot trademark the name.”

Tabasco is named for a state in Mexico and the pepper named for it. Given that it is the actual name of the plant it is made from, their trademark claim is considerably more sketchy.

What makes anyone think that Huy Fong’s sriracha is the original sriracha.
It’s not. It’s not even the best brand sold in the states.
The use of terms like “pretenders” and “rip-offs” is kind of disingenuous.
Maybe Tran really knows that trying to defend “sriracha” would be like trying to defend “catsup” or “mayonnaise”. Just because you only know one brand doesn’t mean that the product itself is all that unique. By naming something as sriracha, competitors are not using “his brand name” anymore than calling the egg/oil emulsion I make mayonnaise is using Duke’s or Hellman’s brand name.
I found this whole article in TechDirt to be oddly disconnected from reality.

Whenever I see articles about sriracha, at some point they say “…popularly called Rooster Sauce.”

I’ve been using this stuff for lord knows how long, and I’ve never once, ever, heard anyone actually call it Rooster Sauce out loud. Maybe “cock sauce” as a joke, but it’s been sriracha for as long as I remember.

yeah, me neither.
I hear people call it sriracha or siracha and, oddly, down by the coast in Texas, sirachi.
The jocular names cock sauce and rooster sauce are not anything I have ever heard in real life. On the intertubes, sure.

The only danger at this point is that someone would put their sauce in a lookalike bottle, and then convince distributors that it’s good business to offer fake Sriracha.

Unlike the name, Tran trademarked his rooster logo and distinctive bottle.

But it’s clearly not the way a purely profit-oriented business would be run, and the suggestion that he’s clued into some magic way to maximize profits that the big brands have overlooked is pretty silly.

He says it’s free advertising for a company that’s never had a marketing budget. It’s unclear whether he’s losing out: Sales of the original Sriracha have grown from $60 million to $80 million in the last two years alone.

Sure, a typical profit-oriented business would recognize there’s probably more money licensing the Sriacha name and likeness than slinging hot sauce. And after paying all the lawyers to negotiate deals to bring us Sriacha Doritos and Sriacha Double Decker Gorditas from Taco Bell, and paying the marketing efforts for both (think of the Superbowl Ads!), the big business would need to cut costs on manufacturing in order to maintain double-digit percentage profit growth.

Huy Fong is just one maker of the stuff whose brand happens to be (to me inexplicably) wildly popular in North America. They didn’t invent the stuff.

@nungesser @SeamusMitwurst, I just could not ever remember the name… I’ve been calling it rooster sauce for the past 18 years, so that is what it is to me.

There isn’t any reason not to call it that. Nor do I judge you poorly for doing so. I am not a stickler for proper terminology, except for sambal oelek, you better get that shit right!

Tabasco is named for a state in Mexico and the pepper named for it. Given that it is the actual name of the plant it is made from, their trademark claim is considerably more sketchy.

Well, that’s what the LA Times article said, and I assume they got this information in response to a question they put to Tran.

Unlike Tabasco, on the other hand, there are a number of other hot sauces sold under the Sriracha or Siracha name, many of which predate Tran’s.

That ain’t no cock, bub.