Seems to be working now.

It’s all very cool–the episodes look amazing–but what I don’t understand is how this allowed. Fan fiction is one thing, but this seems like a blatant violation of intellectual property. How have they managed to not have Paramount step in and shut this production down?

Paramount understands the importance of the fan community when it comes to Star Trek. They do keep a pretty good lock on the trademarks, but are very reasonable about licenses for merchandising and whatnot, and allow fans to do pretty much whatever they want as long as they don’t charge for it.

I used to work for a hypnosis show, and we did a Trek themed version at conventions. At one point, they found out we were getting paid for it and sent a cease and desist letter. We sent them back a copy of a letter we had received saying “love the show, keep up the good work”- signed by Gene Roddenberry. We never heard from the lawyers again. I’m quite certain that if it weren’t for that letter, they would have crushed us, but even a casual endorsement from the creator was enough for them to drop the matter.

Point is, they’re actually doing a pretty good job at balancing protecting their IP with letting the fans be fans (and GROW their brand).

I’m not surprised that their production looks as good as the original. After all, these folks are doing it on their own time rather than adhering to a weekly production schedule. And it’s quite likely that they love Star Trek more than the original production crew.

Paramount understands the importance of the fan community when it comes to Star Trek.

How rare - and how smart!

My kid likes anime, and sometimes we’ll go searching for a theme song or an excerpt on Youtube. They’re very often gone, and it’s not clear if it’s the Japanese studio or the American distributor or Youtube being a dick, but there’s a dick out there somewhere.

And it makes no sense, because if the opening sequence of your show is getting shared around on Facebook, that generates good publicity and gets people interested. Why on earth do so few studio executives get this? Did anybody ever, ever listen to the theme from Gilligan’s Island or whatever and say to themselves, well that plot’s spoiled, now I’m never going to bother watching the show?

I’d put a plug in that Star Trek Continues is a pretty amazing fan continuation of the original series. http://www.startrekcontinues.com/

They only have three complete episodes at this point, but this series feels more like the original series to me, whereas the Phase II utilizes more modern of special effects and themes (and a widescreen aspect ratio). Both fan series are great, but if you like Phase II, do yourself a favor and check out Star Trek Continues as well.

Oh, and Scotty’s real-life son plays Mr. Scott in this series along with Grant Imahara of MythBusters as Mr. Sulu.

I’ve been watching Phase II as they’ve put them out, and I’ve been watching Star Trek Continues, and love 'em both. They both have their charm, their rough edges, their pluses and minuses. Is it just me, or does the actor who plays Kirk on Continues looks a little like Michael Anthony Hall?

Yes, Star Trek Continues seems equally amazing, nailing sets, shots, lights, actors, story etc. with cool actors from the original series (or their offspring). And they seem better financed and on a faster track, with 3 episodes and 4 vignettes in 2 years.

Paramount should support this stuff and put it on the air, but maybe its best they keep their hands off.

I’m still trying to watch one of Star Trek Phase II’s episodes. Looks like they’ve been getting a lot of traffic.

This is good timing – I decided to try out Star Trek Online last weekend, as an MMO I could play with my 12-year-old stepson, and I’ve been wiki-binging on Memory Alpha all week.

The original production was also cheap, fast and nasty even for the time it was produced.

What I don’t understand is why the Phase II article doesn’t mention ST Continues at all when they seem about equal. So what else is out there? Are there more fan efforts close to these in quality?

One more thought–viewing one of the ST Continues episodes I was struck by what the original (and it) were able to pull off with a minimum of sets and FX.

I watched the 40 min “Fairest of them All,” a sequel to the classic Trek episode where Kirk and Spock switch places with their alternate selves in a nasty parallel universe. So this episode picks up with the consequences in the nastyverse and pulls off a taut, tense drama with just the right touches on moral issues that focus down to a few key phrases—“Kirk’s woman,” “All it takes for a revolution is one man with vision,” and “this revolution cannot be fought with the methods of the previous one.”

A half dozen sets, maybe a dozen parts, one photon cannon barrage on a planet, some phaser blasts and a great Kirk vs. Spock fight. Solid sf drama!

I believe this is a german mirror of some kind.

Award-Winning Fan-Film Series showing Season 4 of Star Trek: The Original Series, made by James Cawley and his team, continuing where Kirk and his crew had left off after three years of their original five year mission.

The difference is that there is a massive market for Anime theme music - the songs are sung by pop stars and a single season show can spawn multiple CDs worth of music.

Star Trek fan productions are productions made by fans using elements of the Star Trek franchise. Paramount Pictures, CBS, and their licensees are the only organizations legally allowed to create commercial products with the Star Trek name and trademark. The fan film community has received some coverage from the mainstream media. Star Trek fan films have been made since the 1960s by individuals and various fan groups but, before the advent of inexpensive digital cameras, editing and effects in ...

I loved Star Trek Continues. It seemed more in the spirit of the original than Phase Ii. Maybe it was the pseudo-technicolor grading that impressed me. Maybe was a certain actress’s well tailored uniform.

I’d also like to plug Star Trek Continues, who have managed to put out three quality episodes in about a year’s time. The attention to detail and the adherence to the aesthetics of the original show are what sold me. Those folks love and respect the source material and it shows. Nothing is being “re-imagined” or changed around. Everything is as it would have been if Star Trek had continued for a 4th season, which is why Star Trek Continues is now may favorite fan production. Check 'em out! 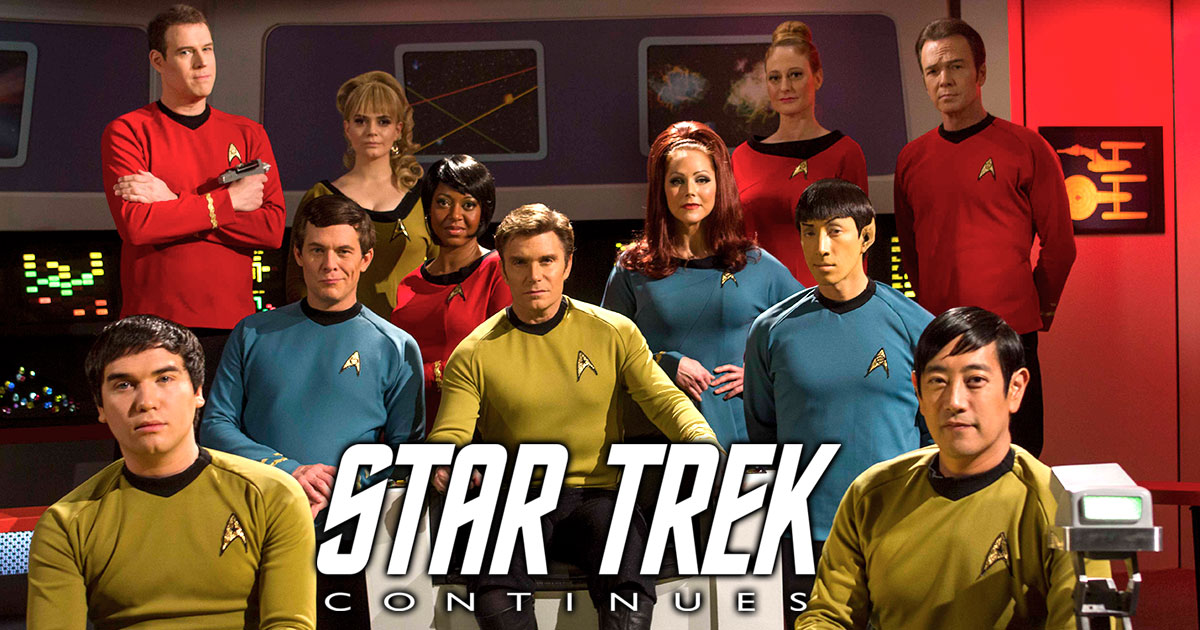 True, I’d forgotten about that. It’s been a long time before the “Theme from Hill Street Blues” went #1 in the US. But those anime songs are utterly unknown outside Japan (and geekdom), so there may be a better way to protect those profits - such as maybe letting Youtube drive DVD sales? It seems to work out for Paramount - or are they fools?