I love love love Big Brother from the same album that introduced me to Superstition: Talking Book. That whole album is really special.

Thanks for the reminder.

Just because a bunch of kids like myself had their brain forever changed and it’s too great not to link again: Stevie doing Superstition on Sesame Street.

The contentID system and abuse of copyright claims has once again shut down public participation in criticism and instruction : http://i.imgur.com/Ugksspx.jpg

I could swear I’ve seen Stevie Wonder breaking this song down himself. Does anyone have better google-fu than I do?

If no one had done so, I would be linking this. You’re dead right on this being a brain-changing moment.

My favorite bit of this clip is the kid in the red shirt at the top of the stairs at about the 4:10 mark.

Kid is definitely feelin’ the rhythm.

The video is working for me.

TIL about ‘Track separation and instrument recognition’

Music information retrieval (MIR) is the interdisciplinary science of retrieving information from music. MIR is a small but growing field of research with many real-world applications. Those involved in MIR may have a background in musicology, psychoacoustics, psychology, academic music study, signal processing, informatics, machine learning, computational intelligence or some combination of these. MIR is being used by businesses and academics to categorize, manipulate and even create music.

It’s obvious that the “live video” is bogus. Stevie is not playing the main clavinet riff. If it’s live, someone else is playing it off-camera. There seem to be a lot of left-handed guitar players on the session. That might be possible (there’s one shot with two guitar players, one left-handed and one right-handed). But the bass player is right-handed in some shots and left-handed in others.

The analysis is interesting, but it would have been more interesting if he had isolated and played the different parts.

Is that sax player Lou Marini, who was in the Blues Brothers as well as about a thousand other awesome bands? Looks a lot like him. 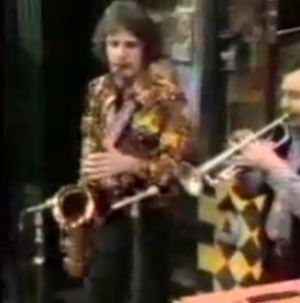 Lou Marini (b. 1945) is a musician, primarily a saxophone player but also other reeds, who has worked on several Sesame Street projects. He appeared on-camera as part of Stevie Wonder's band in his 1973 guest appearance on Sesame Street, playing sax...

Say what? I agree that Stevie doesn’t appear to be playing the clavinet riff. But I see only right-handed guitar and bass players through the whole thing. You’re talking about the Sesame Street video, right?

I too was totally gonna post the Sesame Street jam. 70s gold.

…Here’s a thought; I reckon this song could totally use re-writing to be a bit more topical…

And so on. Any takers?