This Sesame Street song made me cry

Man I haven’t seen that in forever. There were some awesome animated shorts on the ol’ 'Street back then.

I don’t recall that one, but it’s very reminiscent of “Capital I”.

Not quite how I remembered it, but still a classic:

An ending appreciated by Dubliners.

Here’s the original art version. I wonder why someone replaced the I with an S?

Thank you! That was so weird seeing a capital S in a video clip so engrained in my memory.

Huh. Uncharacteristically for Sesame Street, I don’t think the song taught a grammar lesson. Sometimes lower-case ns are lonely, so yeah, they like a companion n. Does that mean “runner” has happier ns than “banana?”

Usually these songs have, like, a useful message. Even if it’s just “don’t carry how many? coconut custard pies down the stairs?”

The lower case n song always had the same effect on me. The first time I heard John Grant on the radio, it reminded me a little of that song, one of the reasons it hooked me.

does anyone know about the history of the music for these? they sound like the same band, and i certainly remember seeing them when i was a wee lad in the 70s. and didn’t adam savage’s dad do animation for sesame street or something? nothing beats 1970s sesame street, that’s for sure.

The lowercase n passively accepts its fate instead of proactively seeking to remedy its situation by Climbing Down From The Hill, and is rewarded through the casual intervention of a complete accident. Clearly this is not at all suitable for modern audiences.

They were both recorded by Steve Zuckerman, who is still doing music.

I can’t recall the name of it, but I used to love the grocery shopping short where the little girls would recite the items on the grocery list at the market.
All I can remember is, “Chicken!”

I love the Capital I song! Thank you for this!

I wonder if this was the inspiration for Wonder Showzen’s depressed letter N? 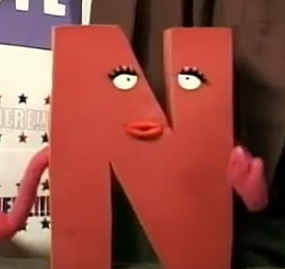 Letter N is a self-destructive personification of the letter, who was depressed and had sex with the Letter S, producing a small child, Letter i. She is a pink capital letter N, with two thin arms. She has two eyes and a mouth.

There was a video on Wonder Showzen of Letter N with a similar song to the one in the original post but I can’t find it on the Tubes.

Maybe this? This has always been a cherished childhood memory:

I love Sesame Street, and I always will.

Love matters, my friends, and it is powerful.

P.S. I get similar feels from “Capital i”…

P.P.S. Particularly adept video embedder? I would be grateful if you could embed the “Capital I” Sesame Street video for me, because I don’t know how, and I don’t care to either…Thank you in advance?