“One time, I heard a father in a meeting with married couples say ‘I sometimes have to smack my children a bit, but never in the face so as to not humiliate them’,” Francis said.

“How beautiful.” he added. “He knows the sense of dignity! He has to punish them but does it justly and moves on.” 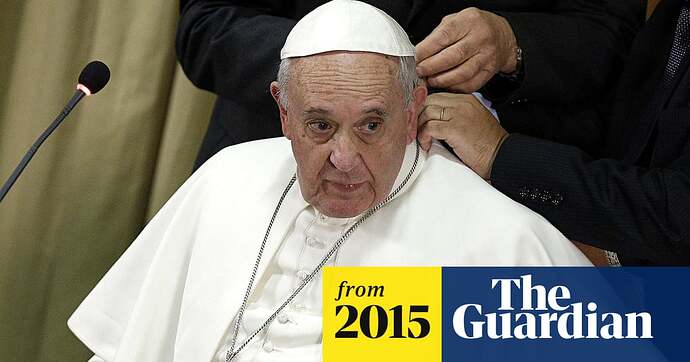 Or possibly Pope Goes The Weasel.

As for this Frankie bloke, my opinion remains unchanged.

I would consider myself an Antipope, but it turns out there already have been a bunch of those, and they just as much of religious nuts as pope classic.

Were those the Avignon popes?

The Avignon popes are considered antipopes. But the definition is basically anyone who says they’re the pope, but didn’t manage to seize the Vatican. There’s a lot of antipopes. Turns out it doesn’t have to do so much with a religious stance as a political one. “I should be pope instead of that guy” rather than “the catholic church is evil, and I’d be happy to see the pope tried for his crimes against humanity at the Hague”

I had an honest to Francis Eldridge Pope Thomas Hardy’s ale a few years ago. And no, there were no misspellings in that string of names.

It was okay, cost ten dollars, and I had to argue to buy it.

Magnificent beer. One of my all-time top when it’s good.

It was okay, cost ten dollars, and I had to argue to buy it.

Good price for it there. Properly kept and the right year you could pay upwards of 3 figures for a bottle.

Most expensive beer I ever had was the BrewDog Smokehead Porter I mentioned recently, which was like $25 a bottle, and wasn’t that good.

As a beer, it’s outstanding.
As an icon, with the scarcity of it, the history and how much of a collector’s item it is, the price is independent of the quality of the contents. Much like a lot of vintage wine.

BrewDog Smokehead Porter I mentioned recently, which was like $25 a bottle, and wasn’t that good.

I paid about that for a bottle of Cantillon a few years back.
Might not be worth it to some, but it brought back some good (and wobbly) memories of visiting the brewery. And I’m a sucker for a good gueuze.

It has really appreciated then, back in 2000 you could find it in whole foods in pdx. Most expensive beer I ever had was a Cantillon from the original brewry (an early 90’s vintage)–$75 which happened to be exactly the same amount as my food per diem for that day (I didn’t eat, I enjoyed one beer

I’m not a fan of most BrewDog stuff if I’m honest (I’m looking at YOU ‘Punk’ IPA). A good friend of mine is one of their master brewers, and I gripe at him about it, but they won’t change to suit my tastes. Jerks.

I’m not Catholic, but I’ve been very angry at the entire church since the whole pedophilia scandal started leaking out and the more I learned about what they covered up and how, the more I get angry.

The last straw with me was when they excommunicated the mother of an 8 year old girl whose dad had raped her and her mom helped her to get an abortion.

So, yeah, new pope guy seems better than the last but I am no fanboi.

drink from the dog before all Dons games

This topic was automatically closed after 743 days. New replies are no longer allowed.