"Synthetic weed" poisoning on the rise, because non-poisonous weed is illegal

What I don’t get is that people were hospitalized after using this the past year in Colorado. If you can’t cop the real thing in Colorado, you’re an idiot. Anyone who’s over 21 can legally buy it at a store, if you’re not I’m sure it’s trivial to find it through another channel, like an ad on craigslist.

Employment drug testing is the problem there, I believe. It might be legal, but if it gets you fired…

Some of those that were made ill were under 21. My SO knows one family affected and that’s the case there. Also, some take it so they don’t end up with a positive drug test. Some businesses in CO still drug test for marijuana and fire (or don’t hire) people based upon THC levels. Also, some of the kids simply didn’t expect something sold over the counter like that to be dangerous.

Yet more reasons to legalize marijuana usage across the board within the entire United States at a federal level. And also the need to spread information on the dangers of certain synthetic drugs.

if you can’t cop real weed in Colorado when you’re under 21, you’re an idiot. Also, legalizing pot at a federal level wouldn’t haven’t have done anything to help in that instance.

if you can’t cop real weed in Colorado when you’re under 21, you’re an idiot.

You’re just repeating yourself without addressing any of the nuances I mentioned.

legalizing pot at a federal level wouldn’t haven’t have done anything to help in that instance.

Sure it does. Drug testing happens in Colorado as I already explained to you. When marijuana is legalized at a federal level, drug testing for marijuana will be effectively neutered. It would be like drug testing for legal pharmaceeticals. If you don’t hire or fire someone for taking a legally prescribed drug, you will face a discrimination lawsuit.

Also, except in the rarest of circumstances do businesses test for alcohol consumption – once marijuana is no longer Schedule 1, nor illegal at a federal level, etc., we won’t see near as much testing for it. It’ll basically be like alcohol.

If you’re referring to the age of the kids who took the synthetic crap, keep in mind people under the age of 21, etc. get drug testing for employment, etc. as well.

It’s currently a fucked up situation at a state level: 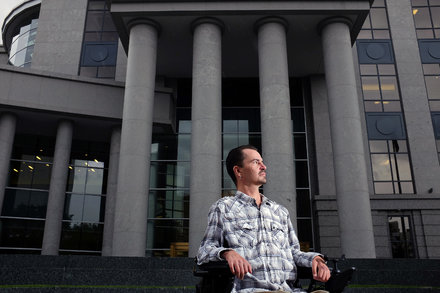 Workers Can Be Fired for Marijuana Use, Colorado Court Rules

In a blow to marijuana advocates, the Colorado Supreme Court found that a satellite-television provider acted within the law when it fired an employee after he failed a drug test.

“The federal government has in many ways the last say,” said Sam Kamin, a law professor at the University of Denver who studies legal issues swirling around marijuana’s growing place in society. “As long as that federal prohibition is in place, the states can only do so much.”

We need to legalize pot at a federal level now.