Tesla bursts into flames on highway, leaving nothing but metal debris behind (photos)

Originally published at: Tesla bursts into flames on highway, leaving nothing but metal debris behind (photos) | Boing Boing

This is what Twitter’s server center is going to look like come Monday.

No fanbois explaining to us why this worked as designed? No? Good.

So I guess don’t park them in a garage, until they get that bug worked out.

I think they’ve beaten the Ford pinto on that count

I dunno how to make oneboxing work from my phone but it’s an interesting long-form read.

I think they’ve beaten the Ford pinto on that count

Everyday is a new opportunity.

There’s got to be a better method for fighting these kinds of fires. Thousands and thousands of gallons of water of hours couldn’t help.

I wonder if they’ll censor this story on Twitter.

I had a friend who had this happen to him, conventional car, no clear reason why. He was on his way to a karate camp where he was testing for 3rd Dan. He lost everything, except the clothes on his back and his phone, but we fed and clothed him for the weekend. I always thought it excellent symbolism, burning away his 2nd Dan identity and emerging like a phoenix as a higher form. I suggested putting incendiary devices in the cars of other testing candidates, so they can also learn to undergo a trial by fire and to eschew personal possessions, but implementation could be problematic.

The water is there only to try and cool things down, as lithium fires are exothermic in nature, and produce their own oxygen as a result of the chemical breakdown.

There’s some guidelines, most of which consist of “wear PPE and dump massive quantities of water on it to slow the reaction down” at least: 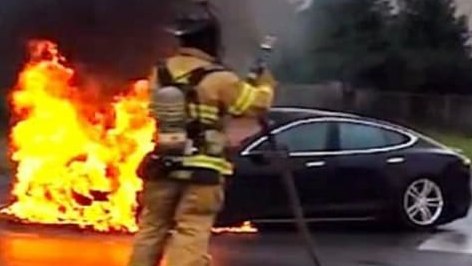 What firefighters need to know about electric car batteries

There’s got to be a better method for fighting these kinds of fires. Thousands and thousands of gallons of water of hours couldn’t help. 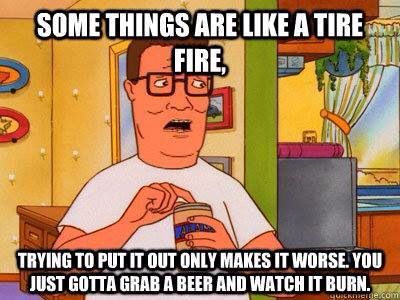 The water is there only to try and cool things down

That makes sense; if you can’t stop the vehicle from burning you can at least try to stop it from turning the road and other surroundings to slag.

Seems the answer to the question “what do we do about all the gas-guzzling, carbon-emitting cars?” was not “replace them with electric vehicles” but “get rid of them and improve public transportation or work from home” after all. 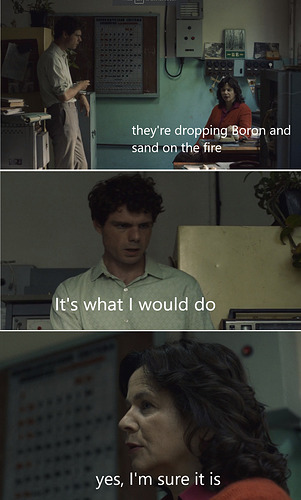 Well, the Musk fanbois are starting to resemble/overlap with the Trump and Q group, so I imagine their explanations will soon start resembling “Worked as designed something something deep state something free speech! mumble mumble so stop talking about this!”

Don’t worry though, I’m sure they can find out what happened by downloading the logs off of the on-board compu… oh… right. Well, maybe it did work as designed? In a get rid of the evidence sort of way.

I’ve wondered about this before, as it’s not the first time lithium batteries’ enthusiasm for fire has come up, and they’re only getting more common.

It’s interestingly similar to the problem with nuclear reactors, in that there’s no passive way to make it safe. You have to actively remove the heat, or one failing cell will melt the next cell, causing that to self-discharge and melt, etc., until all the stored energy is used up. And any kind of active cooling system is prone to being destroyed by the heat, or by whatever accident damaged the lithium cells in the first place. Probably all firefighters hope to achieve with hoses is to limit the damage to the road.

I have a feeling the solution will end up being similar: a ton of preventative safety measures that make the system heavier and more expensive.

ETA … though I also wouldn’t be surprised if there were relatively easy risk-mitigation strategies that EV makers, and especially Tesla, aren’t doing yet. If there’s a way to make batteries twice as safe and 5% heavier, Tesla’s not going to do that until someone makes them.

I’m not a fanboy but I can explain it. The lithium NCA batteries used in the cars (as opposed to the LFP batteries used in BESS stations in Megapack 2XL’s) are pretty volatile. The Tesla fire strategy in general is “burn it to the screws” in the words of a colleague - i.e., lithium fires are unstoppable once thermal runaway has started, and it’s better for the battery to burn off completely (leaving no primary chemicals, no floating charges, and no chance of re-ignition.) Of course, if you remove enough heat you definitely can stop even a thermal runaway - you just need a ton of water.

Anyway, the Tesla crew uses the reality distortion field of “really smart disruptive technology” to claim that fire suppression systems are unnecessary… and they don’t provide a code required fire detection system on their grid connected batteries, because they’re so much smarter than everyone else and their tech always prevents fires before they start.

Fire people hate “smart technology” as a solution to life safety problems. Anyway, as a way to make most code inspectors piss off they’ve got a bolt on after the fact fire detection system that I can’t discuss due to NDA but… well, I asked the Fire Marshall of California why it was allowed. Then they tried that “I’m smarter than you” stuff on FDNY (Fire Dept of NY City) who told them to go fuck themselves, and the NYC solution is… a massive amount of water. They then use their ability to “build in NYC, the most stringent fire code in the country” everywhere else… not mentioning that it has all of the stuff that they don’t typically provide anywhere else.

Not a fan.
Simplest explanation - got to 88, forgot to plug this in: 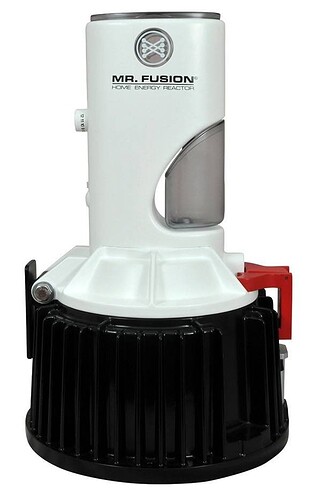 That was GM’s solution with my Chevy Bolt for about a year and a half, until they replaced the battery pack.