That '100% pure' Parmesan Cheese you're enjoying may contain wood pulp

Doesn’t ‘up to a year in prison and $100,000 fine’ seem really light for activity that is both a violation of FDA standards on food labeling and adulteration and a really substantial amount of fraud against anyone who purchased the misrepresented product?

I can certainly see an emphasis on food safety standards as a distinct regulatory activity, given the tendency of lapses there to cause assorted nasty outcomes; but I would have imagined that that much fraud, alone, would be worth a nontrivial criminal smackdown and quite possibly a ruinous battery of civil litigation from everyone you’ve been selling to.

Uh, why is she receiving a nice, round numbered fine? Shouldn’t fines assessed against fraudsters be some multiple greater than 1 of the profits they reaped?

Wouldn’t that be the only sensical way to deter fraud without creating a perverse incentive?

I have just the wine pairing to go with this!

The 1985 diethylene glycol wine scandal was an incident in which several Austrian wineries illegally adulterated their wines using the toxic substance diethylene glycol (a primary ingredient in some brands of antifreeze) to make the wines appear sweeter and more full-bodied in the style of late harvest wines. Many of these Austrian wines were exported to Germany, some of them in bulk to be bottled at large-scale German bottling facilities. At these facilities, some Austrian wines were illegall Th...

And some lovely beef for the main course.

The 2013 horse meat scandal was a scandal in Europe in which foods advertised as containing beef were found to contain undeclared or improperly declared horse meat – as much as 100% of the meat content in some cases. A smaller number of products also contained other undeclared meats, such as pork. The issue came to light on 15 January 2013, when it was reported that horse DNA had been discovered in frozen beefburgers sold in several Irish and British supermarkets. The analysis stated that 23 out ...

So this is only about pre-packaged shredded Parmesan cheese, and not an actual chunk of cheese you grate yourself (as pictured)?

I too would like to know this. Are we just talking about that powdery crumbly stuff? Cuz I always get the oddly cut slabs from trader joes or wherever. (Ive found the pre-shredded and big name triangles always kinda suck). Or are my odd cut chunks victims of this too?

Let’s think about this 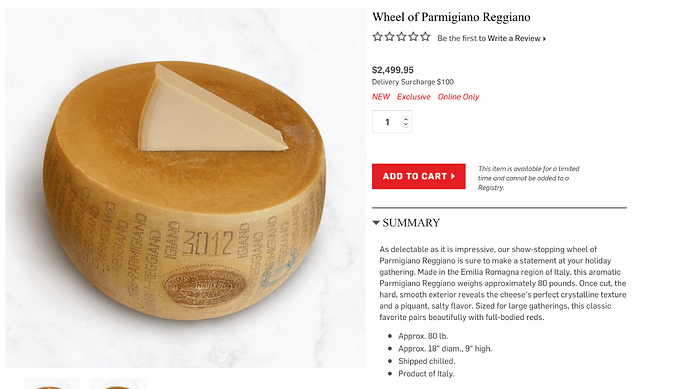 You think that maybe, just maybe Kraft is playing fast and loose with what it calls Parmesan?

If you each chunks of Parmesan-- and seriously, the Parmesan you buy should be good enough to eat as chunks, the real stuff has this crystaline structure that’s simply not present in the Wisconsin imitation–

In the US, Parmesan isn’t a protected term, is it?

IIRC, In the EU, it can only be used on actual Parmigiano-Reggiano, but in the US, it doesn’t have to…?

Parmigiano-Reggiano | Name use and generic parmesan

The name is legally protected and, in Italy, exclusive control is exercised over the cheese's production and sale by the Parmigiano-Reggiano cheese Consorzio, which was created by a governmental decree. Each wheel must meet strict criteria early in the aging process, when the cheese is still soft and creamy, to merit the official seal and be placed in storage for aging. Because it is widely imitated, Parmigiano-Reggiano has become an increasingly regulated product, and in 1955 it became what is k...

Within the European Union, the term Parmesan may only be used, by law, to refer to Parmigiano-Reggiano itself, which must be made in a restricted geographic area, using stringently defined methods. In many areas outside Europe, the name “Parmesan” has become genericized, and may denote any of a number of hard Italian-style grating cheeses,[14][15] often commercialized under names intended to evoke the original: Parmesan, Parmigiana, Parmesana, Parmabon, Real Parma, Parmezan, Parmezano,[16] Reggianito. After the European ruling that “parmesan” could not be used as a generic name, Kraft renamed its grated cheese “Pamesello” in Europe.

Kraft could fully admit that they make their cheese out of fresh grated corpse wax and I’d still buy it. It’s my slurm of spaghetti/pizza toppings.

the pre-grated and dry Parmesan is seriously awful, I respectfully suggest if you have never tried the real stuff, buy a chunk and grate it over your pasta, it’s fran-friggin-tastic

It isn’t a ‘geographically protected designation’ in the EU style; but various types of cheeses are legally defined in CFR Title 21 Part 133.

Team Fed doesn’t care about the product’s unique cultural heritage, terrior, and whatnot, so you can make ‘Parmesan’ if your bit of Wisconson so moves you; but there are a variety of properties you can’t get away with creativity in implementing; at least not without having to label the product as something other than one of the defined food items(this is why the slightly sinister ‘process cheese food’ haunts America’s shelves).

Well… Processed Cheese Food is a lot like LemonHeads. It’s definitely not cheese, and LemonHeads aren’t lemons, but they’re both approximations of the real deal.

And honestly, PCF is decent for things like the “cheeze” on a cheeseburger. It’s more plastic than real cheese.

I only enjoy non-Newtonian cheese foods.

Most of the pre-grated ‘cheese’ has corn starch or other anti-clumping gloop mixed in to make sure the ‘cheese’ shreds stay separate. 8% sounds like they are shaving some costs to tune up their profit margins. Of course it’s a good idea! PROFIT! Share price is ALL! Mammon our only GAWD! All else is Bernie Sanders Comoonism.

And yes, the pre-shredded stuff is nasty compared to a real stinky parm. mmmmmm

As a young man I once printed a project for the Bronx Zoo and the printer took us out to lunch at a Little Italy place. Really good. At one point in the meal a guy comes up to the table with an enormous wheel of cheese and a grater. Cheese boy would hold the big wheel over your plate and shave paper thin sheets of the stuff over your dish. I wanted to tell him, just leave it.

Yes. And none of the articles I’ve seen bother to point that out aside from eventually quoting the relevant part of the expose somewhere down page. Which is frankly just sensationalism.

And no one should be buying preheated parm/hard cheeses anyway. Flavors die quick packaged like that. And it’s long been known they’re less likely to be real or pure parmesan.