Some people would pay extra for that kind of action

Buying a Saarinen knock-off chair is something that only happens once. Believe me I know.

Believe me I know

If I may ask, were you shafted?

It's time to learn the difference between design and mere style.

Ha. My ex and I had 4 Eames chairs when we lived together. I bought a set of 4 on Amazon for less than $200; they’re nearly indestinguishable and she still thinks mine aren’t knockoffs.

It would have been really ironic if that chair had been in a proctology office’s waiting room.

But I do hope no one was hurt when the chair suffered its catastrophic failure.

Really? Link, please. I have a fake Eames that is on its last legs. It is upholstered in cracked vinyl and the base is about to snap, but I love it desperately. If I ever get rich, a real Eames is top of the list, but in the meantime…

EDIT: Oh, I see. You were referring to the molded chairs. I have the (fake) recliner. They run about $800.

You sure it’s Saarinen? Looks like a Bomba chair to me.

My coworker plopped down on his couch at home, somehow a steak knife was stuck between the pillows… pointing up.

Lots of blood and pain, only got the fat part, missed all his vital giblets.

Can’t wait to show him this post so he can relive his previous trauma.

That’s pretty horrifying. I will never trust my couch again, it might try to kill me some day too.

I remember seeing part of a 1986 horror movie called Crawlspace about the crazed son of a Nazi doctor who abducted people and tortured them to death.

One of the depraved ways he murdered people was with a booby-trapped chair that did something like that.

Well, that’s a ‘fail’ that you don’t see everyday.

Before the failure, the color of the chair was white.

Anyone remember the Cyanide and Happiness strip about a Pedo-stool?

That’s a cracked pelvis right there. Or worse.

Franquin (a Belgian comic artist) actually had a comic strip about it which was published in his “Idees noires” series. 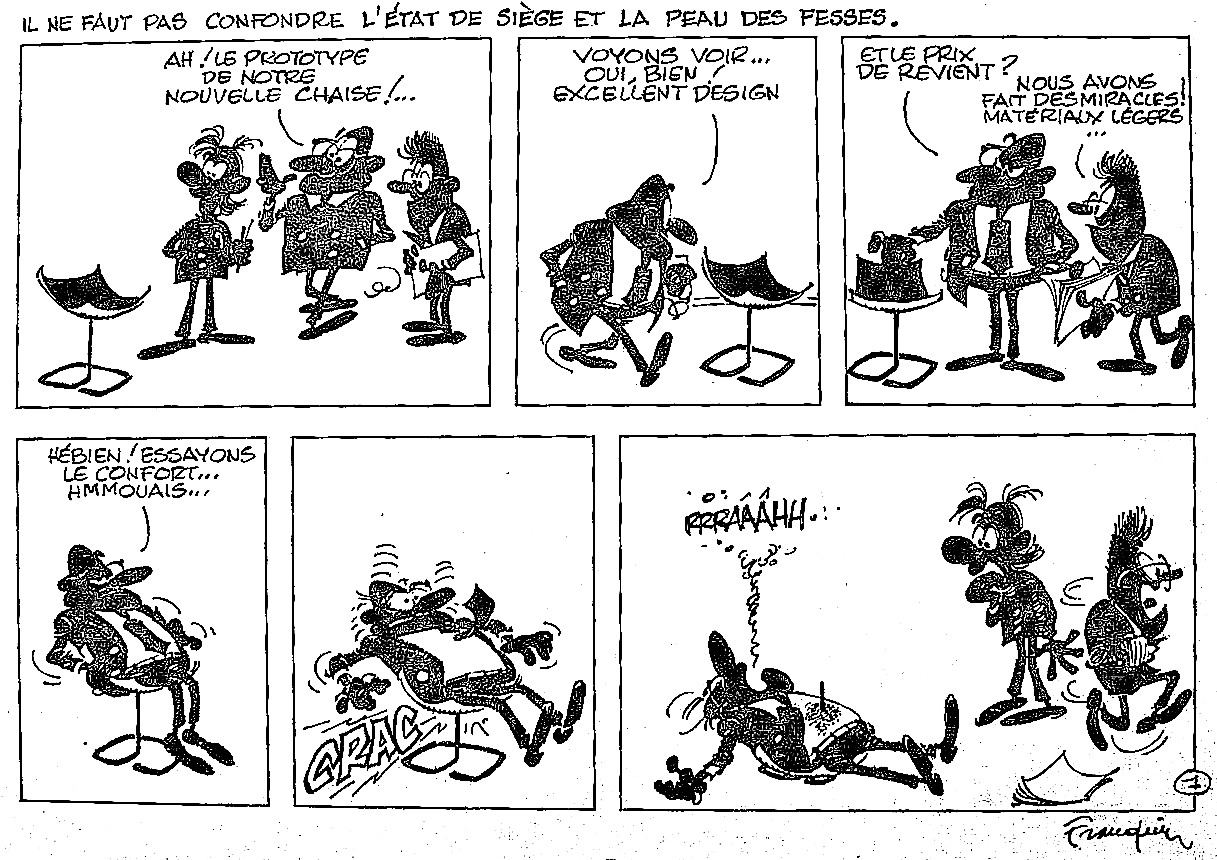