The bizarre cartoon mascot that killed a fast food chain

The manosphere should adopt him as its mascot.

When Rax came to Wisconsin in the 1980s, I don’t recall them being particularly associated with roast beef (or this character), but I do remember them being really into their salad bar (which granted, was probably the best I’ve seen in a fast food restaurant).

As a 21st-century immigrant to the U.S., I had never heard of Rax, a fast-food chain (with similar offerings to Arbys) that had more than 500 restaurants in the 1980s. It has eight now. Even so, I …

In 1992 the Rax fast-food franchise launched an advertising campaign featuring a creepy character by the name of Mr. Delicious (aka Mr. D). Imagine a repressed, perverted version of the Jack-in-the…

Not quite a re-boing, but related:

In 1992 the Rax fast-food franchise launched an advertising campaign featuring a creepy character by the name of Mr. Delicious (aka Mr. D). Imagine a repressed, perverted version of the Jack-in-the…

Great commercials anyway, not sure why people find it off-putting.

As a 21st-century immigrant to the U.S., I had never heard of Rax, a fast-food chain (with similar offerings to Arbys) that had more than 500 restaurants in the 1980s. It has eight now. Even so, I …

And I thought this guy was creepy. 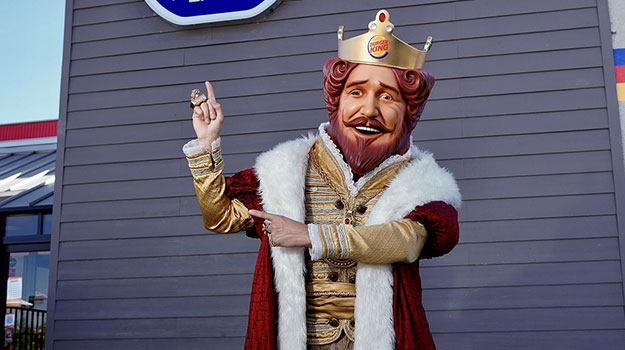 Weird ads aside, the food at Rax was actually pretty darn good.

but I do remember them being really into their salad bar

That seems odd; as I would imagine, that the Salad Bar was the worst profit/square foot of fast food items.

Surprisingly, Deutsch NY agency does not mention their ground-breaking Rax campaign on their site.

Could you eat there?

There was a Rax where I grew up. It was considered “upper tier” for fast food. I loved the waffle fries! Sad that it was run by idiots, but that seems like a small issue these days.

Per this article via the Wikipedia article on Rax, they were already in trouble when they started this particular ad campaign. They’d made a number of bad decisions (including the salad bar!) and Mr. Delicious was just one more straw added to the camel’s back.

Although clearly a really heavy straw.

I have to admit that when I lived in Ohio in the mid-eighties I rarely went to Rax. The salad bar was actually good, but you can’t eat it in the car, and sadly that’s where I ate the vast majority of fast food.

I love that he is wearing Stan’s jacket from Secret of Monkey Island! I now have to see if there is any evidence that Mr. D was an inspiration for the artists there!

And that’s why you should eat Arby’s. Because Arby’s doesn’t need a creepy mascot to tell you they don’t give a f*ck about you and we’re all gonna die eventually after living meaningless lives on this rock that we still managed to ruin.

“We have the meats”

And you have little self control along with a cholesterol-compromised heart. Come and make yourself happy while you still can.

I was also a Rax regular in Indiana. Those fries!

Never even heard of that fast food chain. Then again, we don´t even have Wendys in Germany.

Rax was pretty good, relatively speaking, but they were located in the worst out-of-the-way locations. The one closest to our house was on a useless frontage road down by the river, somewhere between the adult novelties store, tattoo parlor, and the (bad) lumber yard. So we had to decide in advance to go to Rax; we didn’t just drop in because they were on the way to Target.

I don’t remember Mr. D at all, nor do I remember “You can eat here.” I only recall “I’d rather Rax” (and that’s only because of a joke a friend once made.) While he’s likely among the worst advertising ideas ever, I wouldn’t blame Mr. D for their failure.

I wonder if *salad-lovers have ever saved any restaurant.