Back, very many years ago, when I was only a few years old, I remember finding a broken toy thing that was a little plastic shooting gallery thing.

The attached gun must’ve had a magnet in it. You would attract and drag a metal ball up to where the clear plastic viewing screen was, then somehow launch the ball at targets.

Besides the clear plastic screen and the magnetic gun, all my memory seems to document was a broken hole in it.

Does anyone else remember such a thing? 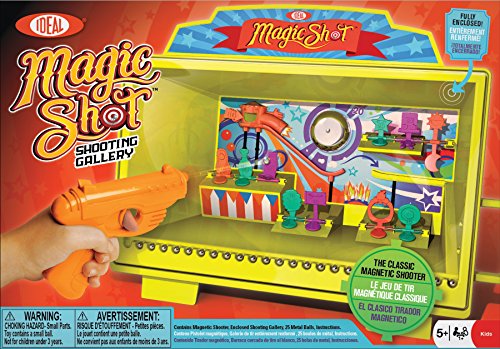 Ideal Magic Shot Magnetic Shooting Gallery has a safely enclosed "arcade" to challenge your shooting skills. Load your magnetic gun by sliding it over the pellets, then press the muzzle of the pistol ...

Holy shit, that was fast! I think that may have been it, but my memory leans towards it having been maybe white? Though we’re talking about a memory more than thirty years old, so maybe it was yellow.

Though we’re talking about a memory more than thirty years old, so maybe it was yellow.

You’ll feel silly when I say that I just googled “magnetic shooting gallery” and an entire page of these popped up, I didn’t put any real work into it.

I will say that I am still confused as to how it works through the plastic though.

I tried that years ago and it, of course, didn’t return anything. Should’ve tried again.

Oh, here we go, it must’ve been this version:

I probably even had hair a bit like that at the time too. I remember not liking having it cut.

I want to see that commercial remade with really creepy music and a menacing voice reading the same script. Like Salad Fingers, maybe.

I once spent my $10 Christmas gift on a toy spaceship that could extend a gantry and lower a spacesuited astronaut to the ground. The excitement faded to disappointment about an hour after exhausting its repertoire, so I disassembled the thing for parts and played with the motors.

Sorry, THIS is the coolest tin toy from the 60’s. I know because it was my Christmas prezzie in 1960.

My dad looks very pleased that he succeeded in assembling it.

We already have a thread on what the coolest toy is. And while this is a cool toy, it isn’t the coolest.

This is my Boba Fett. There are many like it, but this one is mine. I have a nicer conditioned one somewhere, but all the paint missing was loving rubbed off or ingested during play. ETA - if you don’t have a pic of YOUR toy, post one of it from the net somewhere. [image]

Now that’s how you do playing right.

This is brilliant. I’m getting laser cutter ideas now.

the foot-high model was big and the jet pack fired a rocket. much cooler.

surprised you passed it over in favor of the standard size, Mister44.

anyway, ten bucks sez the narrator of the HHHH ad was the same voice actor as Mr Jinx from the Hanna Barbera cartoons.

Also have the new re-released versions with the rocket - but it is mint on card. Need to find another one open to display.

Also have a prototype knock off from China. Not real - but neat.

I only ever saw one, this was in kindergarten. Brandon fired the rocket, which had a string attached, while under a tree canopy and it stuck. Had to leave Fett hanging when recess was over.

You got the Pez dispenser? I had the Django one, too, but my dog ate it

It was actively advertised when I was a young kid. Maybe 65-68 time frame?

No one in the neighborhood got one, so it was a mystery item to me . . .until many years later, when one turned up at a rummage sale up the street. It still worked. I wasn’t super impressed, though.