The Guardian digs into the dangers of working for Amazon

Not to worry, in the next decade Amazon will have “disrupted” away the problem of workplace injuries for employees. No human employee, no problem!

A couple of recent news items: 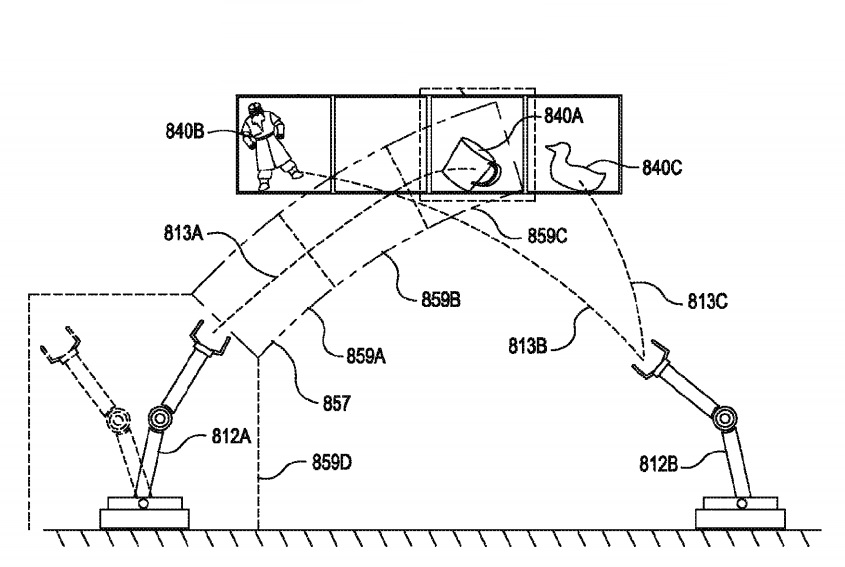 Heads up! Amazon wins a patent for robotic arms that toss warehouse items

Robots are nothing new for Amazon’s fulfillment centers, but a newly issued Amazon patent envisions robots that could toss items around those centers.

To be clear, I’m not a Luddite. I’m all for automating away dangerous, back-breaking, mind-numbing, and spirit-destroying work. I am concerned about what plans, if any, TPTB in late-stage capitalist America have in store for all the people who’ll be put out of work.

If only the CEO of the company had enough money to fix some of these issues?

Maybe when he has $250B he’ll be able to afford to pay his workers better and address the unsafe working conditions in his facilities.

Amazon would only hand [$] over to her is if Allen agreed to sign off on a contract which stated that she wouldn’t bad mouth the company.

It’s called “Hold Harmless” in legal parlance. I had to sign one with Perot Systems in 1993. Nuff sed.

Well, it’s pretty clear that Amazon the tech company and Amazon the logistics company work very, very differently when it comes to hiring practices/etc. Nobody’s looking at a warehouse worker and looking to raise the bar.

One thing that is different is that day-to-day folks didn’t rely on 'ol Ross to the point where they HAD to patronize his business.

I’d have a difficult time getting by without Amazon, and it makes me kind sick every time I think about it.

Well, it’s pretty clear that Amazon the tech company and Amazon the logistics company work very, very differently when it comes to hiring practices/etc. Nobody’s looking at a warehouse worker and looking to raise the bar.

My now ex-wife worked at a dental clinic among the Amazon tech buildings for 6+ years. A huge percentage of the patients there were Amazon tech workers. She watched them come from other countries, bright and enthusiastic, fresh from masters or PH.d programs. She watched the enthusiasm drain away. She watched them rapidly enter a state of permanent stress and anxiety. She lost count of the number of people that would just break down crying if their appointment was delayed 5 minutes for fear it would end their career. None of the Amazon folks stayed longer than 2 years. The whole office got really good at knowing when an Amazon person was in the final stages and would push the cosmetics dentistry hard to help with the soon the be job interviews.

The only people that didn’t fit this pattern were the executives. They loved their jobs, never seemed stressed and stayed much longer than 2 years. (No big surprise)

At this point in time I had worked at MS for many years. So she had some sense of how often I was happy at work and how often I was stressed. Which was something like (90% happy / 10% stressed) for me and co-workers she met. She said the difference was night and day. While MS pumped the regular employees up (maybe too much), Amazon just permanently whipped everyone and kept them in a permanent state of fear of not being good enough.

And from what I have read and from a few creative friends that took part-time jobs in the fulfillment center it just gets worse the lower you are on the ladder.

She ended up on worker’s compensation.

The only people that didn’t fit this pattern were the executives. They loved their jobs, never seemed stressed and stayed much longer than 2 years. (No big surprise)

I’ve heard that it’s a different kind of meatgrinder for the executives at the HQ, too. Sounds like an unpleasant and high-stress place to work from the executive suite all the way to the warehouse floor.

Inside Amazon: Wrestling Big Ideas in a Bruising Workplace

The company is conducting an experiment in how far it can push white-collar workers to get them to achieve its ever-expanding ambitions.

Yes! My dentist and hygienist noticed my Perot PTSD first - I got a night guard and haven’t shattered any fillings or crowns ever since.

Oh wow. I hadn’t heard about that.

Yes! My dentist and hygienist noticed my Perot PTSD first - I got a night guard and haven’t shattered any fillings or crowns ever since.

My understanding is that the Amazon folks get in addition to the typical dental benefit, an extra sum of money just to cover a night guard since so many were shattering their teeth.

When it comes to monetizing their blog, hypocrisy is Boing Boing’s middle name. This has been the case for close to two decades now.

Part the second: Raising the bar. Yes you want someone who will be a contributor, not a drain. By the same token, if you keep raising the bar, eventually you will be out of employees able to leap unrealistic expectations; it’s a point of diminishing returns, unless you completely remodel how you do things. That might be a plus in management’s eyes; they can fire the workers who can’t keep up with your perpetual changes and hire a whole new crop of people more cheaply.

There is no plan. That’s the plan. Always has been.

Of course, Bezos, the guy writing this, assumes he is a superstar and furthermore, believes he can tell who else is or will be one.

I remember hearing something about removing the lowest 25% in a business every year. Bush II wanted to put something like that in place for gummint. But after 10 years what do you have? 0.7510 = 0.056. So after ten years you have only 5.6% of the original people or business entity???

I remember hearing something about removing the lowest 25% in a business every year.

This is the concept you’re probably thinking of:

A vitality curve is a performance management practice that calls for individuals to be ranked or rated against their coworkers. It is also called stack ranking, forced ranking, and rank and yank. Pioneered by GE's Jack Welch in the 1980s, it has long been a controversial practice due to its negative effects on employee morale and potential for bias and discrimination. Many companies have abandoned the system in recent years, including GE, Microsoft, and Goldman Sachs. As organizational behavior e...

Nobody’s looking at a warehouse worker and looking to raise the bar.

Sounds like in her case they flat out removed the bar!