The high cost of being poor

“The reason that the rich were so rich, Vimes reasoned, was because they managed to spend less money.

Take boots, for example. He earned thirty-eight dollars a month plus
allowances. A really good pair of leather boots cost fifty dollars. But
an affordable pair of boots, which were sort of OK for a season or two
and then leaked like hell when the cardboard gave out, cost about ten
dollars. Those were the kind of boots Vimes always bought, and wore
until the soles were so thin that he could tell where he was in
Ankh-Morpork on a foggy night by the feel of the cobbles.

But the thing was that good boots lasted for years and years. A man who could
afford fifty dollars had a pair of boots that’d still be keeping his
feet dry in ten years’ time, while the poor man who could only afford
cheap boots would have spent a hundred dollars on boots in the same time
and would still have wet feet.

This was the Captain Samuel Vimes ‘Boots’ theory of socioeconomic unfairness.”

Beat me to it

Once it was because I got a week’s unpaid leave when the company wanted to cut payroll for the rest of the month.

Well it is better than the alternative of the company just closing and moving to a cheaper country.

That’s the ONLY alternative, huh?

There is so much “WTF?” about American working poverty, especially when viewed by non-Americans. But don’t worry. All those of us who’ve lived with semi-functioning welfare safety nets for the last half a century, and therefor look upon American poverty with entitled bafflement, can look forward to a future of true American-style WTF as our governments work to dismantle those safety nets just as fast as they can. It’s already working a treat in “our working poor are now dependant on food banks” UK, and if Australia can finish dismantling Medicare as fast as it’d like to, sickness will be a fast track to debt & homelessness there in no time. The WTF awaits us all.

This graphic found on Tumblr is really striking for how it calls attention to an accurate, acute, very fundamental consequence of “Winner Takes All”, & poignantly frames it with a pretty unique perspective. 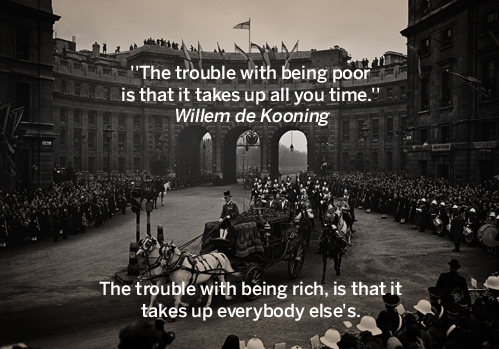 And then there’s this unattributed quote that addresses quite graphically the misshapen psychic core that incessantly burns within acolytes of Ayn Rand, or any who are given over to similar ideological vagaries:

“There are two novels that can change a bookish fourteen-year old’s life: The Lord of the Rings and Atlas Shrugged. One is a childish fantasy that often engenders a lifelong obsession with its unbelievable heroes, leading to an emotionally stunted, socially crippled adulthood, unable to deal with the real world. The other, of course, involves orcs.”

I don’t know if that final paragraph is meant as irony, but it’s not very practical advice. Sam’s Club has stores everywhere, except the ghetto. It doesn’t make much sense there - would you buy a two years’ supply of canned tomatoes if you live in a small apartment with no storage?

As always, America forges ahead, the English-speaking world is quick to follow, and we in the rest of the world try to catch up as soon as we’re ready.

would you buy a two years’ supply of canned tomatoes if you live in a small apartment with no storage?

Would pooling resources work? Get enough people together for a group buy?

In reality? Or a hypothesis? Real poor people don’t do it for a number of reasons; one is transportation. Even if you have a membership card, even if you can convince your neighbors to pony up cash, even if you can all agree what to buy, you then have to take the bus way out to the suburbs, buy heavy stuff, and bring it home on the bus. It’s a lot of work to save five bucks, and you’re already working long hours.

The longer article on Salon then goes on to say just how unrealistic that is. To save money, you need a larger amount of money up front.

How many people would be too many for this to work?

My experiences from 10 years ago suggest that I would need to find at least 50 other people in the same situation, and probably more. I was walking to Tesco every day and buying the value bread that was nearly out of date, because 5p loaves of bread meant I would have at least something to eat. If I was lucky, I could go the the Birkett’s surplus stock shop and get slightly misshapen but better bread and cakes that would last a bit longer for 10-15p or seven meat pies for a pound (but I was vegetarian at the time so I didn’t do this). I think that shop closed though because Birkett’s had been bought by Greggs a few years earlier.

I later worked out that I has been ‘surviving’ on about 500Kcal a day for about six months. I had completely fucked up my physical health in the process.

It’s not that it wouldn’t work. It’s not the solution. Again if you read the Salon article, it talks about how grocery stores are not in American ghetto, just higher priced convenience stores. So now you have to find someone with a car. You have to find 50 people with extra cash at the same time. You need someone that is very trustworthy- because cash from 50 other people would be a huge temptation. And if that person is stopped in what would be like a crappy car with huge wads of cash, chances are the police will confiscate it-- and you just made 49 other people go hungry.

What I like about the Salon article is it does drive home that we tend to look at the problems of the poor through the lens of our economic situation. Well, if they only did that. Well, why don’t they do this. But there are entire industries that exist because of people living on the margins.

My ex was a finance person. One time he worked for a company - a large operation - in a rural part of NC. A lot of the people who worked in his department were women, mostly single moms who didn’t have a lot of work options in this small town.

At one point the budget was cut for his team and either one of the single moms had to lose her job or the whole team had to take pay cuts.

Meantime, the president of the company is driving a BMW and there was some kind of situation with a special corporation comprised of the executives that they were funneling money into - this was not part of the budget my ex controlled so he put blinders on in order to keep his job.

Really the ethics in corporate America is terrifying.

I also think when you are poor that you are so at risk; there are so many opportunities you will not take.

I was lucky enough to go to a great college at a time when my parents were very very very poor. I had a more than full scholarship which also paid some of my boarding. I left one of the most expensive colleges in the US with just a few thousand in debt.

One of the great things about the school was the study abroad program. I’d studied French to the required level, shy of just two credits which I could have gotten if I’d needed them, but I never applied for the program. If something went wrong, my parents didn’t even have the money to buy me typing paper, much less fly me home, or handle a hospital bill, or fly overseas. I knew in my heart that there was no cushion for me and that this was a much greater risk for me than the kids whose parents could afford at least to buy them clothes.

I knew I had no backup from my parents and envied all the kids, rich and middle class, who did have it and took it for granted. It took me many years of making money before I came to be able to feel like I had the resources to care for myself, and to trust other people to help me in other ways, too, as I always had the feeling that I was on my own. Every day I feel like I am rich because I have the ability to handle little emergencies that used to be so painful, and I can be generous now because I don’t feel so scared.

In reality? Or a hypothesis?

Also, some possible strategies/solutions/resources available may be inferred from “Sudhir Alladi Venkatesh - Off the Books - The Underground Economy of the Urban Poor (Harvard 2006)”. (Todo: actually read it.)

It’s not that it wouldn’t work. It’s not the solution

I know. Maybe its the angry anarchist in me, but I can’t see reformism helping us out of this. I wasn’t mentioning solutions in my comment because I look at the situation and I can only see revolution working at this point, and that isn’t going to end well even if it is a success. The situation is bad in the UK and I know it is worse in the US, but the workers still have more to lose than their chains.

Both my husband and I are in the same boat. We both went to college (fucking loans, man), and came from very dismal poverty ridden backgrounds. We simply could not take advantage of opportunities because there was literally not enough money to do it. We bought our groceries every three months, because that’s when we got our student loans. If we were lucky, we had an extra $100 three to four times a year. Hell, I couldn’t even afford the money to pay for my own graduation. Walking was not an option.

My fellow students could not understand this at all. They had parents who could help.

The degrees were worth it. Even in deep student loan debt, we make more now than we’d ever make otherwise. This allows us to be a safety net for his parents, who are both disabled and on services. If it wasn’t for us, their food stamps would not be enough at $135/month for two.