The origin of that familiar "font" used in comic book lettering

Marvel was great at crediting the folks who did their lettering, but Charlton went one step beyond. Their text boxes were typeset and the credit would read “Lettered by A. Machine.”

Reminds me of Big Black and their drummer “Roland”.

Fun fact - I used one of Comic Craft fonts for freelance identity.

I am glad to hear that an established letterer started that company.

In an interview Dick Giordano described the Charlton lettering machine as a kind of oversized typewriter. The original art pages (very large; these were the days of twice-up artwork) were rolled into the machine and the operator typed dialogue in the appropriate places. Giordano mentioned always being annoyed at the machine’s awkward spacing of the letter “I.”

When it comes to human comics letterers I have always admired (along with Simek and Rosen) DC’s Gaspar Saladino and Ben Oda and his lettering family, who worked everywhere.

Yeah makes their stuff an automatic pass AFAIC, yeah you might have Ditko but I just don’t need to assault my eyes with the lettering.

Letterers are like movie soundtracks. The really good ones you don’t really notice unless there is a dramatic event. The bad ones distract from the media.

I don’t know about that. But I’ll give feeling the power of a Thunder God a whirl.

Coincidentally, I just got a copy of an old Batman comic (1976) from Mexico (with a Shadow story), and it was type set, vs hand lettered in Spanish. Looks horrible.

What the fuck? Chris Eliopoulos spent ten years with Marvel working out a custom font and still does a ton of hand lettering for various books and Todd Klein has done the same with DC.

This week's 'Ask Chris' topic is lettering, as Sims examines the under appreciated skill of comic book lettering, and shares who he thinks does it best and why. 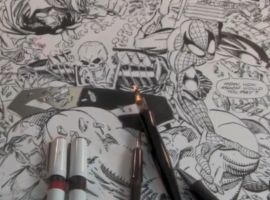 Font for dialogue, why not, but made-with-computer speech bubbles and sound effect are just ugly.

When I took mechanical drawing back in the 1960s we were taught that when a human produced letters on a piece of paper it was called “lettering”. If a machine did it, then it was “printing”. We were told never to use the word “print” when we meant the word “letter”. This would be an expensive mistake in the days before personal computers and printers.

There was a metal lettering stencil for producing consistent looking lettering. I wonder how much modern comic book fonts are based on this old metal gadget. I’m sure a lot of artists were at least familiar with it.

P.S. Does anyone else remember those dry cleaning bags that seemed to be full of eraser rubber? You’d use them neaten up your work, especially if you had smudges or uneven erasures.

(Those stencils are still available at Utrecht -
http://www.utrechtart.com/Chartpak-Pickett-Lettering-Guide--26Vi--Modern-Bold-Letters--Numbers-in-3-sizes-MP-28970-001-i1015278.utrecht).

(Those dry cleaning bags are also available at - https://www.amazon.com/dp/B004O4I3EI/ref=wl_it_dp_o_pC_S_ttl?_encoding=UTF8&colid=3OJ25L26IR6AS&coliid=I1RHINVPOP7LIW).

I remember those, they were still done like that at least until the late 80’s
I guess it was a way to keep the cost of the translations down since those were the few comic books that didn’t have hand drawn lettering.

Great video. As a kid, reading 12 cent comics, I noticed that every single line of dialog ended with an exclamation point! Made sense two ways - comics are operatic and every statement may well be emphatic, but also periods might vanish with the lousy printing. Exclamation points just use more ink and so are more likely to be legible.

About terminal exclamation marks used to hedge against vanishing periods–I’ve heard that story so many times that I wonder if it’s apocryphal. I’ve seen a number early comics using periods at the end of sentences and the dots didn’t disappear. It could be true, though.

I have a vague memory of a brief time, (maybe in the 80s?) when Marvel tried dropping the final punctuation of the last sentence in a balloon. Does anyone remember this? All the final sentences ended like this

I never could figure out what hey were thinking.

I wonder how closely this is related to hand lettering in drafting. I remember using the Ames lettering guide in drafting class.