The pleasures and sorrows of micro-apartment living

Its land, isn’t it? Surrounded by open park land. Very quiet at night. Often well equipped with public toilets and cafe’s. A bit of engineering work and you have a small home which will fit into a volume of 2000 by 2000 by 1000 mm.

Ah. Bit lacking in community though …

Some people would be willing to pay extra for such quiet neighbors.

I think that room renting also used to be more common.

I have not seen any reliable evidence, but movies from the 40’s certainly give me the impression that a lot more older couples in big houses were renting out rooms back then than today.

Urgh. Did that for 3 years after graduating. That was enough for me.

For one year we had a decent bunch of people, then the landlord rented rooms to some dreadful tenants (i.e. thieves) and everyone nice ran away.

Anyone ever read this? 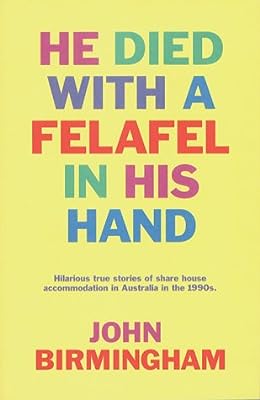 He Died With a Felafel in His Hand

These hilarious tales of urban terror reveal the dark truth hidden behind three seemingly innocent words—a phrase that you have seen a hundred times before but will never view in the same light again— ...

I’m way too much of an introvert. The mere mention of “communal space” gives me the internal sweats. My first apartment was 400 sq feet and I dreaded the weekly trips to the laundry room.
And there were a few times when I really didn’t enjoy sharing a bedroom wall with the neighbors.

This is the deck plan of my first home after leaving school - most of the beds were bunks, so we had 25 people living in the area shown (the crossed out areas were holds for storage). It helped that we had weekly inspections and had to limit our belongings, but the only privacy you got was when you closed the curtain to your bunk. At one point one of my cabinmates stopped taking his meds and went from quiet and introverted to convinced he was Jesus with a mission to kill another of our cabinmates (seriously), which made life interesting for the couple of days until his father came to take him home.

Very true. I have happily lived in a 400 square foot apartment for a decade. But as I get older I want to be able to entertain more at home, make more things, collect art - and none of these things are possible in my current space.

However, my mother who is 75 is happy to downsize - so I think that the space “needed” varies very much with your current interests, goals, and social life.

I will never understand people who think they “need” 5,000 square feet for a couple and one or two small kids - but to each their own.

Honestly sharing a bedroom wall is the worst. Along with windows from different dwellings pointing straight at each other.