The RPG and Wargame Supply Sourcebook

This is less a “sourcebook” than a magazine full of ads, either 1/2 page or full-page.

But, they are the coolest ads ever.

So imagine a 164-pg magazine almost 100% ads, all of which are relevant to your interests and aesthetically pleasing, many in a retro-80s style. I used to love the ads in many RPG and computer gaming magazines, and these have the same look.

It’s like the Whole Earth Catalog but for RPGs and Wargames.

In our dreams this is what the BoingBoingStore looks like

As mentioned the other day…

Speaking of RPGs, I’m considering restarting my online Banestorm game. Anyone interested in playing? No rules knowledge required, but you do need to be willing to reply to posts within a day or so.

…I’m hoping to restart my BBS Banestorm game. I’ve got two players so far, but ideally I’d like at least one or two more.

For anyone unfamiliar with Banestorm…

Most of the world is late-medieval; small parts are early-Renaissance, other bits are Bronze age to Stone age. No electronics, no steam engines, no gunpowder, minimal clockwork. There are parts of the world in which magic supplants technology to a significant degree, however.

To give an idea of the cultural background:

The magical catastrophe known as the Banestorm brought countless amounts of people and creatures to Yrth, including humans from Medieval Earth. And as humans tend to do, they soon expanded to take over most of the continent of Ytarria, displacing the native elves and orcs (the dwarves remained safe in their mountain fortresses). One thousand years later, Ytarria is dominated by the East-Coast Empire of Megalos (Catholic, powerful, sorcerous, old and corrupt), surrounded by various nations on all other sides. A significant minority of the Megalan population are goblins, of the green-skinned small-but-clever trickster variety.

South of Megalos lies the independent country of Cardiel (probably the most cosmopolitan society of Ytarria; as well as a nearly 50/50 Catholic/Muslim population, they also have small groups of centaurs and halflings and are one of the only places in Ytarria with openly Huguenot communities). Cardiel was formerly a Megalan province, and before that it was the mixed Islamic nation of al-Kard. West of Cardiel are the Sunnis of al-Wazif (ruled by a Caliph, and tolerant of magic: think Arabian Nights) and the Shiites of al-Haz (the nation guarding the Holy City of Geb-al-Din, controlled by the clergy, and intolerant of magic: think Saudi Arabia). 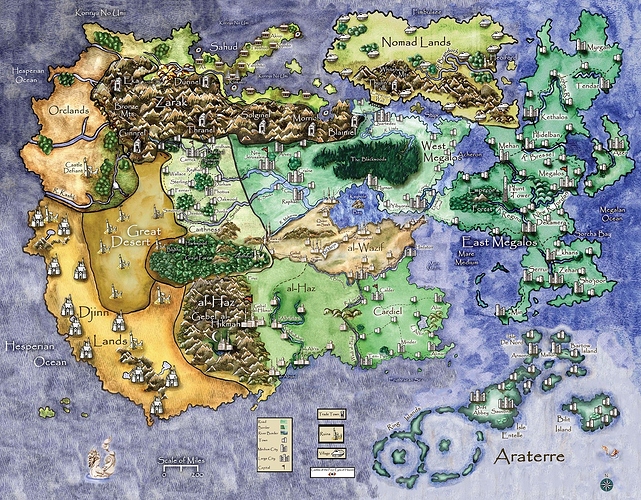 Technology in Megalos and the Islamic nations is medieval, while the semi-autonomous Megalan archipelago of Araterre in the far South is slightly more advanced (swashbucklers and foppish nobles duelling with fencing weapons, but still no gunpowder). Nearby is Bilit Island; Aztec society crossed with a Sinbad ecosystem. The Nomad Lands to the North of Megalos (Celt/Viking/Mongol: “barbarians” of all sorts) are closer to a Late Iron Age tech level.

West of Megalos is another ex-province, now the country of Caithness, where an unusual local interference with magic defends it against Megalan reconquest (and provides for a more Arthurian ambience than the magically-saturated Megalan culture). South of Caithness is the elf-infested Great Forest, while the mountains to the North hold the dwarf nation of Zarak. Further West the lizardmen of the Great Desert provide a buffer against the tribes of the Orclands on the west coast.

The nations of Ytarria are mostly at peace, but the last Megalan crusade was less than two decades ago, and a civil war has wracked Caithness for years.

Races available are humans (from assorted cultures and religions, ranging from stone age to early Renaissance), elves/dwarves/halflings (all fairly Tolkeinesque; elves are aloof and innately magical, dwarves are miners and tough fighters, halflings are good sneaks), goblins (similar to humans, but a bit smaller, trickier and more prone to magic), gnomes (kind of above-ground dwarves, not as militaristic), orcs (barbarian tribal sorts, killed on sight in most human lands), ogres (bigger dumber orcs, occasionally used as slave-soldiers in human armies) and reptile men (big and tough but also mostly seen as kill-on-sight monsters).

On that description: SOLD!