Oxford colleges are under pressure from alumni to accept any offers without condition (Worcester College already has).

It should be taken into account that this benefits the working classes who were given conditional offers to Oxbridge more than it does the ruling classes. The ruling classes already had the odds stacked in their favour and the predicted results made that worse.

Hopefully universities, affected by a lack of foreign students, will actively seek those who have lost out due to the incompetence.

I think the advice is for every student to go into clearing, although that is little comfort for people who were given poor grades (or worse, a U) just because their school had someone get that grade in a previous year.

Taking the SAT is an American rite of passage. Along with the increasingly popular ACT, the SAT is critical in identifying student readiness for college and as an important gateway to higher educat…

The mean score on the math section of the SAT for all test-takers is 511 out of 800, the average scores for blacks (428) and Latinos (457) are significantly below those of whites (534) and Asians (598). The scores of black and Latino students are clustered towards the bottom of the distribution, while white scores are relatively normally distributed, and Asians are clustered at the top: 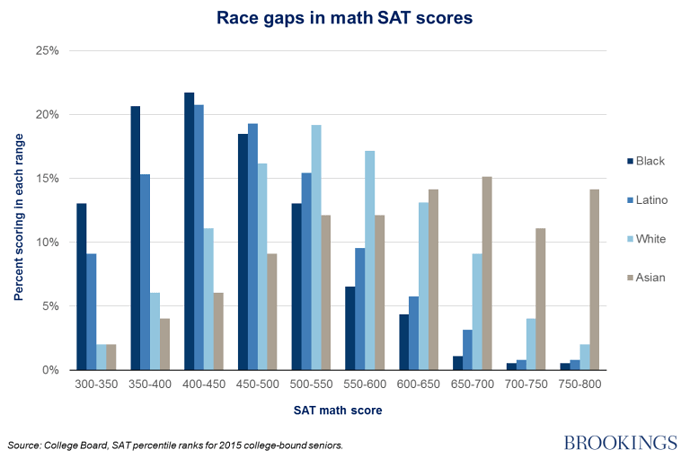 Just because maths are ostensibly “universal” in a broader sense doesn’t mean that diminished educational opportunities can’t be a further gating factor to high SAT scores (and in turn reducing certain opportunities).

I feel like some of you are singling me out for points that I’m not actually making.

I thought it an interesting paper with some interesting references attached. There’s a seductive idea of maths as a value free structure that can appeal to humans and aliens alike. But that’s often not how it works in practice. Unfortunately, it can amplify existing cultural biases.

Cathy O Neil wrote on the subject a bit.

The other potentially more troubling possibility is that the culture of recreational mathematics (which can encourage people to become mathematicians) might encode certain norms that appeal to white people and don’t appeal to racial minorities.

I remember when the Black Panthers used the SATs to try to desegregate a San Francisco college.

the culture of recreational mathematics

I don’t think I know what this means.

Menseki meiro means “area mazes.” It’s a new puzzle genre that challenges you to derive the length or area of rectangles based on the given dimensions of neighboring rectangles. I…

I know what “recreational mathematics” usually means, though I don’t myself differentiate it from “mathematics”. I didn’t know what the full phrase I quoted means.

The canonical recreational mathematician was Martin Gardner. Writing about numbers for a non professional audience eager for riddles, puzzles and games.

Here’s one of his problems:

The Three Prisoners problem appeared in Martin Gardner's "Mathematical Games" column in Scientific American in 1959. It is mathematically equivalent to the Monty Hall problem with car and goat replaced with freedom and execution, respectively. Three prisoners, A, B, and C, are in separate cells and sentenced to death. The governor has selected one of them at random to be pardoned. The warden knows which one is pardoned, but is not allowed to tell. Prisoner A begs the warden to let him know the i...

A fun logic problem, if prison is only a theoretical possibility. But what if you know someone who’s doing time?

Can you prove there is a quantifiable reality out there?

If so, there are any number of philosophy prizes/chairs and lots of money waiting for you - if you can survive the attentions of the Amalgamated Union of Philosophers, Sages, Luminaries and Other Thinking Persons. 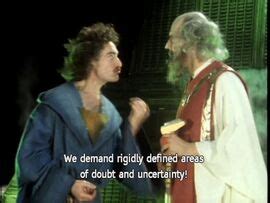 More seriously, there are of course all sorts of reasons why one should challenge the idea that there is a quantifiable reality. We have no way of knowing whether mathematics and physics is modelling any actual reality. At least in part because we can’t even agree what ‘reality’ means.

Two: who says the SAT proves equality is good?

This is definitely not what I was suggesting.

All I meant was that: if you start a project to analyze data, with the specific, slanted intention of proving something, and then you fail to prove that something, you should probably throw the whole thing out because it’s fundamentally flawed by that original bias.

you should probably throw the whole thing out because it’s fundamentally flawed by that original bias. 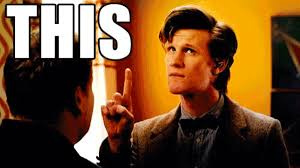 It may have problems, but neither should someone’s ability to drudge their way through high school and check the right boxes be the sole determinate of their educational opportunties. I was a mediocre high school student and I pegged the standardized scores – then did very well in university and on through to law school. In a German vocational-track model, I’ve have been a highly competent air traffic controller or something (which, hell, maybe would have been better, but I don’t think kids should get tracked that early).

Maybe we should… I don’t know, not make education a drudge?

Why should a test that was LITERALLY created by a white supremacist be our metric for getting into college.

I sucked at both. Does that mean I should be marked as lesser than for my entire life? We should stop throwing people away for not doing well at school or on standardized tests…

THEY didn’t fail to live up to an arbitrary BS, the system has failed them. That’s it.

I think more ways to show what you can do, rather than fewer, is the way to do things. I’d rather have high school grades and SATs, than high school grades alone. If you can think of other sort of universal measures to give schools a sense of what they’re capable of doing, I’d be for third or fourth or fifth metrics, too.

More seriously, there are of course all sorts of reasons why one should challenge the idea that there is a quantifiable reality. We have no way of knowing whether mathematics and physics is modelling any actual reality. At least in part because we can’t even agree what ‘reality’ means.

By that argument, do you assert that Kellyanne Conway was perfectly honest and above-board when she asserted that Trump’s inauguration crowd was the largest in history, and that Sean Spicer’s statements to that effect were simply based on “alternative facts?” Counting the attendees is, after all, mathematics.

If you do actually believe that argument, perhaps you should step off the cornice of a tall building while declaring that physics is imaginary and that the theory of universal gravitation is just a theory.