The jokes write themselves in KKKpublican land.

“Building America’s Trust” is as fine an example of Orwellian doublespeak as I’ve seen this week. Senator Cornyn’s contempt for us rings out loud and clear here.

Not that I need one right now, but if this bill passes it will be another excellent reason not to visit the US again until the Oранжевый Царуша (Little Orange Czar) is out of office.

It would aggressively deploy drones at the ‘border,’ but [it] doesn’t mention that DHS interprets its authority to operate at the ‘border’ to extend to any area within 100 miles of the actual legal border.

I assume that means 100 miles on the US side. I’m 65 miles on the other side. I don’t have a gun, but I bet that with some practice I could take out a DHS drone with a liquid nitrogen bottle rocket.

Who needs privacy? The holy founding fathers didn’t, so you too don’t need privacy. Rejoice, you have free speech and guns. No need for any further rights.

but [it] doesn’t mention that DHS interprets its authority to operate at the ‘border’ to extend to any area within 100 miles of the actual legal border.

CBP already does this, and considers the shoreline of the great lakes to be the US border.

So it makes sense that the DHS would want in on it.

That map is crazy, btw. The entire state of Michigan, and covering close to 35 million people in northern IL–it easily stretches to fucking Mendota, IL (which by any interpretation is wayyyyy out in the cornfields).

So what bullshitery allows them to keep the text of a bill secret? How is that even expected to work? Wouldn’t anyone in Congress that opposes it just go ahead and make it public (without even having to technically leak it)? Or is there some legal mechanism that supposedly prevents that and keeps the bill secret until what, the day of the vote? The day it gets signed into law? Never?

In the vain of cui bono… Who is behind this? Who would benefit from this massive expansion domestic surveillance? It must be entities with money and thus power obviously, to buy the politicians sponsoring the bill. But who or what? Arguably it would have to be entities who believe that this kind of surveillance would benefit them economically and/or would not hurt them themselves. Can someone enlighten me?

Back up - I thought it was anywhere within 100 miles of any international airport? Like, every single person except one little corner of the Havasupai reservation.

Is there really a government law that disallows the Fourth Amendment for 200 million Americans? Some people say it’s true, but the reasoning behind a 100-mile “Constitution-free” zone argument is confusing at best.

That’s one way it can be interpreted. I’m not sure if anyone has tried to use 100 miles from an airport as legal justification yet.

This makes me so nervous. I forgot how close I am to a border, because I just see the lake, not a fence. Or a wall.

The ACLU’s map far from complete when you take into account international airports and “federal lands”.

This map is much more accurate.

Title of bill tends to be opposite of bill’s intent.

I want off of Orange Mango’s wild ride.

I knew the 100 miles was a thing (and I was NEVER ok with that)… but I had no idea my home state of Michigan was entirely in Occupied Territory. Same thing with the entirety of DC (and the 'bubs where I live) in that case. Holy hell.

Doesn’t this extend to international airports somehow too?

Dammit, I should have scrolled down. That’s more like I expected, but I’ve never seen it in map form.

Covered with an article earlier in the thread, Check it out. It also includes an exploration of the rights the government can exercise. 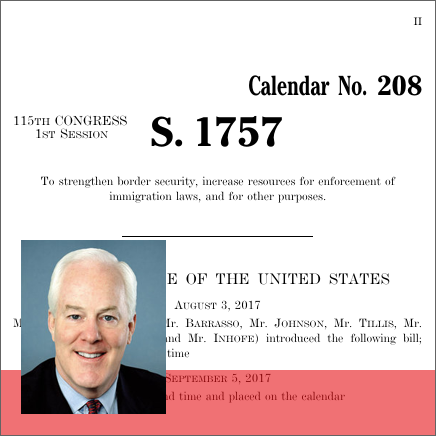 A bill to strengthen border security, increase resources for enforcement of immigration laws, and for other purposes.

SEC. 2009. OPERATION STONEGARDEN.
“(a) ESTABLISHMENT.—There is established in the Department a program, which shall be known as ‘Operation Stonegarden’, under which the Secretary, acting through the Administrator, shall make grants to eligible law enforcement agencies, through the State administrative agency, to enhance border security in accordance with this section.