The story of how cancelled sci-fi show UFO led to hit series Space: 1999

On that note, here’s an old blog article tracing the shift from UFO to Space 1999 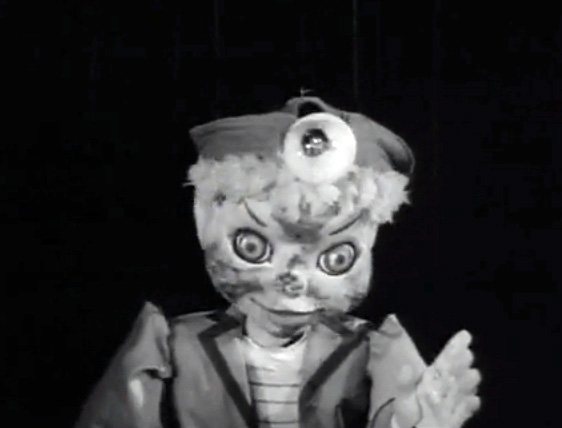 In the SHADO of the Moon

Space: 1999 began life as a different series, the delayed second season of creator Gerry Anderson’s occasionally popular UFO. Anderson, who began his career in film and television production as an …

Sadly on rewatch Space: 1999 has not aged well.

I found at a flea market an unopened DVD set of UFO, and cheerfully bought it a few years ago. It too, has not aged well.

Space: 1999 as a concept was great, the execution was… of its time. I wish someone would revisit it and really hammer home the cosmic angst & horror elements. A finite number of people trapped on the runaway Moon, every encounter with an alien baddie has them at a disadvantage and every single death of an Alphan has a real impact, as it dimishes their community. Keep the 70’s future aesthetic though, I love that (been piecing together a full cosplay outfit from stuff from the official Gerry Anderson store and lots of beige clothing).

I grew up watching both shows I’m not sure what year I watched UFO, I guess the year it was in syndication with CBS in NY, and always wanted to know more about the story and the aliens, so disappointed that it was only 1 season.

And then Space: 1999. I had no idea that they were related. An early reaction to the nuclear blast was, based on it being on the far side of the moon, is that it should have driven the moon into the earth. But perhaps I misremember. It has been a long time.

I watched the second season opener recently, when they scrapped a good number of the original characters, and and added new ones, mostly without any explanation (where did Victor go?), and it was truly dreadful.

Like many shows of my childhood it’s probably better to stick with the memories than to revisit the actual show. I can’t recall any episode of 1999 but there are a couple UFO episodes that are firmly planted in my brain.

I agree. The same error was made with Star Trek Voyager. Even having the command deck, slowly modified to have repairs made with was was available and slowly becoming like the Dr Who TARDIS deck could have been an interesting plot point.

And as a side effect the Italian dub had do be made with epsodes in the same order of the english version. Spazio 1999 - Episodi - Stagione I - RaiPlay

I have to add that having models and practical effect it’s way better than using CGI, and having black and white CRTs everywhere it’s actually cool, evien if at the time was a necessity.

This video answered a question I’ve had for a long time, which is why the Andersons kept creating new series rather than continuing with second seasons of existing series.
It seems that each new series was, in effect, “auditioning” for one of the big three US networks. When the networks rejected it, it made more financial sense to create a new series that might crack that market than reinvest in the existing one.
Interesting bit of data about the biz.

Series 1 still looks astounding with huge sets and some incredible model effects; the stories - whilst rarely good science fiction - have a certain grim elegance to them. And of course, it still has one of the scariest hours of television ever - ‘Dragon’s Domain’ - with all the tentacles…

Series 2 - yeah, we’ll - that sucked - but the Eagles were still cool.

I’m right now re-watching the pilot/first episode, and … it’s not terrible. Not as terrible as I expected. There’s some genuine suspense, and the acting (aside from Bain) isn’t cringey. The plot and dialogue are straightforward and delivered in a competent manner. Bain, of course is wooden. She had two expressions; mouth closed and mouth slightly open, the latter to express extreme emotion, but not a smile nor a concerned frown were allowed to mar the perfection of the face, lest they lead to wrinkles.

Keep an eye out for young Ian McShane! He’s in one of the first few episodes.

I had the totally kick ass lunch box in elementary school! - 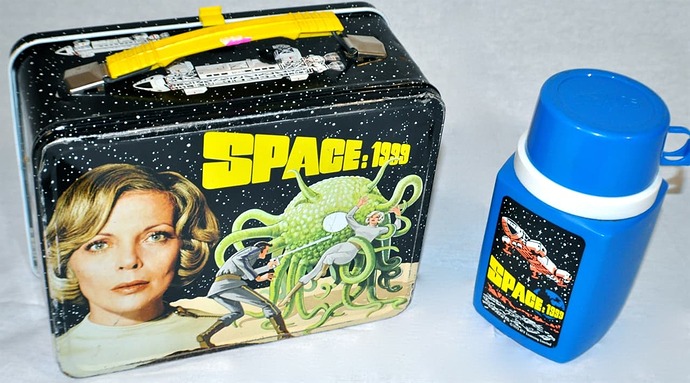 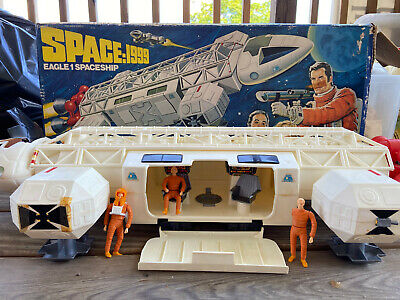 I always loved the design esthetic of Moonbase Alpha.

As far as the quality of the show, it was equal if not better than all the other 70’s TV sci-fi shows:

But it’s all we had.

Series 1 is still fun-ish to watch. Series 2 not so much.

Yes! Episode 2, “Force of Life”, I’m watching it now. What else are ya gonna do on a Sunday night?

I watched Space: 1999 when I was a kid and it was originally on.
I remember thinking, “Wow, this is terrible.”

The explosion on the moon somehow accelerates the rogue satellite to a velocity several times the speed of light (allowing it to travel between star systems); and yet slow enough to allow for away missions to each planet they encounter on their journey. I don’t think that scientific verisimilitude was an important consideration in plotting the series.

Was it season 1 or 2? Season 2 was indeed terrible.

But they had Maya who was weird/hawt 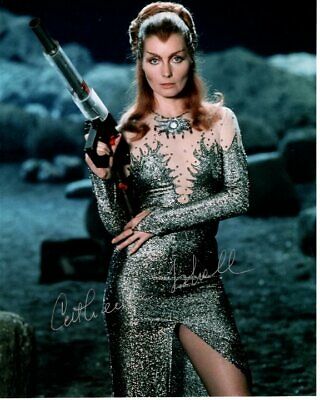 and that episode with the one eyed blob creatures. 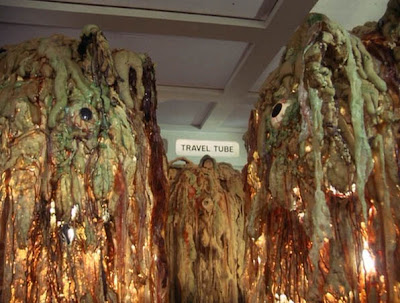 Like many shows of my childhood it’s probably better to stick with the memories than to revisit the actual show.

This. I have learned through bitter experience that the suck fairy has visited most, if not all, of the things I loved as a kid (which to be fair was way too many decades ago)