Yes, this “classic” comic strip, originally published way back on September 19th, 2014 is “getting a fresh lease on life.”

I’m not entirely convinced that the comic wasn’t an intentional reference to #GG in the first place.

Also worth noting: You can currently (until October 30) buy a “Go Away Sea Lions” t-shirt: http://teespring.com/terriblesealions

yeah, “classic” is a bit much, even at today’s breakneck speed of things. at least if you had said “instant classic,” that would’ve helped your case.

I’m kinda terrible at symbolic cartoons, which one is the sea lion supposed to be?

It’s the large, roundish one that’s grey all over instead of having the white circular blobs near the top.

I like “sealioning” as a verb for that thing we’re talking about, but I’m not sure I like this particular comic as the lesson-teacher, since (if we are silly enough to take it seriously enough to consider the implications of sea lions being an actual ethnic group, which is basically what we’re doing) the woman does instigate things by being racist in public, and could probably defuse the situation at any time by admitting she was wrong and apologizing. That’s not really a good analogy for Gamergate.

“Actually, it's about ethics in game journalism.” boing

Well, FoolishOwl, apparently Stormfront has sided with Gamergate, in order to stop the Jews from destroying video games and the white birth rate. So that’s one side… And on a completely unrelated note: [A comic about Seagulls. If you feel like this comic doesn’t accurately represent you, and that you personally don’t act like this, good. That means this comic isn’t about you. If you DO act like this,...] this comic [which continues] might be interesting. But the forum software shows the first… 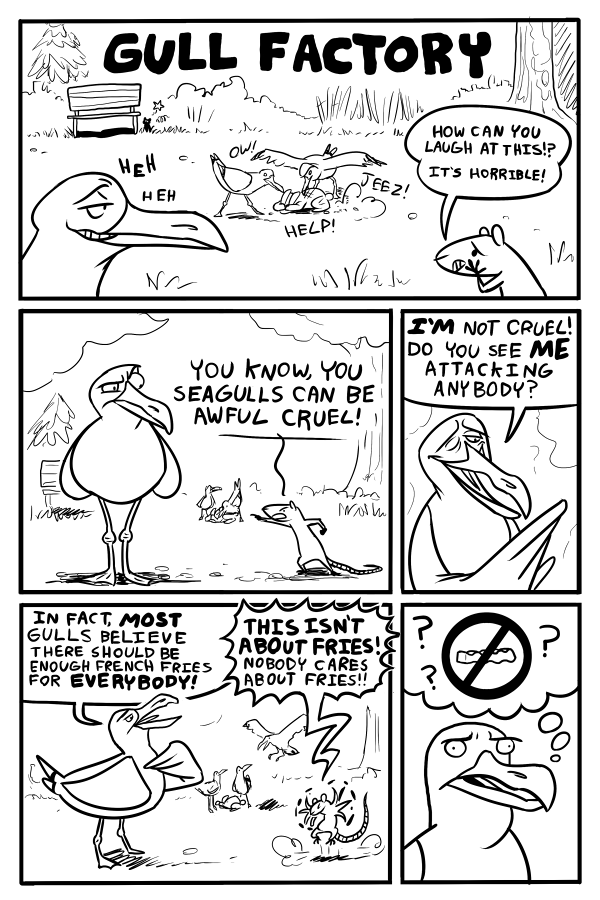 A comic about Seagulls. If you feel like this…

Edit to fix link to the rest of the cartoon – there are a couple more panels.
Edit 2: since the pepperonideluxe page doesn’t seem to be loading, here is somebody’s repost:
Laughing Place • pepperonideluxe: A comic about Seagulls. If you…

I confess to not really getting it. Someone expresses a racist (well, speciesist) opinion in public and is asked to justify it with evidence… and the main problem seems to be that the sea lion will stop at nothing, including home invasion, to get an answer. So the takeaway is… what? Don’t ask people to justify crazy opinions? Evidence-based belief is bad? Persisting in asking someone for a reply on an online forum is somehow the same as physically invading their home and interrupting their breakfast? Or is this about strangers annoying people on their Facebook or something? And what exactly has it got to do with Gamergate?

So many people find this metaphor utterly opaque. Here’s a hint: if it seems not funny and makes no sense, maybe it’s time for a mirror.

The sea lion’s annoying harassment validates the woman’s first-panel expression of disdain. The metaphor is a loose one though; an actual sea lion can’t help what it is (ergo “speciesist,”) but think of it as a symbol for a class of voluntary attitudes and behaviors — substitute “sea lions” with “entitled sexists” and it makes more sense.

But it’s not as funny.

implications of sea lions being an actual ethnic group, which is basically what we’re doing

Do you believe that ethnic groups exhibit common behavior? Who are you pointing fingers at as a racist, again??

Oh, Seals are okay, but not Sea lions? And you’re judging them on their colour, too?

What I really like about Wondermark is that he doesn’t necessarily pick sides in every war or battle. Instead he uses his absurdist humor to highlight in wich ways things are broken.
More to the point, he focuses on those moments when the normal social conventions fail to work in a new environment, but are still being applied.

In this case, if we are to take this comic as a straight up parable for GG, I don’t think the point is to decide who’s the sea lion and who’s the victorian era woman.
Rather, I see this as an illustration of the cognitive dissonance that ensues when we mistake hashtag wars and buzzword retweets for actual conversation.
And how some people, or seal lions, are exploiting that cognitive gap.

Thank you! I know explaining the joke is never fun, but I appreciate you taking the trouble, rather than going the childish and arrogant “If you don’t get it, you ARE IT” route.

Do you believe that ethnic groups exhibit common behavior? Who are you pointing fingers at as a racist, again??

Do remember that we’re talking about imaginary sea lions before you start accusing people of being actual racists, eh?

In any case, no, I didn’t say anything about the character of sea lions as a group. The people in the strip did that. I only have the example of one sea lion to go on, and even if that one is a bit intrusive and obsessive it’s no basis to judge all of its proud and noble brethren.

Yes, the bit works much better if you assume that sea lions are a voluntary association rather than an ethnic group. I’m not sure that’s clear enough from the context, though. For an Aesop-style allegory to be successful, the labels need to be reasonably clear. That Gull Factory strip worked better, e.g.

Though, one big problem is, if you replace “sea lions” with “feminists” or “SJW”, the cartoon ALSO encapsulates what those entitled sexists believe about THEM: that they can’t just let things be and stay out of areas they’re not welcome, they have to harass with seeming reasonableness everytime a group of people are just having a discussion among themselves.

Note: I don’t believe this is the case (individuals aside), but I’ve seen that seems to be a point of contention among a lot of people.

Anyway, the first time I read this, I thought the sea lion was the hero, because of the “speciesist” element. The woman just denigrated a whole species and was, very rightly, getting called on it - the fact that the sea lion followed her home to protest such evil treatment just struck me as the same kind of comic hyperbole that allowed a talking sea lion in the first place. Later, when I read it in the context of GamerGate, I kind of saw what they were saying, but I think it’s far too muddled and problematic a cartoon to become a good parable.

Hey hey hey- Slow down there. Nobody has a problem with any color sea lion here. I mean, my sister once dated a sea lion- seals, sea lions, we’re all friends here, right?

It’s not like you’re a walrus or anything. Don’t get me started on those tusk fuckers.