They should have sent a Poet!

My takeaway from this post is that I might be able to get someone to pay me $50 for my Dreamcast. I had no idea.

I didn’t desire a Dreamcast at the time (or since), and have no particular feelings for Hello Kitty, but this has made me realize we need more translucent pink electronics. I’m not sure why I didn’t realize this before - so many consumer devices would be greatly improved by a translucent pink version…

So a friend of mine used to play this “game” called “Did they ever make a Batman…?” and the only goal of this game was to say “YES!” as fast as possible because whatever noun they tacked on to the end of the sentence was irrelevant.

With my wife being a Hello Kitty enthusiast we quickly realized that that game variant is exponentially more easy because she’s on EVERYTHING.

Is there a Hello Kitty motor oil? Yep That Hello Kitty sure does get around. She’s on everything – cell phones, socks, backpacks, and now… motor oil. This is no hoax – AGIP, a subsidiary of Italian oil company ENI SpA, has combined forces with the company that owns the rights to the... 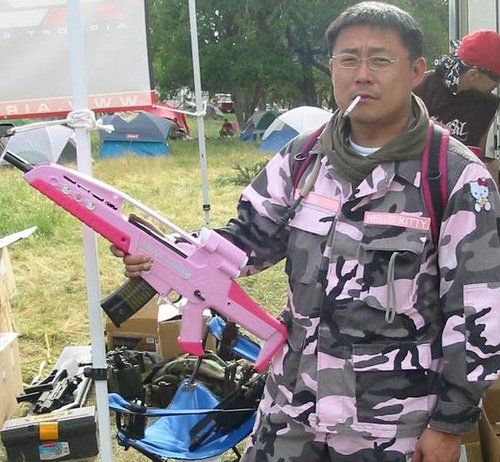 there's so many thing to say or opine about this specific image......yet none of...

there's so many thing to say or opine about this specific image......yet none of it can come out of my mouth.......

“Is there a Hello Kitty branded…?”
Yes. Yes, Virginia there is Hello Kitty and she is EVERYWHERE.

http://www.kittyhell.com/
(some NSFW, mostly SFW though)

Sold some of these back in the day, wish I’d kept one for myself.

It’s a tasteful shade of pink.

I would almost say it’s salmon.

I saw one of these in a video game museum exhibit a few years ago.