I see them in toy departments of stores like Target all the time. I could probably pick one up at Fred Meyer; I think they had a few movie-tie-in versions as well.

If you haven’t seen one in years, you just might not be looking too hard, methinks.

And a remake of the original version sells on both Amazon & EBay. 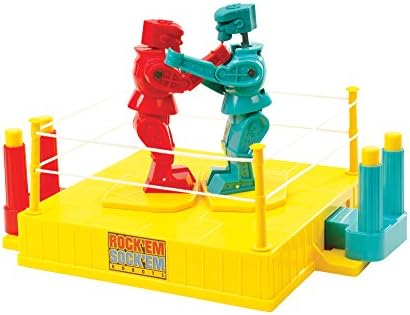 I think they had a few movie-tie-in versions as well.

Plus a big-budget film adaptation. Real Steel is a 2011 American science fiction sports film starring Hugh Jackman and Dakota Goyo and co-produced and directed by Shawn Levy for DreamWorks Pictures. The film is based on the short story "Steel", written by Richard Matheson, which was originally published in the May 1956 edition of The Magazine of Fantasy & Science Fiction, and later adapted into a 1963 Twilight Zone episode, though screenwriter John Gatins placed the film in U.S. state fairs and other "old-fashioned" Americana sett...

That is great. Do they reference the game in the film?

We have “life-sized” ones at work… unfortunately, not playable

OK, technically they claimed the movie was an adaptation of a short story from the 50s. But come ON, that was clearly just a lie so they wouldn’t have to pay royalties to Mattel.

After being raised like this it’s no wonder they grow up wanting to Kill All Humans.

What the hell has my life been? I’ve never had any toys like this. No Rock 'em Sock 'em Robots, no Gnip Gnop, no Operation.
Just a hell of a lot of Tonka or puppets.

The basic concept is much older than you would think. These are from San Francisco’s Musee Mecanique – an antique arcade. Note the “knockout” switches located near the mouth.

We need to integrate a digital version into Discourse for 2nd Amendment threads. @codinghorror?

Back in high school my friends and I pranked the school administrators by gathering a large circle of students around a Rock 'em Sock 'em Robots match at lunch, everyone yelling “fight! fight! fight!” One of the vice principals rushed in to break up the skirmish; it was great watching his expression morph from concern to confusion to anger to relief to laughter.

Sadly, the current version sold by Mattel is a smaller cost reduced version of the original MARX toy.

I’d almost be willing to pay for such a feature.

On the site that shall not be named, I suggested having digital rock em sock em robots for sorting out disagreements several times, to no avail, of course…

We used to play Talk to 'em Reason with 'em Robots.

We need to integrate a digital version into Discourse for 2nd Amendment threads.

Hey, it’s been days since I called you OMike!