This 1987 video demonstrates the first version of Adobe Illustrator

When my company bought the first version of Illustrator so I could trace printed maps, it came with that video tape which they gave to me. I took it home and watched it. Later, I would tape over it with the first ever episode of “The Simpsons.” 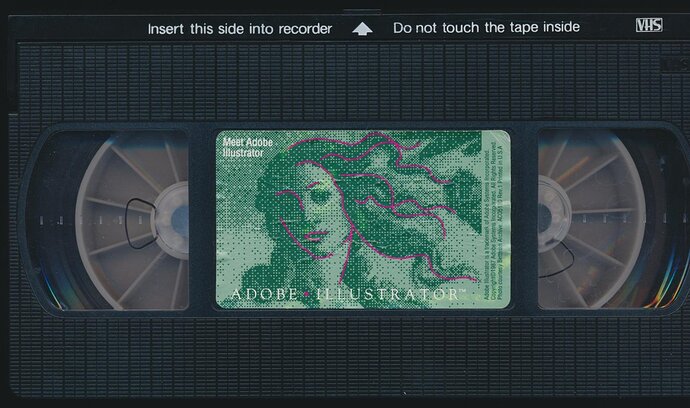 You’re not the only one. Just recently, my wife, a college designer friend of ours and I were lamenting how much we preferred Freehand to Illustrator. Sometimes the market decides, and it decides in favor of an inferior product.

And PageMaker, before bought by Adobe, before Quark and InDesign - what an awesome tool that was, and simple by todays standards.

and it decides in favor of an inferior product.

Illustrator was not inferior though, it was a very deep program, capable of doing a lot of production stuff that Freehand didn’t care about. One of the things that amazed me about Adobe products (pre-CS) - you just had to think to yourself “what would be the logical way to do that?” and you would be right. Because Adobe engineered every possible way to do a task into the software. There were at least six ways to do every different thing. Of course, most of that was lost when they had to switch the base code.

Freehand was not easier, just used a different method of making the splines, it really is hard to adjust between the two - but one isn’t better than the other. I’m running into that with Fontlab now, that has a different approach to vector drawing. I find myself cutting and pasting between the two apps to take advantage of the differences.

I think in the early versions, up to when Adobe purchased and killed Freehand they had similar depth.

I learned to draw with splines in Fontographer and I found it effortless to use Freehands spline tools as they were so similar.

Back then I remember that illustrator had you work in a non wysiwyg interface switching to preview to see what it looked like, where as Freehand had a more direct interface. It felt more like CAD than illustration back then.

had you work in a non wysiwyg interface

You didn’t have to work that way - as long as you didn’t mind waiting a minute between clicks.