Short documentary about the evolution of Photoshop

A senior Adobe guy gave a presentation to our class at business school years ago. What I remember him emphasising was the unlikeliness of all their key products at the time of release:

I might be mischaracterizing this (and quite a lot), but it seems to me that this company had some vision. Perhaps a time-travelling founder.

Before Photoshop, it took a Doctorate in Mad Science to graft a human face on to a pug, and putting a pug’s face on to a person was still just a distant dream. True story.

I’m waiting for the follow-up expose “Who Killed Fireworks?” 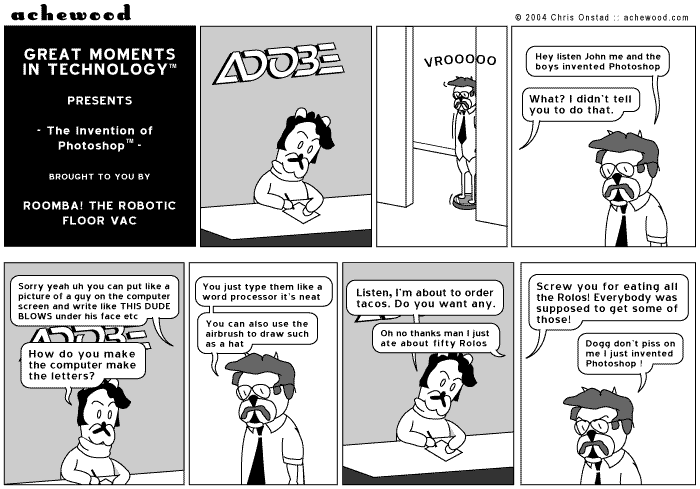 I’m much more comfortable with Adobe Illustrator than Photoshop

Then where did this picture of you clearly enjoying Photoshop come from?? 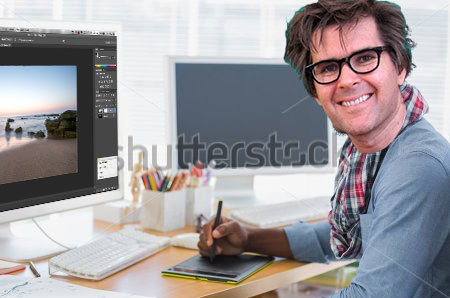 I went to school for graphic design, and the one single course that let students use Photoshop was a single “Digital Drawing” course that covered both Photoshop and Illustrator. Photoshop, at the time, had no layers or many of the tools central to it now. We learned elaborate workarounds involving channels to place objects on top of one another. A few months later I was working at an internship when my boss said “hey, we just got a copy of the new Photoshop. It’s got something new called “layers”. Take a few days and learn it, okay?”

I also vividly remember that to draw in Illustrator, one would do all their work in black and white wireframes before “rendering” the art into a preview of the color; it was impossible to directly work in color back then on our college Macs.

I wonder if it has do do with the way we see the world? Photoshop is much more intuitive to me. Illustrator drives me crazy. The tools just don’t work the way I want them to. I don’t think like an illustrator, and illustrator just doesn’t do (AFIK) simple tasks it ought to, like multi page documents (like Macromedia Freehand could), or repetitive layouts ( I shouldn’t have to cut and paste multiple copies of a business card to make a sheet of them - Illustrator should have automatic imposition), or real-time automatic symmetry/mirroring (I shouldn’t have to make half of something then cut it, flip it and merge it to make a symmetrical design.)

I don’t think like an illustrator, and illustrator just doesn’t do (AFIK) simple tasks it ought to, like multi page documents (like Macromedia Freehand could), or repetitive layouts

You can use multiple artboards in Illustrator pretty easily, but most graphic designers use InDesign to create multi-page layouts and templates. You can also use symbols in Illustrator for a lot of the tasks you’re describing.

I’ve found it’s usually easier for students to pick up the basics of Photoshop than Illustrator because there are more real-world analogs to the tools. The brush tool in Photoshop does more or less the same thing that a real brush does on a canvas, but using the Pen tool in Illustrator is absolutely nothing like drawing with a pen.

GIMP - the free and open source alternative to Photoshop.

GIMP does everything I need, just like Photoshop, but free.

I usually try to explain the pen tool as “playing connect the dots, but you decide where all the dots go.”

In the last year of college my school got one Mac, we used it for typesetting mainly, we’d print it out and use it in paste up on bromide cameras.

Photoshop was released that year, I don’t think I used it until I started working the following year. I adapted to computers in that environment very quickly, which wasn’t everyone’s experience, and that’s probably how I got sucked out of doing what I enjoyed and ended up doing more coding than designing.

Needless to say, I preferred the days when the plebs hadn’t heard of photoshop and it’s use was a black art known only to designers. These days my phone can do most of what I used to do on photoshop back then with one “auto” button.

Hmm… are those damn kids on my lawn? Excuse me…

GIMP - the free and open source alternative to Photoshop.

GIMP does everything I need, just like Photoshop, but free.

It’s fine for a lot of things but the learning curve is way harsher* and for some reason they still haven’t gotten around to adding CMYK or higher bit color images (I’ve been hearing “we’re working on it” for … literally as long as we’ve been in 2.0+ ?).

For most things most people use Photoshop for, it’s absolutely good enough. It’s not a direct competitor though.

*As least it’s not as brutal as Scribus. Plus it works at least 10x better than Scribus. Whenever someone gives me a hard time about paying for software, I tell them to go DTP in Scribus. I love that they’re trying but I’m not sure it could get much worse. Between Adobe’s perpetual software renting model and Scribus, I’m considering buying Quark.

For most things most people use Photoshop for, it’s absolutely good enough.

Most people can get by fine with the free product, but if you’re not one of those people then you’ll definitely appreciate the differences.

Umm… Got some old taste ! I’m unable to think to use Photoshop without layers, Because of it’s multiple uses.