This graph shows causes of death by age

It’s a little bit disconcerting to know that “external causes” is no longer the most likely way I will die.

Would have been handy to have a second axis that plots the mortality rate by age.

As an FYI, this is using the same dataset as my first Tableau experiment (I was waiting for my corporate license), so if you want to drill down into the data elements (conditions, not genders or races) then that’s all here.

Also: Holy crap I need to fix that thing if I’m going to leave it up there. It was just an experiment with actions controlling other parts of the viz. It’s totally amateur hour. 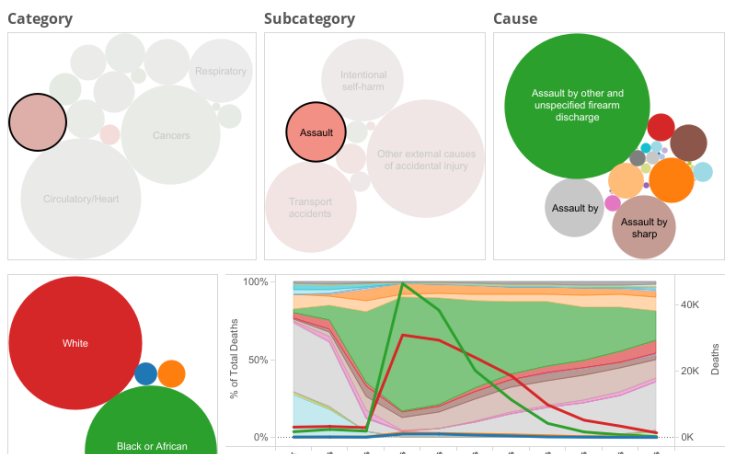 Various zoomable bubblemap and other experiments using the CDC's mortality...

I’ve never used tableau–as a pivot chart nerd, should I?

It’s really comfy to work with.

After doing all the work I had to do with Business Objects and such it’s kind of like easy mode for a good number of basic tasks. Only problem I’m having with it is there are some situations where I don’t have as much control as I like (the order queries are run, preventing double-clicking, controlling the zoom value so that hexbinning works properly, etc.), but I’ll eventually just link it to D3.js for the fancy stuff.

Honestly it’s a really good tool to learn, since you can use it free and with all the features with Tableau Public and a lot of companies are looking for tableau skills right now.

The choice of the colour grey for external factors is appropriate. It’s like a soggy blanket of misfortune weighing down on the other causes. I think of the added bulk of the blanket pressing down on young adulthood as all of those foolish things I did in my 20s. They mysteriously didn’t kill me but apparently claim others. Maybe I’m immortal?

I find that type of chart impossible to read. It looks like something is going up, but the overall sum is going down, and I’m left with no way of understanding the data.

It does me no good to know that heart attack is x% more likely than cancer, because I’m definitely not going to die of 30% heart disease and 50% cancer. I think about my own death very differently from the way I think about everybody’s death.

And here you go! I did a couple of quick fixes over lunch!

You can do multi-selects and such, and it looks more like the other one (the first tab has a replica) but you can interact with it and figure out more about what’s going on.

The early forties look terrifying; it’s like everything is equally likely to kill you. How do I prepare for that?!?

The early forties look terrifying; it’s like everything is equally likely to kill you. How do I prepare for that?!?

Probably because the infrastructural causes were addressed long time ago, and because we have antibiotics now. Get the infrastructure to break down, and the ABs to lose efficiency (assuming no alternatives like RNA interference or phage therapy), and we’re back there.

I was surprised to learn that 10% of people die from trying to figure out graphs… . . .

I was surprised to learn that 10% of people die from trying to figure out graphs… . . .

I didn’t see that on the graph… but now I’m afraid to look again.