This pan does a heck of a job making brownies!

I always regarded crustless brownies from the centre of the pan as superior. Does this make me a heretic?

If so, you and I are in this together!

Heretic or not, I agree. I wish I could make some kind of spherical crustless brownie pan, but I think it might require artificial control over gravity.

Heretic or not, I agree. I wish I could make some kind of spherical crustless brownie pan, but I think it might require artificial control over gravity.

Whenever I see ads for these type of “every piece has a crust!” Mrs Ficus laments that there’s no special “only the center” brownie pan. (As for me, I’m pretty indifferent.)

You and @Glaurung aren’t alone here.

Drew notes: “[Y]ou could just pour your brownie batter into muffin tins, which you already have”.
http://theworstthingsforsale.com/2013/03/10/edge-brownies/

But that is in regards to a rather more questionable product.

He also links to a Brownie Bar Maker: 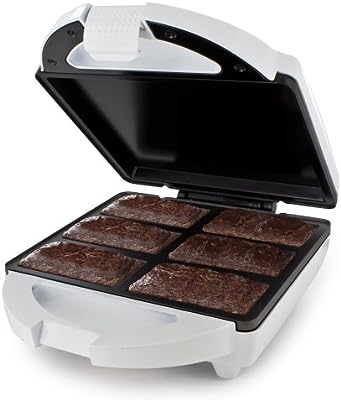 I’d think that you’d want heat to create the edges, not necessarily thin metal sides. Obviously, someone needs to do a bake off comparison with this:

(ah, there’s the image, but Jorpho beat me to it anyway)

Apparently it’s possible to make crustless bread by passing electric current through it instead of using heat- the dough is put between two big electrodes and a voltage applied.

…passing electric current through it instead of using heat…

Kinda gives a new meaning to “electric brownies” doesn’t it?

Maybe I’m just a freak, but I always enjoyed center pieces (no edges) from a normal pan.

Hopefully the so called tolerant left-libertarians here can accept my alternative lifestyle.

PS: I edited in a wink because I worried I actually sounded like an alt right troll. Something something Poe’s law

This politically correct era has now officially gone too far! Why must we turn a single serving brownie into eighteen servings now? This is too much!

But that is in regards to a rather more questionable product.

Alton isn’t fond of that pan, either:

That thing. Is a hideous waste. Haven’t these people ever heard of basic loaf pans?

I got your edge right here:

I think brownie batter has enough cohesion that you could make a spherical pan, layer the brownie mix over the pan, and then bake it in an oven. Provided that oven was in free-fall. Might need to have a couple of wires to keep the pan centered and perhaps to vent the inside of the pan to the outside to keep the temperature even inside and outside, but we’re talking about an arbitrarily small amount of crust there.