And the “we are making the plot” instantly brings back the reality that the author of a work chooses the plot, it doesn’t just “happen”. (So many ASOIAF comments about the series having to be packed with rape because “realism” flashing through my head.)

wild applause I was entirely unprepared for that level of brilliance at this point in my day. Thank you.

I predict this is going to be a loooooooong thread. 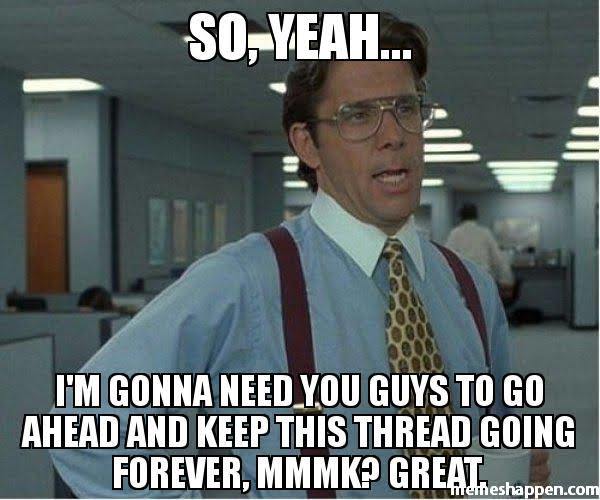 The incredible thing about this ongoing problem is that Hollywood figured out how to do “strong female leads” at least as early as Alien in 1979. Even the scenes where Ripley was in her underwear weren’t played for sexuality. Why can’t contemporary sci fi/ action/suspense films seem to manage it?

It certainly was when it got posted to Kotaku.

I was going to suggest a warlock, but they already called the walrus.

You know how Gawker had a massive collection of idiots in the comments before it shut down?

They all migrated to Kotaku.

I only have a problem understanding one of these three facts. But then, I’m an old fart who watches a lot of TCM.

If most big Hollywood productions in the '30s and '40s had involved multiple whacks at the Buck Rogers, Popeye, and Tailspin Tommy franchises, there would likewise have been damn few strong female roles back then.

I’m impressed. Figuring out how to blame the victim in this situation was very inventive. Women in the 21st century aren’t like 3 women from 80 years ago; ergo, it’s all their fault that comic books “probably always will be targeted mainly at adolescent boys” and thus female characters in big Hollywood movies are what they are. Of course.

It’s not the fault of the actresses. It’s the fault of whoever decided that comic books are what movies are going to be about.

You can’t explain away the oversexualization of female film characters just because they were inspired by comic books. The original version of Harley Quinn wore a full body outfit that looked like an actual Harlequin costume. The live action film version looks like a “Suicide Girls” model by way of Hot Topic.

Comic books were, are, and probably always will be targeted mainly at adolescent boys.

Untrue, in fact. That’s been changing slowly since the late 80’s with the release of “Watchmen”. Check out anything by Alan Moore, Brian K. Vaughn, Warren Ellis, Robert Kirkman. You’ll find a lot of mature stories, many of which have found their way into film.

Nah, it was the one guy there who was playing the “words mean only what I want them to mean” game.

My 6-year-old daughter is a comic book nut so it’s nice to see the landscape changing (albeit slowly). She’s plowed through all the Raina Telgemeir graphic novels and is a huge fan of female superheroes too. I personally think The Unbeatable Squirrel Girl is one of the greatest things Marvel’s put out in years.

The realism argument is both a good and a bad one. Obviously a science fiction or fantasy story (and fiction in general) shouldn’t have to confine itself to what’s realistic. That would be boring. However, one of the important things to keeping a reader (or watcher) is suspension of disbelief. One important aspect of this is what you might call “like reality unless noted”. The stuff that isn’t obviously fictional should feel broadly correct to the reader. If it isn’t it can be jarring. Obviously, what’s jarring for some doesn’t bug others. One person may find weird (esp. female) anatomy in comic books a problem while another sees it as a fairly neutral stylistic exaggeration. I get bugged by inaccurate hacking scenes and science talk. A HEMA enthusiast gets annoyed at fight scenes that don’t make martial sense or at nonsensical armor.

In the case of ASoIaF/Game of Thrones, GRRM has set up Westeros as a direct parallel to the War of the Roses era in England and the world to the late Middle Ages in general, warts and all. For the parallels to work and resonate with people, all the non-fantastical elements have to not feel out of place in people’s perceptions of the real Middle Ages. One of those elements is that women back then were not seen as equals to men or even as full people. Depending on where and when you’re discussing that can be more or less historically accurate, but it is the general perception.

One of the easier ways to show this gap in attitudes in a story that aims for unvarnished realism is to have the rape of women in circumstances like war (which happened a lot throughout history) or marriage (marital rape was legal until the 70s in the US) treated as kind of a fact of life. It’s not the only way GRRM demonstrates it (Cersei’s frustrations with her lack of inherent political power is another), but he leans on it a fair bit because the story he wants to tell has a lot of war and violence in it. Whether the story needs the violence in general is another matter, but the War of the Roses was pretty bloody, so maybe graphic descriptions make sense. Given that fact, underplaying or outright ignoring sexual violence (especially while graphically depicting non-sexual violence) would seem to be doing a disservice to the people so victimized in our own world, essentially implying that the kinds of crimes committed against them were somehow not important enough to be mentioned in a work that purports to resemble our history in a lot of ways, ugly ones included.

Now, I would say that the show’s treatment of rape (and other violence), as well as sex in general, leaves something to be desired. It sometimes feels like a 15-year-old guy’s idea of what is “adult” rather than a truly mature approach to the subjects at hand. There’s a tendency for shows on HBO and similar to put “adult” content in seemingly just because they can. Game of Thrones definitely falls into that trap (brothel scenes, anyone?).

It’s probably something of a reaction to how regulated US network TV and cable is in terms of content, especially sexual content. Like the repressed teenager who gets to college and goes nuts with the freedom, the writers go crazy when they can finally have nude people in their show (though the vulva to penis ratio is really disappointing). I think a relaxing of the rules around content on TV would be wise and that advertisers should be less prudish about web content for this reason and others. If everyone can get away with some stuff so long as it serves the plot well, than people have the experience to be more mature about it and there won’t be the same pressures on HBO et al to provide the “gritty realism” or “maturity” that’s missing from stuff for general audiences in the form of gratuitous “adult” content. That then frees them to be “adult” in other, more meaningful ways.

The Unbeatable Squirrel Girl is one of the greatest things Marvel’s put out in years.