As a Nurse and also someone who was a Caregiver for someone with Alzheimers until they died, the most difficult part for most un-trained Caregivers to understand is that the person they are caring for is NOT going to “get better”.

And caring for a patient with dementia is tiresome and overwhelming.

In my country, the task of caring for the elderly usually falls on the shoulders of women. Daughters and daughters-in-law end up taking care of them not because of a vocation, but because they are available.

Often the tasks become so heavy, physically and emotionally, that many families are forced to face the dilemma of placing their loved ones in an institution. While some do this without hesitation, many feel a lot of guilt, even though they were unable to care for the elderly at home.

Even though the population is aging rapidly, it seems that no one is paying much attention to this problem.

I saw this situation when I was a kid and today I’m trying to learn a little more. Even though I have taken caregiving courses for the elderly, I know I’m not prepared for this.

I often joke that a good business plan is to create a network of day care centers for the elderly. This place would receive the elders in the morning, have recreational and therapeutic activities and facilitate socialization alleviating the burden of people who have to work and cannot afford 24 hours
Home Care or a good institution.

I would highly recommend seeking out videos on YouTube from TEEPA SNOW.
Several years ago I ended up buying all the DVDs from her website to get other family members to watch them so they better understood what we were up against. They are VERY good at helping people understand what life is like from the POV of someone with Dementia and what they really need.

I ripped all the DVDs to mp4 files so we could watch them whenever and then donated the DVD set to our Library thinking that others could check them out without spending hundreds of dollars, but the Library apparently just sold them to raise money. oh well.

My Mother-in-Law has dementia. She also has Altzheimers. That was confirmed by an MRI scan a few months ago. She has gone rapidly downhill. One daughter is two hundred miles away, in Newcastle, and the other is my wife. We are five miles away from the quiet housing project in which she lives now. While my wife was abroad, I became one of her principal carers.
She asked me, “Why do you have to be here to give me medicine?” I explained gently that the syndrome she was suffering from was progressive, and over time, her memory was going to get worse. So to forestall that, someone needed to be there to hand over the medicine for the time when her memory was so bad that she might either forget to take it, or take it twice, or throw it in the bin (she has already done this). “I see,” she said, “You’ve explained it very well. I understand now. But tell me, why hasn’t anyone explained that to me before?”
And we have. Many times.

One of the tutors of my caregiving course recommended these movies.

I often joke that a good business plan is to create a network of day care centers for the elderly.

This exists in certain places - in British Columbia it’s referred to as “adult day services” and it’s less of a private business venture, more part of the health care system.

“…the Journal of the American Geriatrics Society asks, ‘How do we make comprehensive dementia care a benefit?’”

Well you certainly can’t leave it in the hands of the moron politicians who have also left dental care out of the health care system.

My spouse of three decades just died a few months back from dementia at age 59. It was horrible. I was the principal carregiver, 24/7, for her final 3 years until the last 6 months when she moved to a memory care facility, then into hospice. Fortunately we have an adult care program locally that was quite helpful in providing respite services but nobody can prepare you for the intensity of the caregiving experience - no book or YouTube video. The Teepa Snow videos are good but as far as people understanding - they either do or don’t, or worse, won’t. I have great neighbors who were very helpful. My wife had horrible relatives who weren’t. Even support groups are a stretch but the Dementia subReddit is usually pretty good.

I want to point out that there is (IMO, valid) criticism out there regarding some of these caregiver tiktoks not always treating the person with dementia with dignity. It’s obviously a very challenging role, I watched my mom do it for my grandmother for many years. But there are accounts out there using the excuse of “this is hard for me/this is my family member, so I should be allowed to vent about whatever I want” to post clips that are infantilizing, embarrassing, and unconsented to by the person they’re caring for.

My spouse of three decades just died a few months back from dementia at age 59.

I’m sorry for your loss and that you had to watch the one you suffer.

This exists in certain places - in British Columbia it’s referred to as “adult day services” and it’s less of a private business venture, more part of the health care system.

As the Boomers (and I among them) reach senescence, I suspect there’s going to be a great deal of pressure to rewrite the rules with respect to medically assisted suicide. The key, of course, is that many (including myself) would want it considered literally only after we’re no longer capable of giving informed consent.

I cannot see how it won’t become a massive ethical and economic quandary as tens of millions of us require expensive end-of-life care consuming both personal and government resources that might otherwise go to improving life for the younger generations along with a massive population that by definition is unable to advocate for themselves.

Society managed to avoid tackling this problem head on because we had larger family sizes and less family mobility that could place the burden mostly on unpaid female family members. The boomer demographic bulge combined with those social changes and increased lifespans is going to make continuing to ignore a massive increase in the population with dementia near impossible.

Demography is not my children’s friend.

the person they are caring for is NOT going to “get better”.

I just had that conversation with my doctor, in reference to my mother.
It’s degenerative and getting faster and it will kill her soon.
Which is what happened to my father about 10 years ago, so she knew what was coming once it was clear that she also had dementia.

There are copyright use issues for many libraries with digital products; this is one of the reasons that, despite requests, we cannot stock Rosetta Stone language learning materials. The library may not have been able to get around the problems involved, not because they didn’t want to use it.

A lot of us are of an age where a close relative is starting to degrade mentally, and are faced with no good choices about how to care for them. My MiL had dementia, and during the last 2 years of her life became a very nasty person, to the point that we had trouble finding either in-home care or an assisted living facility who could take her. And this was someone who had resources to afford care.

I am sorry. Eu sinto muito.

during the last 2 years of her life became a very nasty person, to the point that we had trouble finding either in-home care or an assisted living facility who could take her. And this was someone who had resources to afford care.

These personality changes are terrible and challenging.

When we think of dementia, forgetfulness or cognitive loss immediately comes to mind.

But no one is prepared for the changes in our parents and grandparents. Suddenly they become irritable, rebellious, stop bathing or even empower their sexuality. Some may even harass caregivers. Not everyone knows/can handle this type of behavior.

Another thing that no one expects is that our seniors may no longer be able to manage their lives in a variety of ways. When dementia sets in, someone has to be their legal guardian.

Although it feels like the responsibility of caring for a child, not every kid has bank accounts, assets, receives government pensions or has to pay income taxes.

Sometimes we get a thread like this that isn’t easy, but it matters that we talk about this stuff.

Sometimes we just want to hear/know we aren’t alone.

I have no idea what you are feeling or the challenges you are going through as this is a personal experience. All I know is that this damn disease hits us like a boxer’s punch.

When my grandmother got sick, I was very young and I don’t remember the details, I just know that we had to give up a lot and make adjustments in our lives to take care of her.

You have my solidarity.

I saw The Father as I was losing my mother to a very paranoid dementia. It really cut deep. One of my two older brothers (both disowned by my mother twenty years ago and written out of her will) suddenly reappeared in her life to convince her that I and my wife were nefarious scoundrels bent on her destruction. Literally ten days before she passed away from multiple brain tumors, she wrote me completely out of her will and gave it to the brother who had spurned her for decades.

Dementia is horrifying. So is the costs of our lawsuit against him. As we live in Florida and I’m a liberal pariah by their standards, it’s a toss-up regarding who will prevail. Feel free to leave a comment on my blog and / or share it. I could use affirmations. 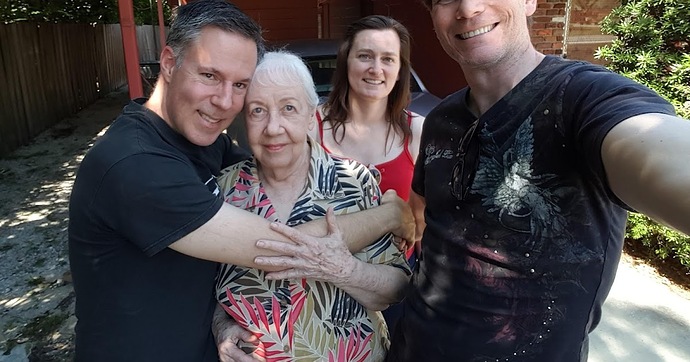 Jonas visits and easily wins her heart (This story was originally published December 22 2021. I've backdated it to appear at the beginning o...