How cute! They should play these on the screens at McDonalds, to discourage overeating!

Maybe the leaf mulch was because, after carrying a sugary morsel to the nest, they don’t want to deadhead back to the worksite?

Regarding the cut leaf bits, I’ve observed similar behavior where an ant swarm covered a food source with sand and small clumps of dirt. I assumed they were hiding it to prevent other scavengers from finding and usurping their prize. That’s just a guess though. I have no training in biology and would be interested in hearing a learned opinion.

They really went for the apple filling!

When I had some ants in my bed room, I put out that Torro poison. It is basically poisoned sugar water. I usually put it between the storm window and regular window where they are coming in. But I put some on the sill.

OMG - an hour later there were literally about 100 ants lapping that shit up. It took all my will power to not crush them, but you have to let them take the poison back to the nest to get rid of them.

How long would a piece of food, roughly the size of a slightly-obese adult male take to be eaten?

Many ants use leaf cuttings to either grow fungus in specialized chambers in their nests, or to mulch around their nest entrances to hide or retain moisture. Those ants that aren’t working in the nest to expand, repair, or guard will be out gathering leaf litter and looking for food on a loopy, circuitous path. If they find food while carrying leaf litter back to the nest they will prioritize the food and drop the leaves. You’ll notice that the leaf litter clumps up on one defined side of the food at first-- that’ll be the side facing roughly away from the nest, where the ants carrying things directly home found the food and dropped their less valuable leaf litter.

Clearly the apple pie had been purchased some hours before, giving its oxy-acetylene filling time to cool

How long would a piece of food, roughly the size of a slightly-obese adult male take to be eaten?

But once a food source, a major bonanza like an entire rice crispy bar, is ascertained, the ants would switch from loopy forage mode to “let’s eat this shit up as efficiently as possible!” mode, which means they’ll form a more or less direct trunk line between the food and the nest.

I have to believe it’s something more clever, like was mentioned upthread – either hiding the food from other foragers, or camouflaging the entire operation. The ants find themselves on a very brightly-lit high contrast surface which not only leaves their food exposed, but leaves them (and the trail back to the nest) exposed as well.

I’m not a myrmecologist but I wanted to be one when I was a kid.

[quote=“frauenfelder, post:1, topic:88312”]It’s interesting how the ants covered the Rice Krispie Treat and McDonald’s Hot Apple Pie with cut leaves. Why?[/quote]It’s clearly because they are infested with the GMO Mind-Control Evil-Drug used by all the Big Corporations. They would never do that with something Organic and Natural – no need to “experiment” to “prove” that, of course. </s>

That explains the apple pie and beef jerky ones. But in the rice krispie treat one they cover the actual food with the leaf cuttings. My hypothesis is that they use them to partially avoid the sticky surface.

I concur. At that scale, stepping in sticky must be akin to losing your shoes or even getting your feet stuck in heavy clay.

Are they really eating it, though? Aren’t they just taking it back to the nest?

“Hey, guys, I found some nice leaf over there - wait, is that a McDonald’s Hot Apple Pie?!?” [Drops leaf fragment, runs to pie] “Save some for me!”

I’d propose that they walk until they discover the yummy sticky surface, at which point they drop their leafy cargo. Each leaf dropped sticks, and gives the next ant a slightly longer journey over a little bit more carpet before they get to the next, slightly further away sticky part, and every ant adds leaf bits one at a time unknowingly. They aren’t going to intentionally cover up food that’s right at their feet to make it easier to get at other, further away food because the individual ants have no idea how big the thing is. The thing that’s cool to see is thousands of individuals programmed with a simple ‘FOOD>CARGO’ parameter come in contact with a sticky, edible treat over a long period of time! Ants rule.

In the end, we’re all just beef jerky.

My hypothesis is that they use them to partially avoid the sticky surface.

I think that’s what it is. I’ve seen a video of army ants attacking a larger slug that was much too slow to escape. At first they weren’t able to get anywhere because of its thick slime, but over time they applied bits of dirt and leaves that covered it up, until finally the slug became vulnerable. Seeing the same happen with the gooier treats but not the jerky suggests it’s the same tactic here.

It doesn’t necessarily mean they’re not just dropping things when they get to the sticky surface, of course. Ants are all about individual behaviors that happen to give good results in aggregate.

Are they really eating it, though? Aren’t they just taking it back to the nest?

For ants they can be the same thing! They have a crop in front of the stomach, where they keep food that is then distributed to other colony members by regurgitating, called trophallaxis. It’s like how birds feed their young.

Surely I’m not the only one who thought these would be even better with “Yackety Sax”. 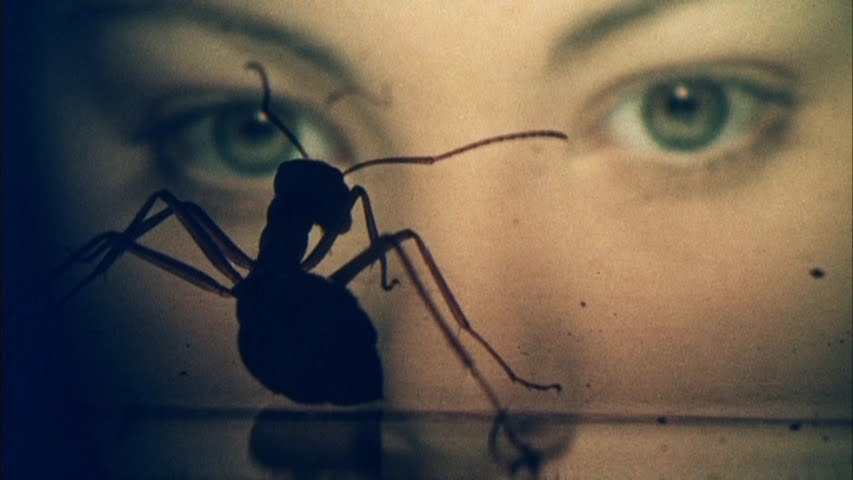