Timeholes: when a-holes get time-travel

…because you just know this is the future of ubiquitous time travel. This, or something more like the wonderful FAQ about time travel

Like the a-hole “visitor from Porlock” who broke Samuel Taylor Coleridge’s train of opium thought while writing “Kubla Khan”, pestering the poet with nonsensical questions like “But what about the albatross, then?” Pure malicious intent, poor Coleridge never stood a chance.

But what happens when all the conservatives in the U.S. start literally time-traveling back to the 1950s, instead of just figuratively trying to return there now? Will it make the present better or worse?

Robot Chicken beat them to the punch a long time ago…

This is a great clip, dicks with time machines go back in time and tell people all the wrong stuff!

What if they already have, and that’s why the 50’s were so conservative?

It would be hilarious to see their reaction when they learn that effective income tax rates are higher then than they are in the present.

It would be hilarious to see their reaction when they learn that effective income tax rates are higher then than they are in the present.

Maybe those weren’t nuclear tests at all, but conservative time travelers heads exploding. It would be really funny to send Ann Coulter back then, her conservatives would probably burn her as a witch.

Robot Chicken beat them to the punch a long time ago…

No, Robot Chicken actually stole the idea from these guys and traveled back in time to make it look like they thought of it first. A-holes.

Best moment: When the Sparkle Pony shows up from Burning Man and wanders off to find Camp Cockwhistle.

Rover is a bit of a Timehole: 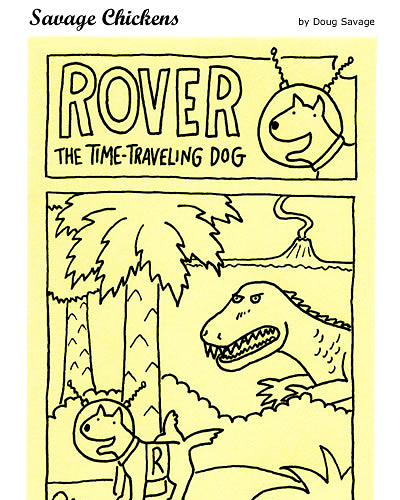