Unique perhaps, but not novel.
There was a similar design in Hong Kong - think it was featured on BB 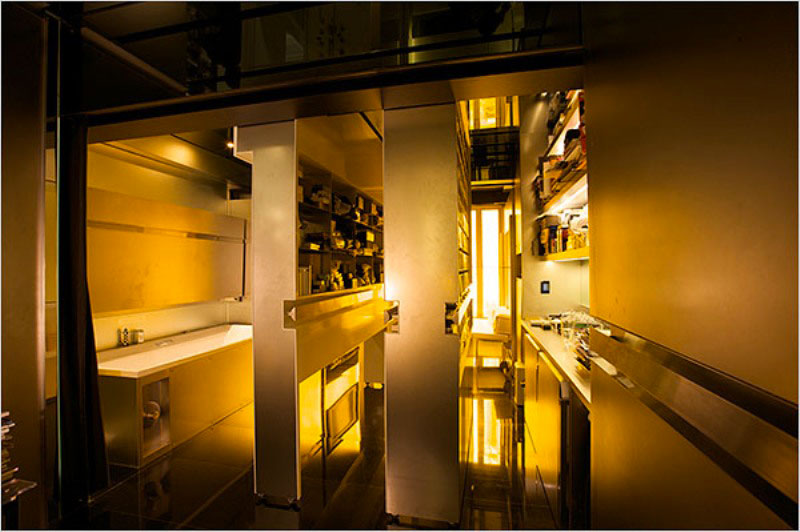 Residential space is becoming an exceptionally expensive commodity and a growing problem in urbanized Asian environments. However, architect Gary Chang from Hong Kong need not worry. His ingenious solution called 'Micro Apartment' could be the key to...

Nice setup. But I would find it terribly depressing with OSB everywhere. It’s like using shipping pallets for furniture, just reminds me of work…

Nice, but she does have a rather massive living room tho.

Yup. There’d be the constant smell of it too.

wow. much orienting. so stranded. many boards.

There’s also this New York apartment along the same lines:

I’ve seen the Hong Kong one before, and I still cannot comprehend wasting that much space for CDs.

I used to live in a house that had a central island housing the kitchen and bathroom, with the living room on one side and bedrooms on the other. It seemed like I spent half my life walking in circles around that island. This reminds me of that only worse.

Hong Kong guy complains that he has too much storage space. He obviously needs more CDs, or maybe thicker storage cases.

As much as I enjoy the cleverness of these little apartments, I also find them a little depressing, as ultimately they are driven by the absurd density of some of our cities. (Not that the American obsession with big, sprawliing, lot-filling houses is any better.)

Yes, a nice plywood would be more attractive and less prone to giving splinters.

Tiny? 300 sq ft is about the size of my flat. Though I, too, could do with either more storage, more efficient storage, or less stuff. A sliding door or two would help. I don’t think the landlord would approve of me knocking the walls out to make these “itinerant spaces”, though.

After reading the title, I was really hoping to see storage compartments with massive wheels. Alas not.