Today may or may not be George Jetson's birthday

Originally published at: Today may or may not be George Jetson's birthday | Boing Boing

The name is more common than I imagined. 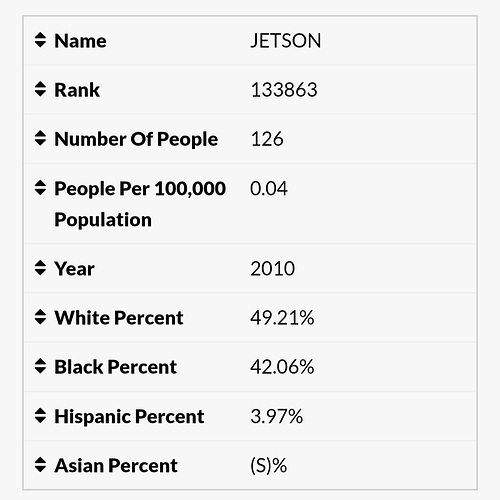 What we can say is by September 23rd he will have been born.

Since George Jetson appears to be 40, and his wife 33, that falls within the Victorian limits of half the partners age plus seven. The question is, how old are their children?
George Jetson and Jane Jetson’s official ages are 40 and 33 respectively . Their oldest child Judy is 16, which would mean that Jane was around 16-17 when she was pregnant with her. The age difference means that George was 24 when he impregnated Jane. Is this a case of Writers Cannot Do Math?
George is a baby-snatcher according to Victorian values, and a rapist by modern USA law.
In a spirit of reconciliation, I suggest that Judy has lied about her age and is actually 39.
That would make it all right, wouldn’t it?

Somewhere out there, there’s a fellow Gen-Xer someone named “Montague Jetson”. 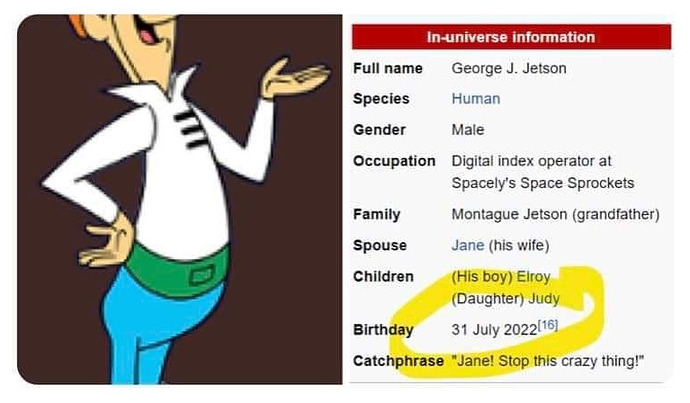 Their oldest child Judy is 16, which would mean that Jane was around 16-17 when she was pregnant with her. The age difference means that George was 24 when he impregnated Jane. Is this a case of Writers Cannot Do Math?

Or perhaps Jane just spent more time traveling interplanetary space at relativistic speeds like Ender Wiggin and thus experienced less subjective time than the rest of her family. It is the future, after all.

Wouldn’t that make her even younger? If it was George who, in his bumbling and callow youth, hopped on a space-freighter after he accidentally knocked up Jane and stowed away for a round trip to Proxima Centurai, then while he would be “40” by a calendar left on Earth, let’s say time dilation for the ~8 light year round trip was about 6 years - he’s actually (from his perspective and internal clock) 34 versus his wife’s 33, a much more reasonable age difference, and while he would have missed out on Judy’s early childhood, I doubt teen parenthood even in 2062 would be much of a picnic. And to clarify: I’m not saying he ran away from responsibility and obligations for fathering a child, but given his portrayal in the series more likely fell into an accidentally open cargo hatch while visiting a spaceport and spent a couple of years in transit eating nothing but food pills while slowly going insane from space madness. I imagine running on automated conveyor belts played a significant role at some point, hence his elevated emotional response and clear post traumatic stress triggering every time he takes the dog for a walk.

Am I the only one that watches cartoons without doing any math or trying to figure out when they had babies?

I mean, I would occasionally yell at Daffy Duck to remind him he could fly but I never really gave much thought to how old cartoon characters were when they had babies. 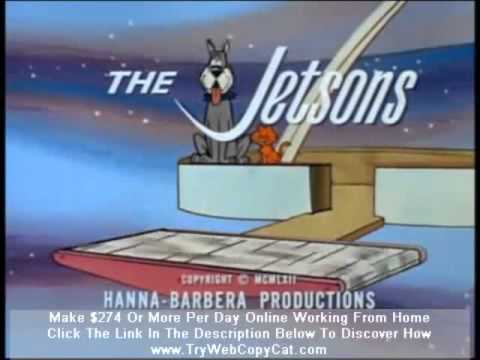 Their oldest child Judy is 16, which would mean that Jane was around 16-17 when she was pregnant with her.

Per this article which the post above linked to, Judy was canonically 15 in the first season.

Great. Now I need to know if Astro is descended from Scooby.

It is almost certainly true that Jane is lying about her age, and that she is much closer to 40 than 33: a joke in which a woman says “don’t be silly, you know I’m only n” and lies about her age is a common sexist trope in 1960s comedy. She would say “33” rather than “29” precisely because she didn’t want to imply that she’s a child bride.

I’d go with Betty, but I’d be thinking of Wilma the whole time.