It’ll be interesting to see how this plays out in light of the Federal Circuit’s decision to hear the “Slants” case en banc in order to decide whether the provision barring registration of “disparaging” marks violates the First Amendment.

[quote=“beschizza, post:1, topic:65514”]This comes, however, despite an earlier approval of ZERO FUCKS GIVEN.[/quote]I suppose that means other variants may yet be attempted. 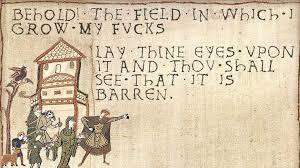 Can you imagine being the new guy, and they made you write the opinion? And you’re thinking, what’s next, striped paint?

When has anyone respected anyone else’s idea, ever?

The status of the “Zero Fucks Given” application is “ABANDONED”, not “APPROVED”.

MEH …
“Body is invalid. Try to be a little more descriptive.”
MEH …

In that case, my application for “Fucks Given” should be accepted because it’s the opposite of scandalous, right?

The real scandal is that the USPTO misspelled “Merriam-Webster” as “Merrian-Webster” in their decision. That’s something I actually give a fuck about.