If you have evidence, not comedy,

I mean, it’s not like John Oliver’s segment quotes local investigative news reports or cites federal and state government audits or anything.

There’s not a single problem with charter schools in that John Oliver piece that isn’t a problem with public schools, on a much, much larger scale.

First of all, when was the last time a public school suddenly shut down in the middle of the year without warning or recourse? (Aside from in Kansas, where Republican leadership has succeeded in “starving the beast” so severely that they can’t afford to keep schools open, in violation of state law.)

Second, if you want to talk about evidence, let’s start with you backing up your claim that the worst-performing public schools spend the most money per student. Also, average spending per student may be higher in the US than it is in other countries (another claim you’ve made without proof, but I’ll go with you on this), but that doesn’t mean that funding is being evenly distributed; minority-majority districts routinely struggle to even buy textbooks and basic school supplies for their students, while more affluent districts are putting iPads and MacBooks on every desk. Detroit’s system is a dilapidated disaster thanks to ongoing funding shortfalls that have resulted in students going to school in buildings that should literally be condemned.

There are a lot of problems with the education system in this country. Nobody is disputing that. Hell, as the son of a 5th grade teacher I know full well how fucked up things can get. Bad teachers, bad administrators, bad curriculum mandates, and bad policies all exist, and all need to be addressed. However, you don’t fix something that’s broken by putting a person dedicated to its destruction in charge of fixing it. We need to address inequalities in spending between schools, reduce the reliance on easily-gamed and poorly-constructed standardized tests, and stop punishing poorly-performing schools by taking away the funding they need to improve. We need to do a better job teaching children basic critical thinking skills so we stop electing Donald Trumps as president. DeVos will not push for any of those things, though. To her - and to you, apparently - the public education system is an irredeemable disaster that should just be scrapped and replaced with (much more expensive) private enterprises. And if that means we have to raffle off children’s access to a good education, then so be it.

Here’s the thing: parents already have a choice to send their child to a private school. I went to a private high school that cost thousands of dollars a year. That didn’t excuse my parents from having to pay taxes that fund the public system, nor did they ever feel like it should. Those taxes aren’t there to cover educating your child, they’re there to pay for educating everyone’s children, because an educated society is a critical national asset. Or, as John Green puts it:

[Y]ou need to remember that school is not about you! School doesn’t exist for your benefit, or for the benefit of your parents. Schools exist for the benefit of me. The reason I pay taxes for schools, even though I don’t have a kid in school, is that I am better off in a well-educated world.

Public education isn’t a charity project. I pay for your schools because I want you to grow up and make my life better. I want you to to make me beautiful books that will bring me pleasure and consolation. I want you to make me cooler cars for me to drive, and drugs so that I can live a longer, healthier life. I’m paying for your education in the hopes that you’ll invent a microwave pizza with actually crispy crust, and that you’ll spread the availability of the internet so that I can get more YouTube views in Zambia.

Your education isn’t just about you, your nation is making an investment in you because they believe that you are worth it.

Taking money out of the public school system by subsidizing a parent’s decision to send their kid to a private school is just another example of the “I got mine, fuck you” attitude that robs from the public good for the sake of personal enrichment, to the ultimate detriment of us all. But sure, have a happy holiday.

Does the United States spend more per student than most countries?

While some conservative activists and presidential hopefuls have trashed Common Core, former Florida Gov. Jeb Bush remains a supporter of the education standards. Bush’s support for Common Core could put him at odds with primary challengers should he...


The big secret is that the extra cost per pupil is for school supplies and lunches for poor students.

BTW, since this is all public record. Let’s see how the typical rich school district (Bloomfield Hills, literally anyone from Detroit will back this up) spends versus Detroit City: 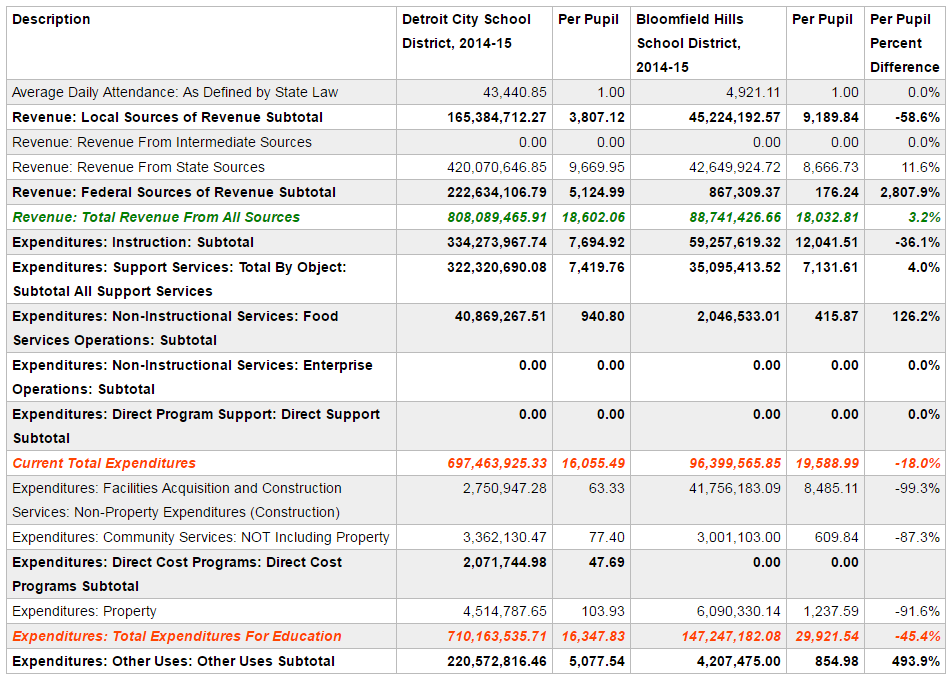 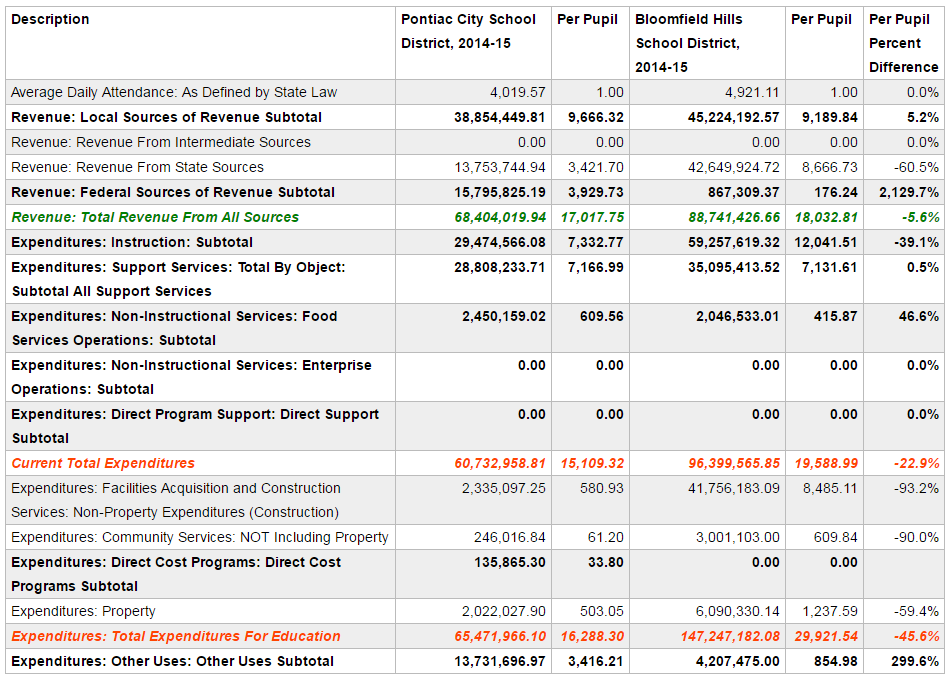