Q: “How do these people sleep at night?”

A: “They sleep at night between silk sheets on a king-sized, auto-massage waterbed, in a large house, on a quiet street with a companion whose beauty would make you weep with desire.”

Ranier Wolfcastle: “On top of a huge pile of money, with many beautiful women” .

Is this guy a liar or idiot? JK of course he’s both.

New requirement - if you approve it - you have to drink a gallon of it.

Compared to children under six months old, I believe this is true. And of course women capable of child-bearing should not be exposed to any sort of pollution… but since it’s in our air, food and water… good luck with that.

It’s crazy that positions like this - (and judges and election officials and FEMA and some others) are even POLITICAL APPOINTEES. Shouldn’t some things be above/outside of politics?

The simple formula of follow the money explains any action trump makes When I say money I mean it to be synonymous with power. The infantile trump only wants to consume and defecate. It requires a lot of power to be able to purchase the consumables and even more to buy people who will come in behind this glutton and clean up his shit. He appoints people who will be good for him and his desires. The tile of the job means nothing so long as they clear the path for this ravenous glutton as he feeds his bottomless soulless desires. 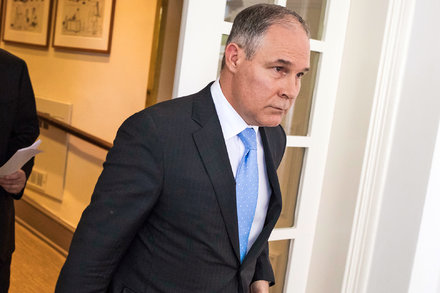 The calendar of Scott Pruitt, obtained through the Freedom of Information Act, shows fine dining with officials from companies he regulates but few meetings with environmentalists.

Nothing is above or outside politics. The more important something is the more desperate powerful people are to control it.

For example, Dourson asserted that the pesticide chlorpyrifos was safe… despite well-documented causal links between the substance and “memory, intelligence, attention, and motor problems in children.”

He later defended these remarks, noting that “whether those traits are good or bad is a matter of opinion. Chlor-kids, as we call them, are downright cuddly, and obedient too.”

“whether those traits are good or bad is a matter of opinion. Chlor-kids, as we call them, are downright cuddly, and obedient too.”

Do you have a source for this?

I did some quick searches and couldn’t find anything. Only asking because I don’t want to believe anyone could be that much of a sociopath, but these days I don’t know anymore…

We are moving rapidly towards a post-satire society, but we’re not quite there yet. There are still, for the time-being at-least, propositions that are too ludicrous to be real. This is one of them. In a week-or-so someone will assert something even more ludicrous - but it will be for real.

these days I don’t know anymore…

Sad that the Venn diagram for truth and satire occupy almost the exact same territory these days. Political satire hasn’t changed all that much in recent years, but reality has certainly tried to climb into bed with it, if not steal it’s best material.

The fact that I can’t essentially quote-tweet stuff to ResistBot is the only reason my representatives’ fax machines aren’t overflowing with messages that say nothing besides “ARE YOU FUCKING KIDDING ME?!”

That was satire?! It completely flew by me…

I’m honestly shocked by how much my bar has been lowered. Fuck.

Is it time to impeach the angry cheeto yet?

I’m honestly shocked by how much my bar has been lowered.

You’re not alone in that feeling. It’s getting to a lot of us, I think.

Here is a list of member of the Senate Committee on Environment and Public Works. If you see one of yours here, please write them and ask them to block this nomination. The hearing on this asshole’s nomination is tomorrow.

Only asking because I don’t want to believe anyone could be that much of a sociopath,

New requirement - if you approve it - you have to drink a gallon of it.

Thomas Midgley held a press conference in 1924 where he soaked his hands in tetraethyl lead, then inhaled its vapors for a full minute, telling the reporters that he could do this every day with no problems whatsoever. Shortly thereafter, he was secretly treated for lead poisoning.

American industrial heroes Midgeley and Kettering literally rewrote the nation’s understanding of lead - the toxicity of lead was known for thousands of years and was thoroughly documented, but by enlisting America’s boundless techno-enthusiasm and willingness to believe in any “science” endorsed by corporate media, the world was persuaded to poison billions of children. The full effects are only now beginning to be understood, and only because the staged phase-out of TEL provides a data trail.

Edit: James in Tom Carper’s office says they will have someone investigate Dourson’s credentials immediately and that he’ll pass my concerns on to the senator. Weak sauce, I know, but the best I can do at this point in time.