This will go… poorly.

Agreed. It sounds like this is designed to intimidate enemies of the regime (real or perceived) and protect its most deplorable supporters without addressing the thornier (but still Constitutionally allowable) issue of how exceptions to 230 might be made for platforms that actively encourage harassment and promotion of violence by their user bases while hiding behind it.

If Congress doesn’t legislate doing something, it shouldn’t be possible to order it. Isn’t that why Congress exists?

Will we need to amend the Constitution to outlaw Presidential Executive Orders?

And football (soccer in this case) is a business, with far too much money involved. Those shiny, shiny millions everywhere. And the brainwashed masses ready to fork it out.

You don’t need to look hard to find that there is far less money when the team is not as successful. Trickle down economics works as well in football as it does in the rest of the world. 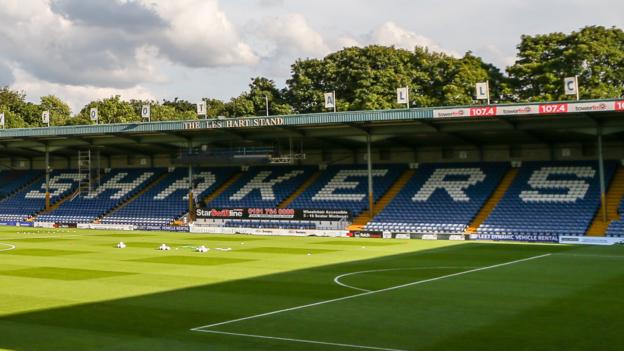 Bury are given 14 days to avoid being expelled from the English Football League after having a third game of the season suspended.

I remember some 23 years ago when the CDA was about to be enshrined into law we all thought it would be the end of the Internet as we know it.

Who would have thought (after all the terrible parts of it were struck down, of course) that it’d end up being one of the only things holding it together?

One solution would be for Comcast to buy Twitter, then Ajit won’t give a fuck what they post.

Oh, I know… our local team somehow managed to make it to L1 or whatever they call it these days, national level, after too many other teams played badly.
They never were good enough. But The Rules and the Mayor said that now that they were big boys, they needed a big stadium.
Guess who’s got an empty 25000 seats, 102 million € stadium? Because of course they lost again and went back to L2, the next year. And since some people were less than honest, the whole club was disbanded. It’s slowly starting up again, but that was a gigantic waste of funds.

Why do you think the other side has a right to utter threats and harass and foment violence? 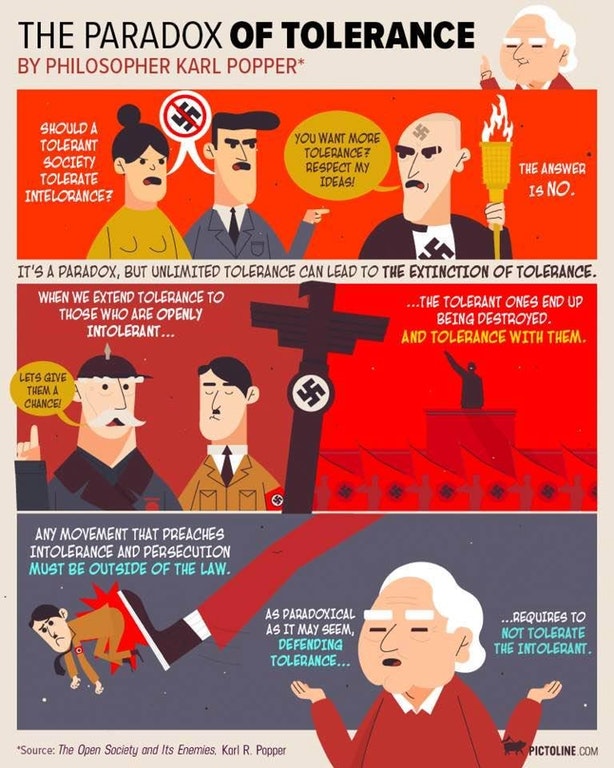 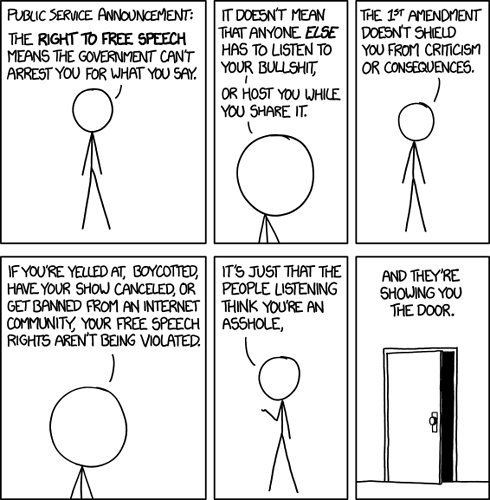 Why are you so scared of the other side being heard?

Since 2018, the term "stochastic terrorism" has become a popular term used when discussing lone wolf attacks. While the exact definition has morphed over time, it has commonly come to refer to a concept whereby consistently demonizing or dehumanizing a targeted group or individual results in violence that is statistically likely, but cannot be easily accurately predicted. The term was initially used to suggest that a quantifiable relationship may exist between seemingly random acts of terror and...

OTOH - they also kicked in the heads of queer people and minorities for marching back in the day.

Typically, Libertarians are only moved to defend freeze peach when a fascist’s “rights” are under attack. When liberal or progessive voices are actually suppressed, it’s crickets.

I didn’t say anything about the Right wing uttering threats or fomenting violence.

Yes, but I did in the comment you were responding to with your straw man about my supposedly being scared of right-wing opinion [boldface added].

how exceptions to 230 might be made for platforms that actively encourage harassment and promotion of violence by their user bases while hiding behind it.

How can mine be a strawman, I posed the original question fgs!

You posed it in response to my comment. I quoted it for reference just above. Your reply to me was akin to responding to a comment deploring wife-beating by asking “why are you so scared of the institution of marriage?”

Let me save you some time. You’re far from the first Libertarian (or whatever type of “supremely rational independent thinker” you style yourself as) to show up here trying to push this point of view with shoddy HS debate-club tactics. Every “brilliant insight” and “gotcha” you think you’re about to present (like that hypothetical scenario, which conveniently omits whether the liberal commentators in question are promoting violence and uttering threats) has been seen and discredited numerous times before. If you’re going to continue on this topic, read through the Freeze Peach topic I posted above first and, if you can, offer something new.

Well look at you! Goodness gracious, we’ve never seen the likes around here, benighted as we are by concerns about a regime that puts children in cages and distracted by our support of politicians trying to do what they can to offset the effects of climate change and economic inequality. Please, enlighten us with with your supreme logic. /s

[that last bit is a tag for sarcasm, something you should get used to. As for me, I’ve had my fun. It’s clear you won’t add any value to this site so I’m putting you on Ignore – 2 months, by which time I doubt I’ll have to renew it]

There is literally no such thing. And your professions on Free Speech here are an inherently political statement. If what you’re saying is that you like to wade into political debates without a purpose or belief system except questioning and condescending to other people’s genuinely-held beliefs…well, there is a name for that…

I said why are you so scared of the Right Wing being heard.

If you are in favor of giving white supremacists and people who want to murder Jews, Black people, and LGBT people an equal voice, yeah, no. Freedom of speech stops with hate speech. And that’s why they don’t deserve a voice on social media.

This is such a bananas turn for even the hypocritical wing on the right to take. For a group devoted to hysterics about taxes and anti-trust being government overreach, controlling companies content and behavior is somehow a mission from on high.

no inspirational Leader in sight on either side.

Okay, so who has ever struck you as an inspirational leader?