People have fast food budgets? To me fast food is like break glass in case of emergency only food. Cooking at home is the way to go and it’s much healthier. And most of the time it’s fun!

This is good advice for young single professionals living in gentrifying or affluent areas in big cities who are ready to move on to quality meals. The meals he makes do look more appetising than the monetary equivalent of McDonalds stuff.

The problem for many poor people (especially minorities) is not that they’re lazy or ignorant about cooking but that they often don’t have time to cook healthy meals like this and that they often live in food deserts where the fresh ingredients aren’t readily available but fast food outlets and convenience stores are plentiful.

Good stuff, but I’m still waiting for the solution for those of us who loathe cooking…

I like the idea, the recipes are nice, but as a man who is made of mostly poverty, some water, and mc-ds I’m wanting to say that videos like these sorta miss the point.

My recipe selection is limited by what can be cooked in the single pan or on the single baking sheet and I have only enough room in my food container for about one meal and some regret.

The prep and cook times are inflated greatly by my lack of ability to mise en place shit anywhere. Having inflated prep/cook/cleanup time matters because time I spend cooking is time I’m not studying, doing odd jobs, or sobbing uncontrollably.

Once again, I like the video, but let’s be aware of how complex the situation can be.

Yes, this guy’s thesis is only correct if you look only at the financial factor and completely ignore the time budget factor.

For people with too little free time, eating fast food can be a better choice for their time budget than spending time shopping and cooking and cleaning.

News flash: for those without a steady 40 hour a week job that pays a living wage and comes with sick days and vacation days and family leave, life is often about your time budget being at war with your financial budget.

I hate these videos. Not the cooking or demonstration, it is the “hey poors! You make shitty decisions, look how mistaken you are, I’m here to enlighten you because I fully understand your situation!”

Yes, if you cook, particularly in batches you will spend fewer of your dollars on food. However, what if you work two jobs and have to choose between using your VERY limited non-work hours to cook and engage in other domestic work like child rearing, getting some extra education etc.

Ever been depressed? How good have you been about cooking regularly and keeping the sink clear of dishes? Depressed and poor with kids and worried you aren’t maintaing cleanliness standards? Suddenly a dish free meal where you scrunch everything up and chuck it in the trash seems pretty rational.

Hell even with the 40 hour week job I still have tons of other stuff that I need to get done. Roll out of work on Friday morning (3rd shift) run some errands and head home to start on some projects. Do I want to spend a half hour making something hot and yummy, not really. Not when I can pickup some Chinese or a burger and be done eating before I’m even half way through fixing my home cooked meal. Plus throw in the fact my “dinner” is usually leftovers anyway, well a man can only eat so many leftovers.

I have been in the situation where i had to make 8 dollars last me almost 2 weeks. Somehow. Thank God i don’t have to do that shit anymore but those were grim times, but it’s doable to make meals on almost no budget.

Buy dry grains and beans, they’re dirt cheap, easy to make, and takes little to make something filling. If you buy them at hispanic or asian market they’re even cheaper. You can get certain fresh vegetables for less than a few dollars that will give food a lot of flavor. The cheapest crappiest cuts of meat are perfect to go along with cooking beans and other grains.

As far as cooking everything, just toss everything in a slow cooker, you don’t even need to get fancy with ingredients, just add salt, water, and whatever. Let it cook for a while.

Also i say all this while i haven’t cooked myself a meal in a long while. I’m in the middle of moving to a new apartment and stressing out about work. Been too stressed to clean and organize the kitchen so i’ve said fuck it and haven’t cooked. I’m hoping to move in a few weeks time and i can’t wait ]:

Also i’d be more than happy to give some guidance on potential recipes on the cheap if need be. I’m hardly a wizard in the kitchen but i can cook decent simple things and would be happy to give some tips depending on what you like. I suppose that’s the sort of thing for a separate thread.

He does assume that there will be TIME for this, and appliances and utensils.

I find that motivation and energy are the biggest hurdle to get me cooking. Not so much time.

I want this guy to re-make this video, after working a full time minimum wage job, picking up 2 kids from school, and then bussing more than an hour away, with said kids, to the grocery story, shopping with “mcdonalds money” for enough food for a family of four, and then take the bus home again, and then cook the meal, take care of the kids, and then leave to go to work again.

Because thats when fast food makes sense. This idea that “poor people” just don’t know how to cook is so privileged and tone deaf its amazing. So offensive.

I can relate, there was a period of about two years where I had to care for my two youngest brothers like they were my kids and I dealt with the same things.

Your bit about having to bus groceries home is so relevant:

I was at a job that gave me scoliosis through repetitive stress (couldn’t afford a lawyer, ended up taking on all healthcare costs myself after they fired me for not coming in and because they love irony) and now grocery shopping and carrying all of that plus the weight of my mental baggage on the crowded bus home is miserable. Of course I’m going to carry a paper sack of two greasy burgers instead. 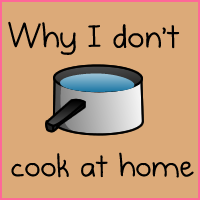 Why I don't cook at home - The Oatmeal

Why I don't cook at home (even though I probably should)

I rather liked the Hand to Mouth SMBC series. Not that I’ve ever been arsed to actually try any of their recipes, but it looks like the sort of thing I could have used in my clueless student days.

“fast food isn’t necessarily cheaper than cooking for yourself.”

Can’t we just file this under no shit Sherlock? My kitchen does not need to make a profit for its shareholders, nor does it go on strike when I fail to pay myself a living wage.

I didn’t own a car for years until march this year, and having easy access to grocery stores is pretty important. Especially when the weather is bad (hot, cold, rainy, etc). I recall having to haul the equivalent of a completely full shopping cart worth of food by myself, and i was embarrassed to take the cart with me so i hauled it all myself. Sometimes i couldnt even afford to take the bus. I’d love for more people to experience that kind of desperation and helplessness themselves.

I’d love for more people to experience that kind of desperation and helplessness themselves.

Who would you wish that on? I’ve been there, and I dream of the day nobody remembers that experience. “Tell us what poverty was, Grampa!”

DC Central Kitchen is an organization that is trying to get rid of food deserts. They are doing great work.

Two books about DC Central Kitchen are in print and available through online booksellers:

Begging for Change: The Dollars and Sense of Making Nonprofits Responsive, Efficient, and Rewarding for All, by Robert Egger (2004).

“In Begging for Change, Robert Egger looks back on his experience and exposes the startling lack of logic, waste, and ineffectiveness he has encountered during his years in the nonprofit sector, and calls for reform of this $800 billion industry from the inside out.”

“The Food Fighters shows how Robert Egger’s innovative approach to combating hunger and creating opportunity has changed lives and why the organization is more relevant today than ever before. It captures the personal and organizational struggles of DC Central Kitchen, offering new insights about what doing good really means and what we expect of those who do it.”

I tell this story a lot; I’m Canadian, I grew up with snowbird grandparents, which meant a lot of winter holidays in a florida trailer park. 10 years ago we recreated that trip. We drove down to Port Orange, stayed in a trailer park, and had xmas. My brother and his family came too. It was silly (and cold) and fun. When we went grocery shopping nearby, I tried and failed to buy broccoli. It was $7 a head. I didn’t buy it. We tried another grocery store a day later. Same thing. $7 broccoli. And again, at a 3rd grocery store. $7. We were in an area with an active trailer park, this was not a “rich” area, mainly working class. But who the hell can afford $7 broccoli?