Turn zucchini into noodles with a veggie peeler

I’ve been doing this for years with a regular veggie twaddler, except I sautee zuke and yellow squash pasta in butter and a little garlic. It’s absolute delicious. The only thing is it feels a little wasteful because you’re left with that inner core of the squash which you’d ordinarily eat.

What? You don’t have a veggie twaddler in your house?

I see things like this and my initial reaction is “DAMN THIS IS AWESOME I HAVE TO TRY IT MYSELF”, and then my other thought is “zucchini is nasty. I know I shouldn’t feel that way, but it is”.

I’ve never been able to find a julienne peeler that doesn’t grind to a halt at the end of each stroke and leave me with a spine to which julienned fingers are still attached (when julienning carrots at least; maybe if you use it on softer foods like courgettes it won’t have this problem)… even when using the julienne version of the famous Swiss Rex peeler, as sold by the legendary Joe Ades, which is otherwise the most elegant and effective peeler out there. 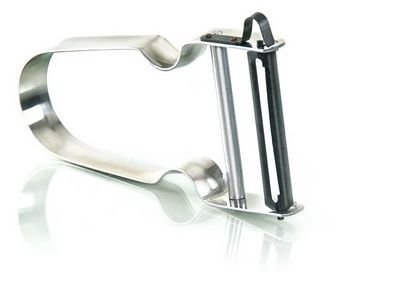 An efficient and easy to use peeler with a metal frame and a hardened swiveling blade fitted across the jaws at the end. Its simple design and unbeatable ergonomic shape makes it the classic par excel ...

Making veggies in the form of noodles may be seen as a heretical attempt to actually substitute pasta with veggies, thus incurring the wrath of FSM. At the very least, you risk a visit from the Spinach Inquisition.

I’ve occasionally substituted them for lasagne noodles. The consistency isn’t as good as the real thing , but it tastes pretty good.

“zucchini is nasty. I know I shouldn’t feel that way, but it is”.

But - “I’m totally with her on brusle sprouts”.

A friend of my husband’s forced him to purchase a gadget that makes these. It works fine, but I wasn’t in love with the result. I’ll try to salting for 30 min trick to see if it’s less slimy.

My wife has a peeler that makes something more like skinny noodles that she uses on the italian squash. She’ll do like half pasta, half squash.
When she drains the real noodles, she throws them immediately back into the pot with the vegetables to cook them a bit rather than sauteing.

Do yourself a favor, buy a mandolin. More utility, quicker and easier to use.

Dedicated to the art of veggie noodles, works great and fast.

I am afraid of my mandolin… its too sharp.

Making veggies in the form of noodles may be seen as a heretical attempt to actually substitute pasta with veggies, thus incurring the wrath of FSM. At the very least, you risk a visit from the Spinach Inquisition.

I occasionally cut myself with the julienne setting bare handed, but never bad. I’ve heard great things about the gloves but just don’t use one myself.

“zucchini is nasty. I know I shouldn’t feel that way, but it is”

But… but… they’re the best vegetable ever!

I was just wondering last night, while stir-frying a courgette, what percentage of people would, like me, rank it as their favourite vegetable.

I sliced a very small area of my fingertip skin (like quarter inch by quarter inch, not super deep) and it was so much pain that I passed out. Not much blood, and kind of a small wound, but it still makes me wince, 10 years on. I was using the guard and everything, but I guess it was slippery, and I slipped.

I LOVE love l.o.v.e the cutting glove, and don’t go near the mandolin without it.

No glove no (mandolin) love