I saw Madonna on Eurovision on Saturday, so this barely even registers as cringe-inducing

Oh, man. I was going to go to bed, but my wife kept saying “c’mon, you’re not even going to stay up long enough to see Madonna?” So I did. Then, when Madonna was done, I got up, and she looked over and said “Sorry. Good night.” And that was all that needed to be said.

As someone who trained in Iron Palm this may be the most cringe inducing demonstration I’ve ever seen. A lot people think that much of kung fu is tv/movie fakery and this idiot is not helping the cause.

I mean, some of it is movie magic, but most people would be surprised at how much of it is actually real.

Fellow martial artist here. When we had to learn breaking techniques (both wood and brick) we were responsible for providing our own, mostly so it was on our expense. I had no idea at the time that some people will “embrittle” their targets beforehand through a variety of techniques - I just naively bought board and brick of the right variety and dimensions, and had to smash it legitimately.

There’s a lot of nonsense like this out there that tarnishes those who actually apply themselves. Shortcuts to glory that bypass real achievement; quicker, easier, more seductive. May their trophies be as ash in their mouths, and all anthems ring hollow.

Also: be careful trying it at home - it does take physical training to be able to absorb the forces generated - mind over matter only gets you so far, depending on the density and tensile strength of said matter. To whit: https://www.youtube.com/watch?v=DjvgjrbIZdw

What would improve this video is if the master looked at the host, said ‘Boot to head’ & then WHAM!

Yeah, I saw a very experienced student break his hand on one of these once. All we would do to prepare the cinder blocks was soak them in water for a few hours so gravel didn’t fly everywhere. I doubt it did anything to soften them. It sure didn’t help him at all.

Not the only talk show host to kick ass.

Anybody remember this guy from the comic book ads back in the day? 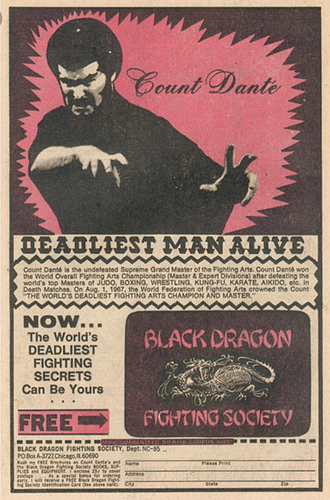 This was my thought on why this segment continued. This was pure KAYFABE on both their parts. The brick breaking thing was revealed as a fraud, but he is standing next to a guy who teaches martial arts for a living.

If the next line was “this looked like a fraud, prove to me you are a martial arts master”, then stuff would’ve gone down like a Jerry Springer episode.

a guy who teaches martial arts for a living

Those who can’t do, teach…

This is the thing I don’t understand… breaking boards is easy, breaking bricks is relatively easy.

Why on earth would you fake it on TV?

(OK, that video of breaking only the middle brick was funny and doing that for real would be hard.)

What did she do?

Our far right government was falling apart in the most hilarious way at the time so no one gave a shit about the song contest anymore.

Those who can’t do, teach…

Nothing against you in specific, but I hate that phrase with a passion.

It’s the opposite of the truth. In order to teach well, you have to know something so well, and know it in so many different ways, it goes way beyond simply do.

It’s the opposite of the truth. In order to teach well, you have to know something so well, and know it in so many different ways, it goes way beyond simply do.

Yeah, I always thought the same, probably coined by some dunce in Roman times!