Kudos to Rod for going out on that limb & giving us all a show for the ages.

As an aside, it was jarring to see the casual smoking on TV & be reminded of how pervasive it was is in those days. You half expected a Mad Men-ish tumbler of rye whiskey to appear in their hands. Stephen King captured and called out the mixture of idealism & warped late-50’s atmospherics perfectly in “11/22/63”.

Thanks. Serling was a true craftsman and man of principle. I do wonder if he was being genuine here when he said he wasn’t going to address controversial issues on “Twilight Zone.” Maybe the show’s success allowed him the latitude, or maybe he was planning it all along.

It’s a great interview. And were are we today with censorship? Does anyone think censorship and pre-censorship still exists. If so, can you chime in so we can create a list. I’m totally sincere in asking. What issues or subjects do you think are subject to censorship or worse, pre-censorship?

I’m not a TV writer so maybe I’m not in a position to say (maybe no one on BBS is?) but, from what I gather from my colleagues who are, it’s more or less the same today as it was then. The sensibilities evolved a bit but you’re still dealing with a world where a crime drama feels the need to demonize #blacklivesmatter protestors and misogyny can only be addressed in its most blatant forms.

Trans women are still jokes who are really men in drag. Bi people don’t exist or are selfish or can’t make up their mind.

The government may have loosened its grip somewhat but the advertisers are just as conservative as they ever were.

(Things have improved but more slowly than the rest of southern US culture. To the point where my mom is more accepting of trans women than the average American TV show. A net loss to borrow economic terms.)

Note: I read your post in a friendly tone and I meant to reply in the same tone. I’m not sure I succeeded.

I disagree. While there’s still a very long way to go, I think such matters have indeed improved in 50 years. In recent years I worked on two different mainstream network TV shows with episodes dealing with trans characters. In one instance (a comedy), the character was someone our antihero hated in high school, but then unwittingly finds himself attracted to when he meets the “new” her at their reunion, not recognizing her as his old nemesis. The story was reasonably well handled, with the comedy not stemming from juvenile transphobic panic, but more from our antihero’s assholery and mistaken expectations that nobody else would grow and change since high school just because he himself hasn’t, and as originally written, both characters part as slightly more than friends. Unexpectedly, the studio and network insisted this guest character be played by an actual trans actor, which stumped the writers since they had someone very specific in mind for the role who didn’t happen to be trans. In the end, the character was totally rewritten. But I was amazed to find myself siding with the suits in this argument.

On another show (The Mentalist), we had an episode involving a troupe of drag queens. At first we’re led to believe that they’ve witnessed a murder, then we suspect that they know more than they’re letting on, and by the end we discover that they’ve performed an act of incredible compassion and heroism, at great personal risk, and for a CBS procedural it’s a remarkably humane and affecting hour of television. And the network loved it.

Neither of these scenarios would have enjoyed this level of support from the suits fifteen years ago.

A wonderful interview. They dont make them like this anymore. A man who had something to say and write with real life experience to back it up. Purple Heart disabled explosives vet and yet not a word mentioned about that.

Rod Serling was also far more of a badass than he let on.

During WWII he was in an Airborne unit and later a Demolition serving in the Philippines, including its most savage battle, to liberate Manilla (with urban fighting considered comparable to Stalingrad). 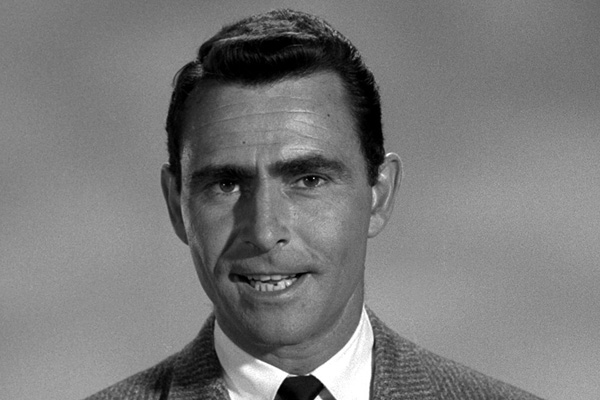 "There are weapons that are simply thoughts, ideas, prejudices, to be found only in the minds of men."

The kind of earnest humanism one sees in people like Serling is a rare thing in an age of irony.

I absolutely love the way that man used language.

These guys smoke! both are madly puffing away on their cigarettes so much you hardly can see them: the camera are angled to shoot through their smoke plumes. And Serling, if you notice, actually is holding a stogie in the beginning-- so when you see him with a cigarette, he’s really just “taking a break” from his cigars. That was the '50s!

Oh, and so the South really didn’t like puppies in those days, did they?

Be sure and check out the other interviews. All kinds of good stuff.

The fact that trans women are still jokes reminded me of a 1985 episode of Night Court called “Best of Friends” in which an old college buddy of the show’s lothario Dan Fielding shows up and Dan is shocked to learn his buddy is a post-op transgender person now living as a woman.

It was my first exposure to trans people. I’ve never seen it again and there were probably “guy in a dress” jokes but what I remember most was how sympathetic the woman was and an emotional statement she made about how miserable she’d been as a man and how frightened she’d been that someone would find out her secret.

It still amazes me to think that was broadcast in 1985, but what’s also depressing is that it would be decades before I’d see such a positive portrayal of trans people on TV again. Things might have changed a little less slowly if other shows had followed that example, but I bet the episode didn’t go over very well. In a lot of places it still wouldn’t–especially the South.

There are a few sparse cases. Twin Peaks had a comparatively positive portrayal of one gender non-conformist (played by David Duchovny) and Bones had an episode with a trans woman who had been a pastor before she was murdered and that episode was very positive. A few others were mentioned above.

But yeah, the cases where the episodes are positive are slim compared to the ones where trans women are a punch line.

And it’s not just trans issues. Disability and racism are two other issues that TV and media tend to be behind the curve on. For reasons of advertisers and execs as far as I can tell.

In UK television, Hayley Cropper was a positive portrayal for 16 years, and it didn’t hurt Cadbury (My memory says they were the Coronation Street sponsor at the time). Hayley Cropper (also Harold Patterson and Hayley Patterson) was a fictional character from the British ITV soap opera, Coronation Street, played by Julie Hesmondhalgh. The character first appeared in the episode first broadcast on 26 January 1998. Hayley was the first transgender character in a British soap opera and was the first permanent transgender character in the world of serialised drama. She is perhaps best known for her marriage to Roy Cropper (David Neilson). Hesmondhalgh won numerous a...

Julie Hesmondhalgh is cisgender, but she is also a vocal trans ally.

Really great interview. I always assumed he would only talk that way on the show, but that’s his real voice! He reminds me of William S. Burroughs in that his cadence and tone is utterly unique.