I don’t know if it’s my Pihole or what, but I couldn’t get this video to load on the page. If anyone else has that problem, I found it here by pulling it out of the source code:

For the BB Admins, the code I was seeing was in a FIGURE tag with a class “wp-block-embed” if that helps?

I think the only album I would have a chance with is the rocky horror cast recording… can I please stop working and record that right now?

Do we get to have a set list to work from? I think I’d be close with Yankee Hotel Foxtrot, but I’m sure I’d forget a song somewhere along the way without the titles to work from.

A set list is only fair. the pros get them 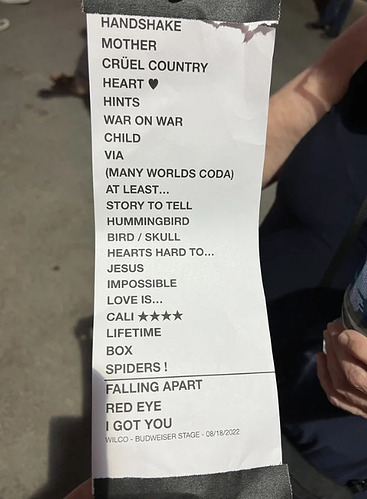 I bet I could do it with the first Ramones LP, but those songs are really basic and short.

The problem is that when I’ve listened to an album so much that I know it inside-and-out, I get burned out and then stop listening to it completely, so I haven’t actually listened to that album in years. There are probably several albums where I once knew every line (Public Enemy, Velvet Underground) but because I got burned out I’ve now mostly forgotten them.

Oh, for me that’s easy: Kate Bush Never for Ever.

Nobody wants to hear me sing that. Nobody.

For me it would be (from experience)
“rocky horror cast recording” 100%. For some reason that is the only music I can sing almost in tune.

Great, our cast is coming together!!!

I bet the ones you’re burned out on are still in there somewhere. Just need an opening line to get you going

Nobody wants to hear me sing that. Nobody.

To be fair, there’s a really really short list of people who can pull off Kate Bush Karaoke.

Back in my garage band days, I had a weird useless gift: I was the guy in the band who knew all the lyrics to all the songs. And I had the worst singing voice in the band, by far. Less than single-octave range, less-than-confident pitching, and trouble hearing myself.