If we don’t test for covid-19 it doesn’t count, right?

To be fair, the US has at least 5 times the population of Italy, but yeah, if we beat out China and India, not a good sign… 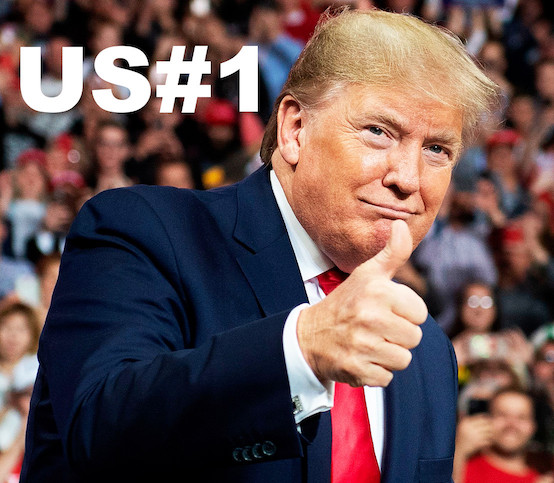 A few weeks back, I commented on a thread noting Italy’s death rate reaching almost 1000 every 48 hours, and how unthinkable that was.

Now the US is experiencing over 2000 deaths every day.

My horror was quaint, in retrospect.

If we don’t test for covid-19 it doesn’t count, right?

Yep, if by that you mean “doesn’t get counted.”

I believe that’s Turkmenistan’s unofficial new motto. The official motto doesn’t include any mention of the disease or its viral agent.

Finally! I was like, “Dang, how is it possible that we can’t get ahead of Italy???”

In all seriousness, this is now the leading daily cause of death in the United States. My daughter’s best friend shows symptoms, and her mother has tested positive and is in bad shape. We aren’t freaking out, because we haven’t been letting ourselves think about it.

We’ve got the advantage (if you can call it that) of a huge population, a president who is doing everything he can to downplay the problem, and loads and loads of stupid and/or selfish citizens who wouldn’t try to help no matter who was president. The U.S. will always be a top contender when it comes to being awful in any respect, but when it comes to coronavirus in particular, we’re uniquely suited to be the king of death and suffering.

EDIT: Oops, almost forgot the poverty that forces people to keep working even in non-essential jobs, and the lack of universal health care that actual civilized countries have had for decades but we will never, ever figure out. U.S.A.! U.S.A.!

You’re doin’ a heck of a job, Trumpy!

nah only 15 cases, soon 5, will disappear with the warm weather 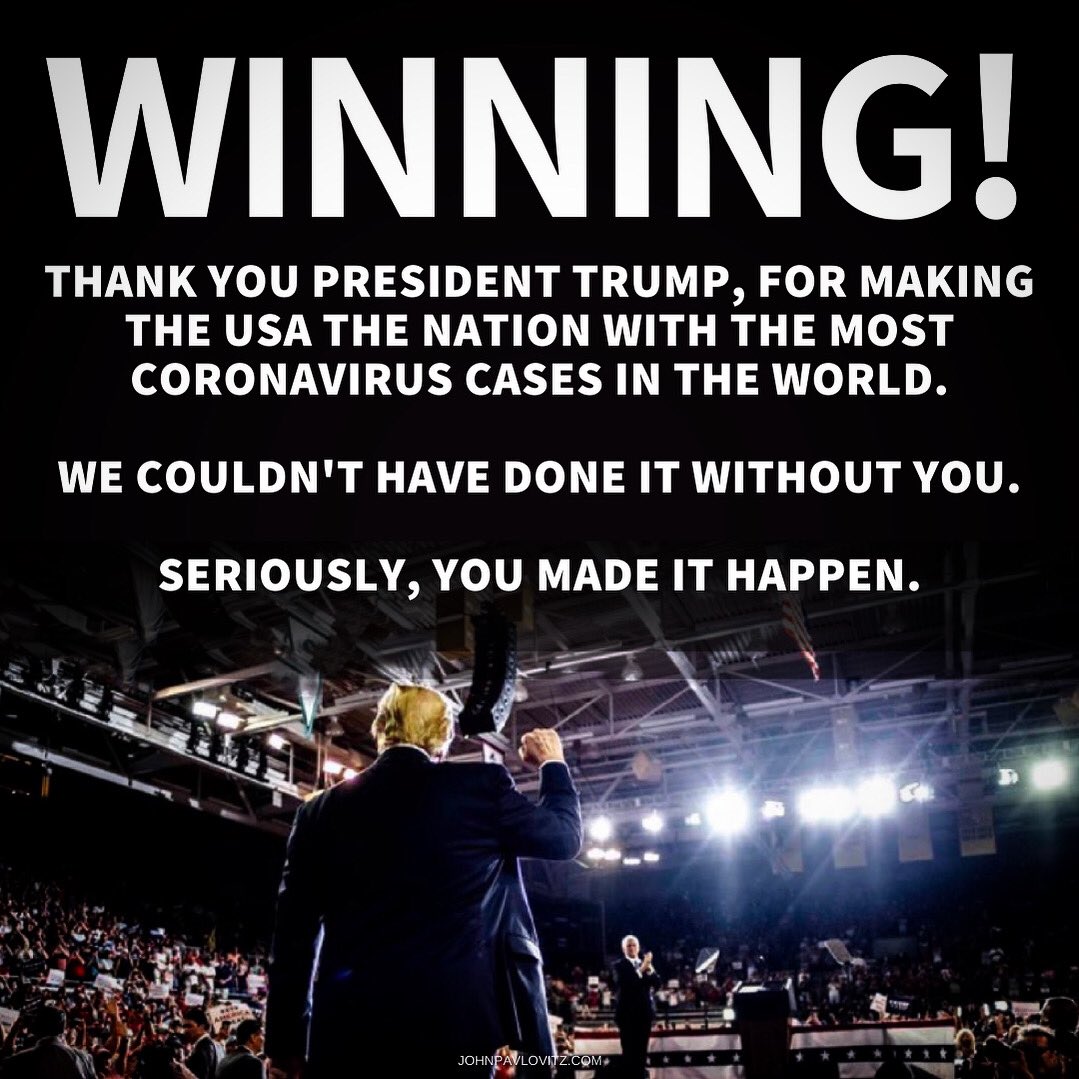 Fwiw, I think the fairer comparison is US to all of Europe, or all of Western Europe at least.

Where we are versus China & India is not so great, tho… (To the extent that one can believe official Chinese counts. Though one can make the same point about official American counts too.)

We have 7 states with no stay at home orders at all. All of them are solidly “red” states and hover at the bottom of education, healthcare and quality of life stats.

What the fuck, people!!! 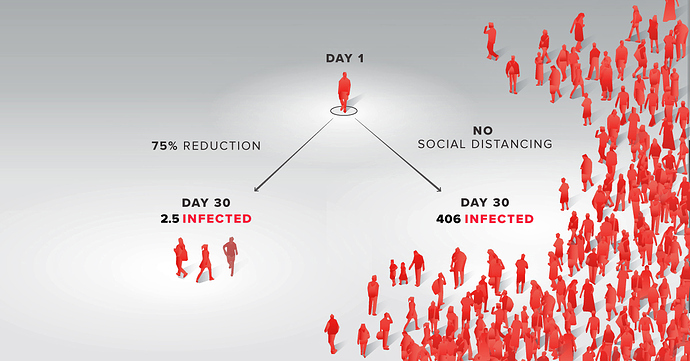 The Math Behind Social Distancing

Social distancing has been the first line of defense against COVID-19. We look at the math and science behind social distancing, to show how it works.

The US went whizzing past China about … a week ago?

Edit: even if China is only reporting 25% of COVID deaths, and the US number is completely accurate, the US still has a higher toll.

Edit2: going back through the WHO SitReps, the US overtook China somewhere around 1st or 2nd Apr.

Where we are versus China & India is not so great, tho… (To the extent that one can believe official Chinese counts. Though one can make the same point about official American counts too.)

We can’t ever know the “real facts,” but we have to keep living in the world.

We’re strangers discussing news stories. We don’t know if the numbers in the stories are correct. In fact, basically we know that some of them must be wrong—how likely is it that nobody anywhere in the chain of custody made a mistake—but as sensible people trying to have a sensible conversation, we have to assume that most of the stories are mostly correct or else there’s nothing to talk about.

Per capita, the USA has 35 times as many deaths as Australia. Take out New York (because it has an unrepresentative population density) and its still 20 times higher.

What the fuck, people!!!

That link you offered: “The Math Behind Social Distancing”

It’s both the problem and the explananation.

There is a significant minority of the population, primarily residing in “solidly red” states, that no longer recognize data, math, facts, evidence, logic, or ultimately anything that could possibly lead to a conclusion other than that dictated by their high priests.

They won’t change their minds, ever.

We will need to drag them, kicking and screaming, back into the light that nominally was shed on all during the Age of Enlightenment.

Progress is a noisy beast, and we need to keep fighting the battles we (think) won 5, or 25, or 125 years ago. Because if we can’t/won’t re-fight those battles, the forces of ignorance, fear, and hate will win.

Because those forces and impulses NEVER go away. 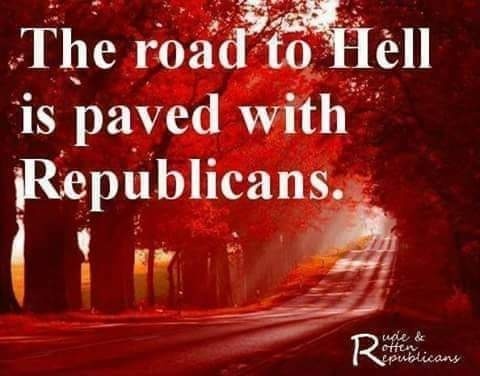 We don’t have to build the road to hell, we can stack the bodies in any direction we want and make the country a better place…

Per capita America is still way behind Italy. At least according to this article, and according to what we know of the diagnosed cases: 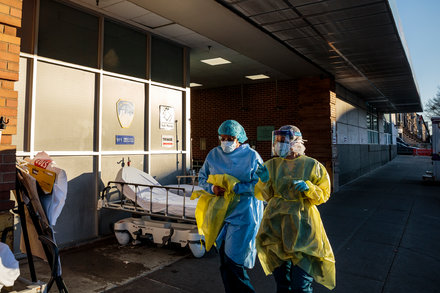 For the first time, the government has declared all 50 states a major disaster for the same event. Some pastors plan to hold Easter services despite stay-at-home guidance.