This looks way nicer than the ugly, oversized camera straps I remember. They were the black socks with shorts and sandals of camera straps…

Ah, that black strap looks pretty tasteful to me, relatively speaking. OK, so maybe the new one you posted is a bit more hideous than I first thought, as if someone mugged the stereotype of serape-wearing Mexican and cut up his clothes for camera straps.

This is the hideous, cheap, vintage kind I was thinking of:

The kind camera stores would up sell as part of a deluxe 11 piece accessory kit (or some such), along with a cheap, really cheap, blower brush.

When I bought my first Canon 35mm, my dad suggested two accessories: a UV filter and an ugly Navajo-looking camera strap. I used both proudly all through college.

My best camera strap ever, is very much like this. The only difference, besides the pattern, was that the wide portion has a slight crescent curve to it. That makes it lie perfectly flat when its around your neck, or slung over one shoulder.

Well I think it’s pretty nice, but I don’t have a camera. Do I recall guitar straps being repurposed into camera straps, or did I dream that?

I don’t know for sure but I have seen / been partial owner to at least three guitar straps with similarly painful motifs. I wouldn’t intentionally buy one for my guitars but I am kinda tempted to get one for my camera.

Your pain is my joy.

Carry an SLR around your neck for a while and you’ll begin to see the advantages of a wide strap.

I used to wear 35mm SLR cameras when I freelanced. (I also had a darkroom, black and white processing/printing only.) I had a lot of cameras including several Nikkormat ELs in varying stages of functionality. Wearing any camera all day is a pain in the neck. Wearing several with different film speeds was even more of a pain.

This was the only thing that made it bearable: 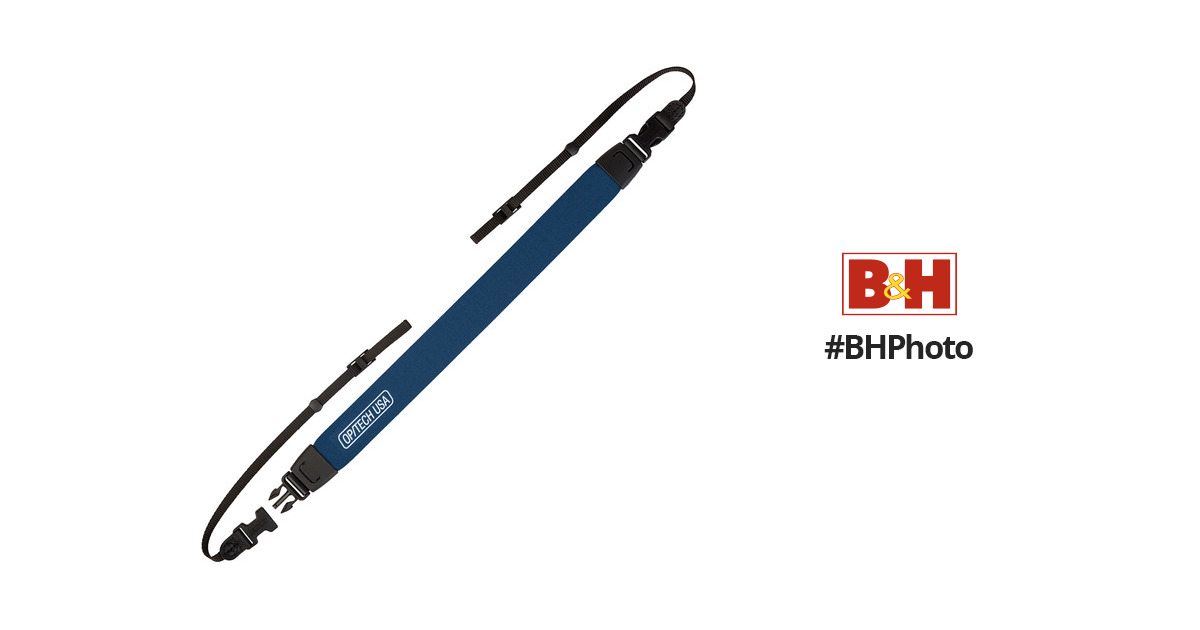 Those solid, plain, simple neoprene straps felt like the cameras weighed half as much by the end of a long work day. Try to get the straps that have as much length of neoprene as possible, in case you have to move the camera you’re wearing to a weird position: you’ll still be covered (in neoprene strap). Unseamed, preferably. After 6 or 8 hours of wearing a neoprene that had stitched edges, I chafed even though I wore a collared shirt. The ones with the nylon strap sewn on the outside face of the strap totally defeat the purpose of the neoprene. Don’t bother with those.

I know of steel-cable (very very thin, sewn in nonobviously) reinforced camera straps meant to thwart thieves known to cut cameras off of tourists on trains, buses and other opportunistic crime areas. I had a camera bag by PacSafe that used the same approach. I can’t find the exact model but it looked kinda like this. In the end I went with waist packs because it was faster to change lenses out of, and my neck needed a lighter load to carry.

Since we’re focusing on ugly straps, here are some loud flashy ones in neoprene:

I always chose black straps because they essentially disappeared from view when paired with a black t-shirt or black workshirt. It was pretty hard to tell I was wearing a camera unless you were standing near me and I only shot using available light. Only drawback was on hot days where I couldn’t find shade, I felt really hot. Even the cameras got hot. I had wee cooler stocked with ice packs to keep film in and it was nice to sit on while I felt like I was melting.