The DUP bit is kind of killing my buzz right now. 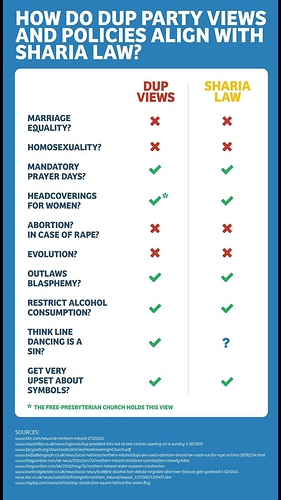 EDIT: Sharia law seem to leave some opening for abortions under the ‘lesser or two evils’ principle.

On the plus side, I hear that the DUP will want a “soft” Brexit, which is something of an improvement on the previous political landscape.

It’s time for the opposition parties to start labelling the Tory/DUP linkup as ‘a Coalition of Chaos’ - throw the Tories words back in their faces.

And the press really has to turn its attention on the DUP’s regressive policies and show the mainland what sort of people the Tories have shacked up with. The Conservatives said that if Labour won, policies would be dictated by Nicola Sturgeon in Edinburgh. Now we have government policies being run by homophobic, anti-abortion, fundamentalist bigots in Belfast.

The Tories may have a majority of seats in coalition with the DUP, but their 42.4% of the vote plus DUP’s 0.9% is really not the mandate May was looking for.

From what I’ve read, that’s mostly on the specific issue of retaining an open border with Ireland. When it comes to immigration limits and single market access, I’m not optimistic that they’ll get or even just seek major concessions. It also makes it more doubtful whether such a shaky majority can get the final agreement ratified in parliament, and a failure would mean a totally uncushioned Brexit.

It’s nice to see the Tories humiliated, but at the end of the day they’re still in power, and – thanks to a devil’s bargain with the DUP – free to carry on slowly wrecking the country. The fact that they will have to throw the DUP a bone or two in exchange for their support is not going to benefit anyone much either.

All this election has done – aside from waste even more money and time – is expose still further the farcical claim that Theresa May has a ‘mandate’ for her Brexit insanity. Brexit’s going to happen anyway, because whoever it is who currently has their fingers sunk in the twitching brain of the lumbering monster called the Conservative establishment has decided that it must. Only now Brexit is going to be even more of a clusterfuck, because everyone near and far can see that the emperor is, while not exactly naked, at best only dressed in a motheaten mankini covered with fake rhinestones.

The fact that younger voters are energized and ready to reject the neo-liberal hellscape that the Tories have planned for them is a crumb of comfort. But I’m sure that the Labour party – with its proven talent for snatching defeat from the jaws of victory – will manage to spend the next however-many-years-until-the-next-election busily eating itself in futile internal squabbles, so as to ensure that they remain firmly unelectable next time around.

Austerity all the time with an scoop of facism on top- I weep for what remains of Britain.

The silver lining, i guess, is that the DUP has the example of the LibDems as a warning - they know that the tories cannot be trusted to follow through with their promised concessions to a coalition partner. Which greatly decreases the liklihood that May is going to be able to pretend she has a majority like her predecessors did a while back.

Sooner or later the DUP will demand something that the Tory backbenchers who have some shrivelled remains of a conscience won’t stand for. I would be very surprised if May manages to hold the coalition together for a full 4-5 years.

OTOH, there are several Tories that might rebel against a hard brexit. More so now that the brexit mandate election was so roundly rejected. Queen May can’t afford very many rebels at the moment.

But there’s even more that would rebel against a soft Brexit, the hard version is still party orthodoxy despite the election result. If she’s brought down by either wing, the next in line would probably be an outright Brexiteer like Boris.

Right, but there’s the rest of parliament to support a soft brexit.

Right, but there’s the rest of parliament to support a soft brexit.

Basically what Corbyn needs to do is to persuade Sinn Féin to take their seats in Parliament. At that point a handful of pro-EU Conservative MPs will control EU policy. 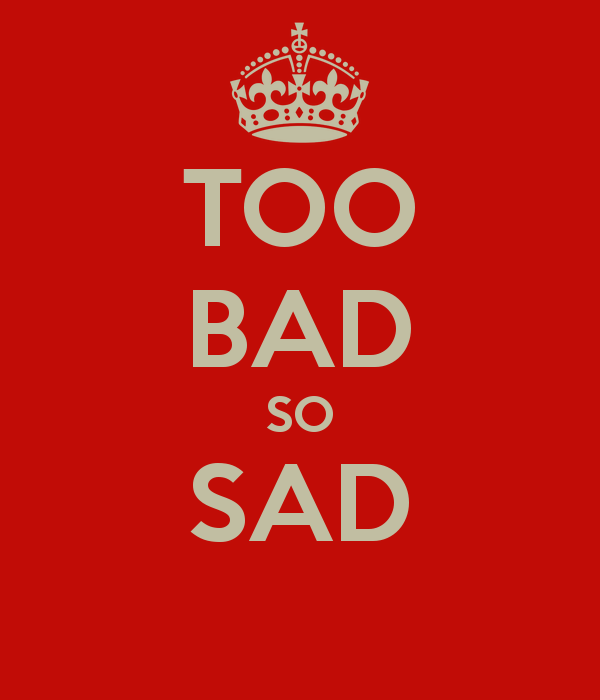 It’s nice to see the Tories humiliated, but at the end of the day they’re still in power

Much less power than they had yesterday, and massively less than they (and practically everyone else) expected when they called the election. What power they retain is based on very delicate alliances; a few defections (or byelections) can bring down the whole house of cards, and there is a very wide political gulf between the DUP and many Tories. “Make no mistake” (as she would say), this is a big loss for her party. It is an even bigger loss for May; nobody but May herself thinks she will survive more than a couple of months, and she’ll be spending most of her working hours fending off plots not from Labour, but from her own party members.

It is May’s delusion about her own electability and her unwilling to listen to anybody else that did it, so it’s SOP.

Not all Conservative MPs are evil, so this is going to get interesting.

[and it’s started already - one of the sensible Conservative MPs, Sarah Wollaston, has called for May to go, citing pro-fox hunting and attacks on social services as examples of her being out of touch.]
[second sensible Con MP - for South Cambs - says she’ll have to go in six months. Given what the ministers are like, she could be as much as 6 months out. Let’s say between Saturday and 6 months.]

So, how much of a shocker was this? Is this another nail solidly in the coffin of advance polling? Will the children of the village stare at us in wide-eyed disbelief as we regale them with tales of a bygone era of predictable outcomes?

The hung parliament was bravely called a week ago by YouGov. Their prediction wasn’t perfect but it was close - that poll has the distinction of being significantly bigger than any others so it seems it is possible poll accurately, it just cost lots of money.

Imagine how much better Labor would have done if the party was actually supporting and not trying to sabotage Corbyn for the last year.

It’s what, 2 weeks until the start of the Brexit negotiations? This will be better than I Clavdivs.

[quote=“Jorpho, post:16, topic:102431”]
So, how much of a shocker was this?[/quote]
The turnaround was surprisingly fast, but the polls were not far off. There was no way to predict the 2% rise in turnout, probably mainly young people supporting Corbyn. (There was also no way polls could predict the Maybot’s meltdown in the days before the election.)

Imagine how much better Labor would have done if the party was actually supporting and not trying to sabotage Corbyn for the last year.

And Scottish Labour had got rid of their Blairite leader and got behind Corbyn, which would have left May without an overall majority even including the DUP.