Funny AND informative. I didn’t always know the “first knuckle” rule, but I always knew that if you were draining your rice in a colander that you have screwed up horribly!

My wife showed me this a week or so ago, it’s hilarious.

But seriously, if you make rice get a rice cooker. Get an inexpensive digital one that is of mid-range capacity and price (like 8-cups). Aroma makes one that has done right by me for 10 years, I think I paid around $40 for it.

A lot of this reminds me of the bad cooking shows presented by apparently incompetent hosts. Like one where the host used juice from pickled jalapenos and replaced what she took with water to keep the jalapenos covered. Which seems like a bad idea when the vinegar brine is what preserves the pickled.

I usually avoid cooking shows, but this was great! Yeah, I winced at the same points because if you start rice with too much water at the beginning, it’s never gonna be right. I LOLed at his takes on the crazy cookware/utensil choices, too. One thing he missed was that oil, though. What oil did she use? That makes a difference in the finished product, and seconded on the MSG.

There’s no way that the rice she added to the final dish was the same rice she rinsed in the colander. It looked well cooked, with nice separate and firm grains. They must have remade it for the final step. Or maybe ordered it from a restaurant.

My GF is Filipino and agreed with his dismay at not washing the rice first, and then draining and washing the rice. “If you have that much water you goofed up and should just remake it.” Said the knuckle method was legit. Learned something new.

Doubly so if using a colander. Rice will go through the holes in a colander. It’s bad enough it needs draining with a sieve!

Pst… use yesterdays rice for fried rice every time.

I saw part of this video on Twitter when it came out and thought, yeah funny, but seriously, who the fuck cooks rice this way?

It’s interesting in that she knew better, but was constrained by the “BBC method” of rice cooking. They kept going on about how different cultures cook rice differently. So the question remains: who the hell actually cooks rice this way? White people who don’t know any better? I can’t imagine that it has good results, nor that anyone who eats rice as part of their culture would do this. Seems like less a cultural difference and more a “people doing it wrong” difference.

It looked well cooked, with nice separate and firm grains.

Yeah, that doesn’t seem possible with that method. But since she doesn’t cook rice that way herself, it does raise the possibility she followed the BBC recipe and showed the wrong way of doing it, but then perversely did it right for the actual cooking purposes.

The method in the video is terrible, but I’m sure my method would also earn the ire of someone who is sure that there is one true way to cook rice.

Great to see Uncle Roger’s insights getting their due!

Btw, some things were already said by BBSers about his rice rant here:

I hope you didn’t learn how from the BBC! [Uncle Roger DISGUSTED by this Egg Fried Rice Video (BBC Food)]

Doubly so if using a colander. Rice will go through the holes in a colander. It’s bad enough it needs draining with a sieve!

It rather depends on both the size of the colander and rice.

I would assume Asian people cook fried rice with a steel pan…but hey I use Scanpan non-stick which is metal utensil safe.

I have read that you can cook rice like pasta and then drain it. To be honest she only cooked the rice for 10 mins, which means that is likely not done to the point of mushy water logged. My issue here is that even if the rice turned out half way okay you’d still need 15-30 mins to drain a majority off the water out of it. If you went straight from the rinse to the pan it’s just going to make a soggy mess.
(You know because 99.9% of home kitchens don’t have an insanely high output gas burner like the local Chinese restaurant uses.) Also why does she pre-cook the egg? Has she never been to a Hibachi restaurant?

Whenever I do fried rice I use frozen rice (thawed) I have made previously. It’s something about the freezing that causes the starch to change and it doesn’t get sticky and clumpy. I use my Instant-Pot now for rice cooking, but before that I just did the pot on stove method, about 20 mins low and then let rest.

I know of no colander that does not have holes much larger than any grain of rice. If it doesn’t, it’s pretty sure to be a sieve. 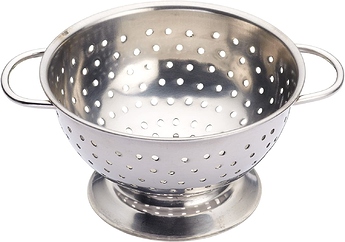 I’ve seen many things designated colander that aren’t, as far as I’m concerned.

Some restaurants cook rice like pasta, boil in lots of water until it’s exactly how you want it, then drain it in a strainer, and lay it on oiled sheet pans to cool. It may not be traditional but you can make rice exactly how you want it. Also there are as many levels of done-ness as there are types of rice. While I love sticky sushi rice, I’m not going to make that at home because I never make sushi at home. I prefer the longest grain basmati rice because it has the lowest glycemic index. I prefer rice that is not overcooked, i.e. if your rice grains have split, it’s overcooked. Maybe you like it overcooked? Go for it. I like it just cooked without splitting, then cooled overnight in the fridge and reheated. It’s more al dente and doesn’t get mushy. It also has the most undigestible starch and lower glycemic index.

Rice cookers: if you make rice every day, sure get a rice cooker. Or get an Instant Pot type cooker and have a multi-use appliance. If you are cooking in a rice cooker, after rinsing the rice well, put the rice and water in the cooker and let it sit at least an hour before starting it. Also add some fat like coconut oil. You’ll get perfectly cooked rice that won’t split and be mushy. In the Instant Pot I do this:
Heat cooker on sauté for a minute or two. Add some oil like coconut or my favorite, ghee. When it’s hot add your dry rice and sauté the rice for 3-5 minutes stirring constantly to cook off all the starch you were going to rinse off in the traditional method. Shut off the IP and give it a minute to cool. Add cold water in a 1:1 ratio (pressure cookers don’t lose water during cooking so extra is not needed). Set the IP to high pressure for 8 minutes for well cooked but not mushy rice. Let the IP do a natural pressure release (make sure the “keep warm” setting is off for this). Enjoy rice that you didn’t have to rinse, and is perfect every time.

Full disclosure: I like my rice and pasta al dente and my veggies, such as broccoli and carrots, overcooked to the point of being very soft. LOL

In the Instant Pot I do this:

Thanks. We bought one because my wife thought it would be good as a multi-purpose rice-cooker but it has only made AWFUL rice and so gathers dust (she doesn’t trust it for anything else now).

@anothernewbbaccount wait, are you using the “No True Colander” fallacy? 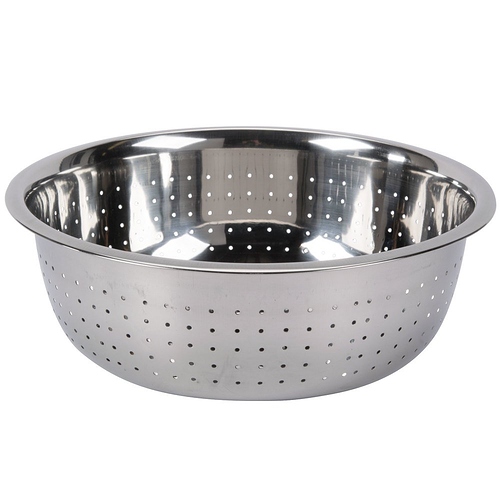 This 5.5 qt. Chinese colander is one kitchen supply you don't want to go without! It is ideal for draining all types of pasta, washing fruits and vegetables, and even straining soups and stews. Unlike a regular colander, this Chinese style colander...

Are you using the IP on the rice setting? I have found that the settings on the IP are pretty much useless and took the advice people gave when I bought it: throw out the manual and go online for tested recipes. If you haven’t tried it, try the sauté and pressure cook method at least once. If you normally add coconut milk to your rice, don’t substitute it for water, add it to the normal 1:1 water or it will burn. Even in the rice cookers I found that I could add a lot of coconut milk on top of the normal amount of water and it wouldn’t be too wet.

That looks like a colander to me. I just had a thought…
More metal than holes = colander
More hole than metal = sieve
Not sure if this works definitively - it’s a hypothesis, though.

hmmm…
I think:
mesh = sieve?
holes punched in sheet metal = colander?
strainer could be anything that holds back solids while draining liquid?