US Pledge of Allegiance in Arabic leads school to apologise

Personally, I find asking (requiring?) children to recite the Pledge of Allegiance in any language offensive, but I somehow doubt that’s what this was about. 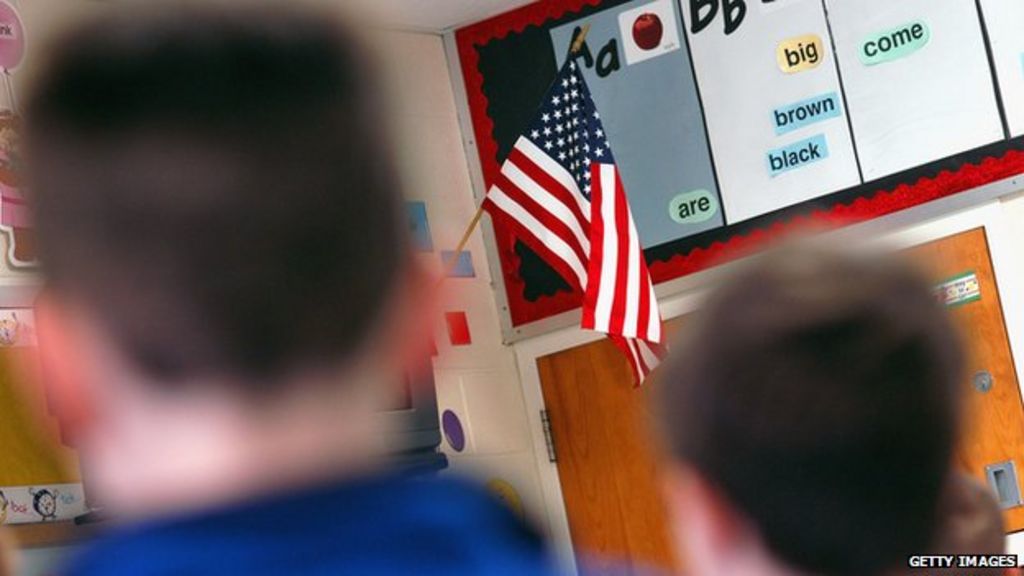 US school sorry for Arabic pledge

A school in New York state apologises after an uproar was caused by students reciting the US Pledge of Allegiance in Arabic.

I’d be interested to read some rationalizations of why Arabic is a problematic language, but I am not surprised that all we get from the BBC is allusions. I follow BBC news on a daily basis, and they seem to push an anti-Middle East agenda quite fervently.

But I agree, it would seem obvious that any “allegiance” which is not given freely is not allegiance of any kind.

I wonder if anyone every tried explaining to the neocons that if Jesus ever said the Pledge of Allegiance it would sound much more like modern-day Arabic than modern-day English.

This article is somewhat better:
Upstate N.Y. School Apologizes For Reciting Pledge Of Allegiance In Arabic

A school in upstate New York has apologized for reciting the Pledge of Allegiance in Arabic after getting complaints from district residents who lost family members in the war in Afghanistan.

To many, the Arabic Pledge of Allegiance seemed “un-American.” Patriotism, for them, is a narrow highway.

“I think it should be spoken in English. This is America,” resident Joyce Larsen said.

“The intention was to promote the fact that those who speak a language other than English still pledge to salute this great country,” the district said in its statement.

“Had it been done in Spanish first or Japanese first, we wouldn’t be having this conversation today,” Principal Aaron Hopmayer told Young.

So, pretty much straight-up racism and nationalism.

It would have been interesting to do the pledge in, say Aramaic, ‘accidentally’ say it was Arabic, and see what the response was.

I’m a little embarrassed I had to check, but according to Wikipedia, the official languages of Afghanistan are Pashto and Dari, and Arabic is a minority language.

I’ve got a very “conservative” relative (he doesn’t really conserve anything) who is stupidly Christian (thinks it teaches history) and fervently anti-Middle Eastern as well. What I love doing to shut down the shite proselytizing is, whenever he proudly props up “Christian values” as some great Merkun asset, I deflate it with “Oh… Isn’t that that Middle Eastern thing?”. It’s funny, this shuts him up real fast, and gets him to think, if only for a moment. I know - Christianity and Islam are really Near Eastern, but these are people who assume that “near east” means Europe east of Italy.

Arabic is a minority language.

If that. It’s liturgical, and not used in conversation. I met a few Afghans in my years in the Middle East. They often spoke better English than Arabic. This is part of what’s ridiculous. You also stopped short of including Jewish parents who were also part of the backlash in your quote of the article. (Not saying you did it deliberately somehow, that’s just literally where you ended the quote.) My Jewish girlfriend’s response to that segment was pretty much, “Seriously? WTF, Jews?!” I for one tend to expect better of that population myself, having seen them come to the defense of Arab/Muslim populations in the US many times before.

Obviously it’s ridiculous on many levels, it being Language Week adds another layer of ridiculousness. Some days, I think being an Arab in America isn’t so bad, and other days I’m reminded that pretty much half the population can’t tolerate hearing a few words in Arabic without losing their shit. I love how some are hiding their bigotry behind, “Speak English!” A dog whistle that couldn’t be any louder.

Not only is the Merkin reaction to actual Arab and Islamic culture (often perceived to be the same thing) something of a headscratcher - the deliberate ignorance of culture put forth as “offensive” encourages problematic associations with other cultures as well. Such as with FoolishOwl’s post about Pashto and Dari - I doubt they would be well-received either.

For example, I had static at a workplace when it had become apparent that people had searched through my bags in my office and found Yogic books in Sanskrit, because it was “close enough” to Islam - which might be extremely funny and perplexing to anybody who knows a bit about either. Since people couldn’t come out and confront me with what was blatant (as well as incorrect) religious bigotry, it instead manifested as a messy eggshell dance of innuendo and bullshit, taking time away from real work problems to let people show off their poorly-conditioned ideological muscles.

This topic was automatically closed after 700 days. New replies are no longer allowed.